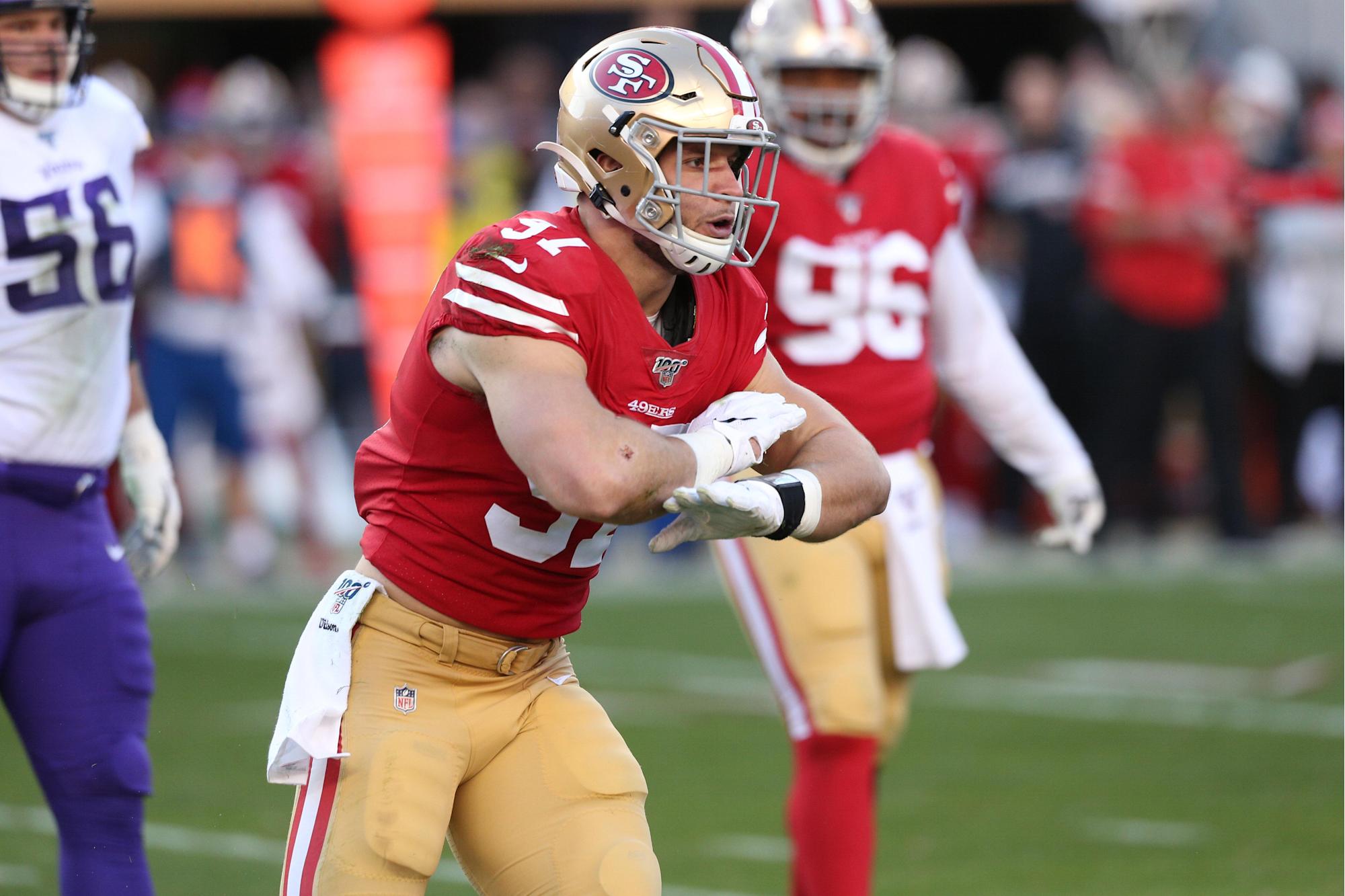 The NFL doesn’t appear to be in line for expansion any time soon. However, the NHL’s expansion draft for the newly-former Seattle Kraken got us wondering which players the 49ers would protect if the NFL added a team and executed an NHL-style expansion draft.

An expansion hockey team is allowed to pick their roster from a pool of the NHL’s active players. The non-expansion clubs are able to protect up to 11 players (seven forwards, three defensemen and a goaltender).

For our purposes we’re going to split the NFL’s protected player rule down the middle. Five offensive players, five defensive players, and one specialist. We’ve also made rookies exempt.

This is what the 49ers’ protected list may look like if we turned the clock back to before the draft, but after free agency:

This is an easy pick for the 49ers. Kittle is arguably the best tight end in the league and he wouldn’t make it through the expansion draft if they didn’t protect him. It’d be impossible to quickly replace such a vital piece of their offense.

This is another easy one for many of the same reasons as Kittle. Williams is still elite and left tackle is perhaps the second most important position on the field. Finding a great one isn’t easy, so keeping one if you get it is vital.

Aiyuk is in Year 2 of a rookie contract and looks on track to be the 49ers’ No. 1 wide receiver this season. He’s an explosive, versatile athlete who should put up big numbers for as long as he’s in Kyle Shanahan’s offense.

The 49ers have made it a point to give Juszczyk two lucrative contracts both times he’s been a free agent since Shanahan arrived in 2017. It’s hard to imagine they’d risk him getting scooped in an expansion draft, especially if the team is run by a head coach from Shanahan’s coaching tree.

A fifth offensive player is tough to figure out. Any of their offensive linemen they had before the draft would’ve made sense – Alex Mack, Mike McGlinchey or Laken Tomlinson. However, it stands to reason they could’ve filled any of those voids with some of the players available on their roster or via the draft knowing an expansion draft was coming. Samuel, on the other hand, has two years of his rookie contract left and brings a hard-nosed dynamic to the 49ers’ offense that isn’t easily replicated. Not to mention the 49ers’ depth at receiver isn’t particularly strong, so one of their two top pass catchers has to stick around.

The 49ers are about to give Warner a sizable contract extension to keep him in San Francisco for the foreseeable future. They’re not letting the NFL’s best young linebacker get away for nothing, and an expansion club would jump on the opportunity to build their defense around him.

For all the reasons the 49ers would want to protect Warner, they’d also want to keep Bosa who’s entering Year 3 of his rookie deal in 2021. He’ll be extension-eligible next offseason and it stands to reason he’ll become the NFL’s highest-paid defensive player if he stays healthy and on the trajectory he set for himself as a rookie in 2019. Bosa is a franchise cornerstone and the 49ers wouldn’t let him get away.

Trading DeForest Buckner and then immediately letting his replacement slip away in an expansion draft would be something close to malpractice by the 49ers’ front office. Even though the acquisition of Aiyuk came as an additional branch off the Buckner deal, it wouldn’t be worth letting Kinlaw go. Enough with the business of the deal though, Kinlaw might be a star in the making. He had an up-and-down rookie campaign, but it’s tough to jump in and thrive on the interior. He flashed enough in 2020 to give some optimism about his future as a force in the middle of the 49ers’ defensive line.

The 49ers’ cornerback depth is pretty thin, which may entice them to hold onto a player like Verrett who’s coming off a career-high in snaps played and may have turned the corner on his injury woes. He’s also on a cheap one-year contract. Emmanuel Moseley is probably more liable to slip through the expansion draft than Verrett, and leaving K’Waun Williams exposed is okay since Moseley, rookie Deommodore Lenoir and Jimmie Ward can all play in the slot. This is a tricky one, but the veteran gets the nod after playing at a Pro Bowl level last season.

Ward’s versatility to play multiple positions makes him valuable, but he thrives in the 49ers’ defense as a free safety. Even though the turnover production isn’t there, he’s a very good tackler with great range and is a key reason San Francisco didn’t give up a ton of big plays in 2019. They may try to sneak him through, but their safety depth isn’t great and Ward is one of the more underrated players at the position in the league.