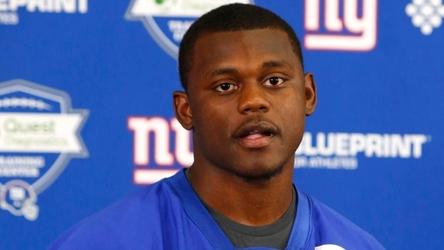 The law of averages means every team will have a few missteps in the NFL Draft. Here are some of the Giants’ most memorable misses over the years.

(For reference, we defined a “miss” as a player drafted in the earlier rounds who didn’t work out or live up to draft expectations).

Baker’s legal issues have been well-documented. After a steady if unspectacular rookie season, he was charged with armed robbery and aggravated assault in May 2020, though all charges were dropped that November. Still, he was released in September having played 16 games in New York.

Webb is the Christian Hackenberg of overzealous Giants QB picks. He never played a snap in the NFL, though he’s been on a team’s active roster for two games and is currently on the Buffalo Bills on a reserve/future contract.

Flowers was the ninth overall pick in 2015, playing 46 of 48 games in his first three seasons with the Giants. Unimpressed with his performance, New York tried to trade him halfway through his fourth season but ended up releasing him instead in October 2018.

Odighizuwa played in only four games during his rookie season because of injuries and 14 the next, but he was suspended for performance-enhancing drugs on the eve of his third season, which was enough to warrant a cut from New York. He never played an NFL snap again after that.

Bromley had an uneventful 57-game NFL career, but he’s a Jamaica, Queens native and the only player from Flushing High School to make the league since 1930. For that reason, we can’t be too harsh on him.

Hosley played out his four years with the Giants, racking up two interceptions and 13 pass deflections, though he never played more than 46 percent of New York’s defensive snaps in a season.

Austin’s Giants career amounted to eight games, eight tackles, no sacks and no tackles for a loss. New York moved on from him after his rookie season, and he played only 18 more NFL games after that.

Jernigan barely averaged more than one catch per game for his NFL career (38 catches to 34 games), but he did rack up 71 kickoff return yards in Super Bowl XLVI.

Sintim appeared in 24 games for the Giants, the fourth fewest of any selection in that year’s second round. His career in New York, and in the NFL, ended with two torn ACLs over the course of 2011.

Barden played three, six, eight and 12 games in his first, second, third and fourth seasons, respectively, but he never reached a fifth season with the Giants or anyone else, finishing his career with 29 receptions.

Sinorice, brother of Jets star Santana, did grab three touchdowns as a Giant but topped out at 225 yards in a season. He played only 37 NFL games in four seasons, all in New York.

Hatch’s career ended before it ever got the chance to get going. After missing his rookie season because of injury, he played four games in 2003, then kicked around on a few practice squads but never played another NFL snap.