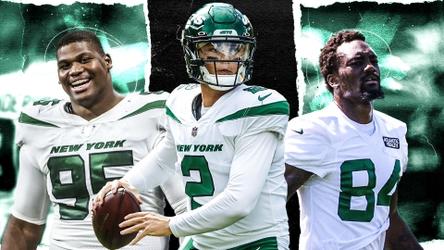 While minor transaction and waiver wire pickups can still happen, every NFL roster is down to 53 men heading into Week 1 of the regular season.

For the Jets, GM Joe Douglas made some tough calls and put together what he believes is a team that can contend for new head coach Robert Saleh and his staff. But, of course, it isn’t perfect and moves can be made at any time to bolster positions that need some help.

What might those positions be? And which ones are the strongest heading into the matchup against Carolina?

It has been a position of need the last two seasons, and I think Douglas figured it out. Davis has looked as advertised, and though it’s been against 2s and 3s on defense, seeing the chemistry Zach Wilson has with him already is a great sign for things to come in the regular season.

Also, when healthy, Elijah Moore is going to be a problem – in a good way. He was a camp standout who was turning heads left and right, and also built chemistry with Wilson. With Jamison Crowder, Keelan Cole, Denzel Mims and Braxton Berrios all on the team as well, that’s a solid depth chart to work with heading into Week 1.

Yes, the losses of Carl Lawson and Vinny Curry hurt. But Douglas was quick to add Shaq Lawson, who could find his first-round talent that hasn’t peaked just yet. The interior is also extremely solid with Quinnen Williams entering his third season and coming off a promising sophomore campaign. He’s surrounded by Sheldon Rankins and Folorunso Fatukasi. John Franklin-Myers, Bryce Huff, and Nathan Shepherd make for great depth all around.

In Saleh’s new scheme, this is his specialty up front. And he likes the group he’s had since the start of camp.

Wilson has shown nothing but poise, confidence, and desire to get better each day since arriving at One Jets Drive. So, for a position that could’ve had loads of question marks, Wilson has checked all the boxes thus far.

Of course, things change when the regular season starts. But Wilson seems to be grasping Mike LaFleur’s offense well to this point and it will only gradually get better each game. It doesn’t help that Josh Johnson was cut and Mike White, someone who doesn’t have any NFL experience on his resume, is his backup.

But Wilson is the future and he’s determined to prove that. He’s off on the right path now and the Jets must be confident, too, to have him under center against the Panthers next Sunday.

In a surprise move, Bless Austin was just released by New York and apparently they were looking to trade him before letting him go. That leaves just Bryce Hall and sixth-round rookie Brandin Echols as the starters for the moment.

This was a position group with lots of questions entering training camp and they leave it now with even more. New York did just add Cleveland Browns fourth-round pick Sheldrick Redwine to their active roster, but he’s played free safety in his two seasons. Does Douglas have something up his sleeve? Potentially. But as of now, this is the thinnest group filled with young unproven talent.

Chris Herndon is out, heading to the Minnesota Vikings after a Jets tenure filled with ups and downs. Ryan Griffin and Dan Brown were also cut, though, which could have just been business moves with one of them potentially coming back.

Either way, Tyler Croft – the only current tight end on the roster – is serviceable at best. He did catch a preseason touchdown against the Green Bay Packers, so he’s at least shown he can help out when the ball comes his way.

Maybe that’s all LaFleur will work with at that position this season. Don’t expect big production to come from here.

This one is borderline because C.J. Mosley could prove that he’s his old Pro Bowl self after sitting out in 2020. But there’s no telling what will happen until games start.

Losing Jarrad Davis for the first few games of the season, too, is a bummer for Saleh, who is now looking to rookie Jamien Sherwood to step up in his place. Blake Cashman is also on the depth chart and has shown flashes of good play. Another rookie, Hamsah Nasirildeen, proved his worth in camp as well as Williams’ brother, Quincy Williams, who was just picked up on waivers.

There are just too many question marks here to be confident heading into the season.

Two fall into this category for me: Johnson and Austin.

When Johnson joined the Jets, a sigh of relief came from just about everyone because White and James Morgan didn’t have any NFL experience behind the rookie Wilson. Johnson knows LaFleur’s scheme and he was putting in good reps during preseason. But he was released.

Another veteran QB – hi, Brian Hoyer – could eventually join the team. For now, fingers and toes crossed while knocking on wood that Wilson remains healthy.

Austin was pegged to be a starter and he had a chip on his shoulder to prove himself. But he’s now a free agent and another team should claim him at some point. The Jets must have something in the works at corner because if not, Austin’s release just doesn’t make too much sense.