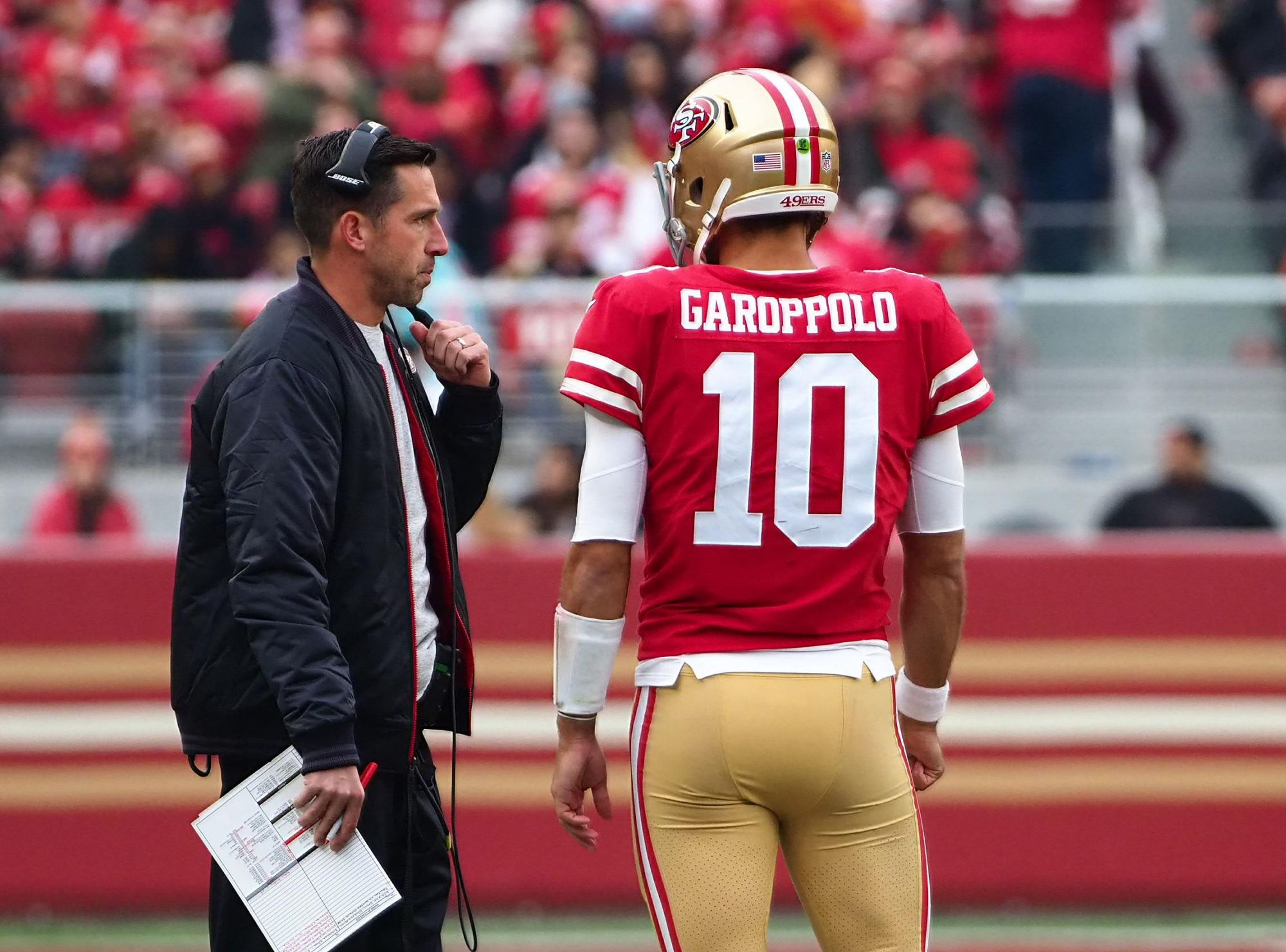 It’s not difficult to suss out the 49ers’ short and long-term plans under center. They’re trying to have their cake and eat it, too – threading a needle where they hold onto their short-term Super Bowl hopes by keeping Jimmy Garoppolo, and establishing a long-term answer at the game’s most important position by shelling out three first-round picks and a third-round selection to move up to No. 3 in this year’s draft.

The move isn’t unprecedented, but it’s one that may not satiate the appetite of fans looking for a dramatic overhaul at the position that’s been in flux for the 49ers for the better part of the last two decades. It may also buck conventional team-building wisdom that says paying a lame-duck quarterback $25 million while leaving the player the team traded three first-round picks to get on the bench is poor roster management.

That appears to be what the 49ers are primed to do though with Garoppolo still installed as the starter for 2021, and the team aiming to use the No. 3 pick on a player who best helps down the line.

“You look at our team and everything, and you want to have an idea of what this guy can do right away, how he fits in your team right away and what that means for the future, but I don’t think you want to make a decision to move up to three and do what we did just based off of what’s the best for one year,” 49ers head coach Kyle Shanahan said Monday in a press conference. “So, you want to take that into account, especially when there’s a number of candidates there. It’s not like there is just one guy. So, when there’s three to five guys who could be there, you’re going to take all that into account, but we’ve got to make sure we get the right guy for the future, not just this year.”

There’s a very good chance Shanahan and the 49ers have evaluated this year’s quarterback class and fallen in love with a player they don’t deem ready to start right away. Shanahan in his press conference mentioned specifically how evaluating players like North Dakota State’s Trey Lance and BYU’s Zach Wilson is difficult because of their truncated 2020 seasons due to the COVID-19 pandemic.

The combination of limited college experience, what looks to be another virtual offseason for NFL teams, and a complex offense like Shanahan’s is a recipe for disaster for a rookie signal caller. San Francisco doesn’t have the margin for error a first-year quarterback has on a team without playoff hopes. The 49ers are trying to win a Super Bowl in 2021, and they have a roster to do it. Resting those hopes on the arm of an ill-prepared rookie would be more reckless than letting the No. 3 pick sit for a year (or however long it takes the team to deem the rookie ready for action).

Super Bowl contention this season is where Garoppolo’s importance to the club surfaces. While his health has been an issue, his performance hasn’t been so poor as to warrant an immediate ouster. His shortcomings as a passer do hold the 49ers’ offense back from reaching its pinnacle. He’s good enough to get the team to the Super Bowl though. That’s what San Francisco is banking on this year.

Riding Garoppolo for another year gives the 49ers the ability to keep their Super Bowl window open and develop the quarterback they’ve invested in at the proper pace. Throwing that quarterback to the wolves because of the draft capital it took to get him isn’t worth potentially hindering his long-term prospects.

It may be a little unorthodox, but that’s what this situation warrants. Super Bowl-caliber teams don’t often pick in a place that affords them the opportunity to trade up to No. 3 in the draft. The 49ers landed a number of key free agents that opened the door for a move they needed to make in order to secure a long-term answer at quarterback.

Garoppolo has the team’s support for now because they believe he gives them the best chance to win the Super Bowl this year. That’s not a far-fetched idea given the caliber of their roster. The No. 3 pick will become a factor in 2022 and beyond, when he’s had a chance to develop and becomes the team’s best option to win a championship.

There’s no guarantee any of this is going to work, of course. But a life in the NFL without a little risk-taking is a short one. The 49ers have a chance to walk a line very few teams get to walk by preparing long-term at quarterback while competing for a championship right away, and they’re taking full advantage.