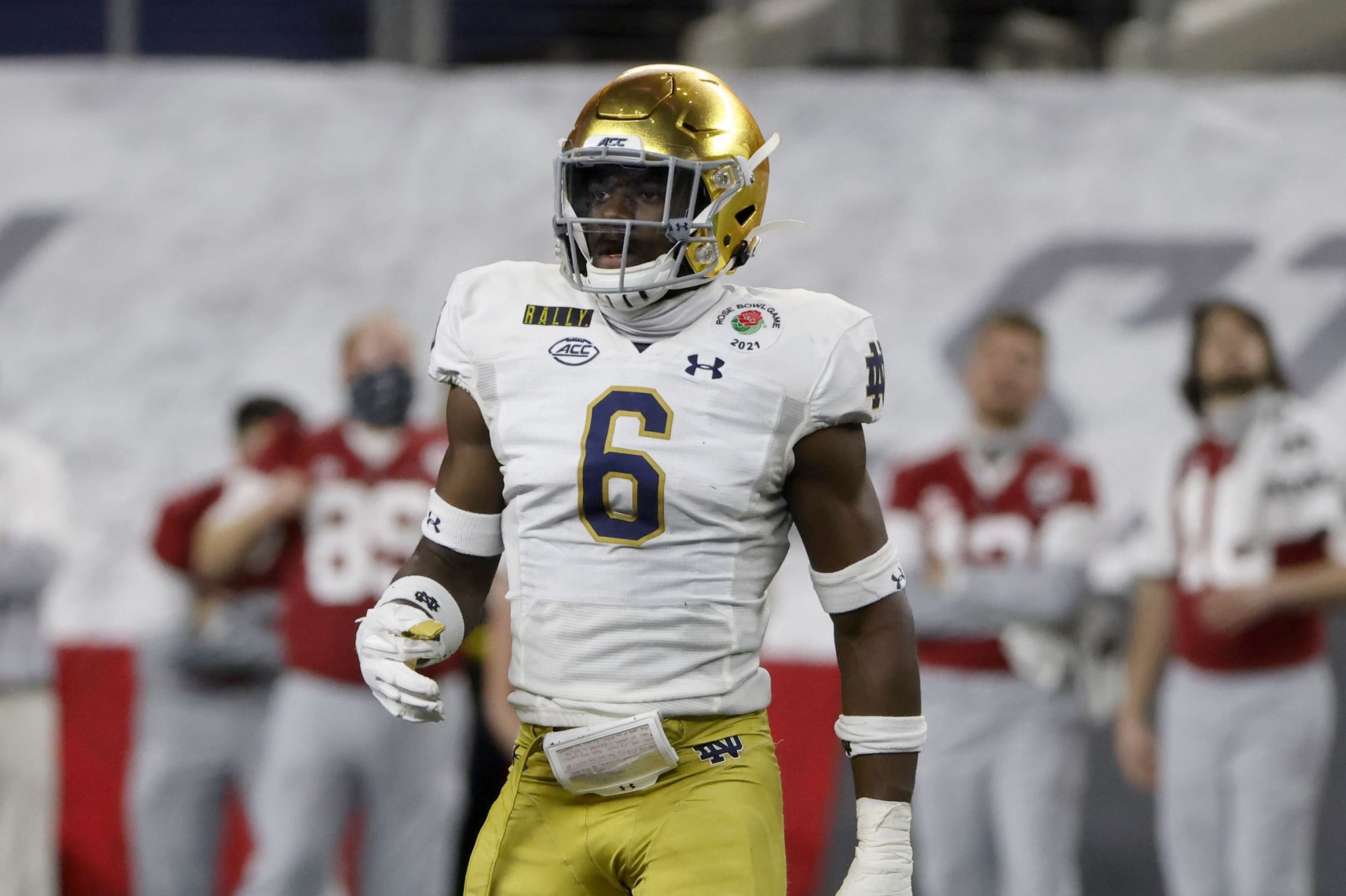 There are a lot of questions surrounding the linebacker position for the Dallas Cowboys. With the addition of Dan Quinn, fans can expect the linebackers to take on a different role than what they are used to seeing. That could come from what’s in house, but there also could be additions in the 2021 NFL draft who could help at the position.

Vander Esch showed the ability to be an impact defender on the second level but has been unable to return to his rookie year form given his injury riddled career thus far. Jaylon Smith on the other hand has been able to stay healthy but has incredible inconsistencies in his game. Lee, Neal, Bernard and Gifford are all fine backups and role players, but none fill the coverage void the Cowboys have desperately needed filled.

As this 2021 draft series rolls on, a look at a linebacker prospect from each round is in order.

https://twitter.com/FarabaughFB/status/1327738648469663746?s=20 While some don’t see the JOKer as a pure linebacker, that’s fine, he doesn’t need to be one. With the selection of Owusu-Koramoah, a team gets a defensive switchblade who does not play in the box but rather around it. His range, play speed, and coverage ability is that of a safety and his instincts, motor and blitzing ability allow him to play close to the LOS, whether this is as a slot overhang or a big nickel. His versatility would allow for a multitude of looks which would give Quinn a handy weapon to kick off his time in Dallas with.

https://twitter.com/RealD_Jackson/status/1360468135997042690?s=20 The former North Dakota State standout transferred to LSU for his redshirt senior season and proved the talent he showcased at the FCS level was no fluke. Cox has one of the best coverage-athletic profiles in this draft, combining loose hips and swift feet with instincts and playmaking ability in coverage. He possesses good size, although he can afford to add strength to help out while shedding blocks. He can enter The Star day one and provide a much-needed coverage boost to our second level as a late down Will linebacker.

https://twitter.com/DanteCollinelli/status/1284145988899409921?s=20 Werner made his name in the crowded Ohio State linebacker room with his ability to play on all three downs. He combines ideal size, standing at 6-foot-4 and around 240 pounds, with solid mobility and good range and instincts in pass coverage. Although he struggles when taking on blocks consistently, he is extremely physical with a hot motor and has shown the ability to shoot gaps as a blitzer. Werner fits into the mold of a Vander-Esch and can fit perfectly as a backup in Year 1 who can potentially progress into a long-term starter.

https://twitter.com/All22_Addict/status/1367024272544174080?s=20 This is a player who oozes potential. Davis has fantastic play speed in addition to great length and physicality built into his tough and compact frame. In coverage, he is not as fluent as others on this list, but his range and competitive toughness are undeniable. As a one-year starter for the Wildcats, Davis has yet to log many starts under his belt but given what he showcased in the 2020 season, there is plenty of reason to be excited for his future. He projects best as a developmental piece and a core special teamer.

https://twitter.com/RealD_Jackson/status/1295718177859612674?s=20 Wallow does not possess the elite traits others have but brings a level of consistency which is not often found late in the draft. He is extremely able when left in coverage and has the athleticism to produce as an off-ball linebacker given his history as a former safety. While he can serve to add a bit more weight to his frame, his tackling does not lack the requisite strength, even able to pop guys in the chin from time to time. Wallow brings the aggressiveness, high motor and leadership wanted from a linebacker making him a great option as a developmental backup or as a spot starter.

https://twitter.com/MHolder95/status/1354939703452184578 A former Arizona Wildcat turned West Virginia Mountaineer, Fields is an undersized linebacker, standing at only 6-foot-1 and 220 pounds. Due to his frame, he struggles with play strength when block shedding, tackling and blitzing. Despite these obstacles, Fields has arguably the best motor in this class and has the coverage ability as well as the play speed to line up in a multitude of positions. He boasts natural instincts, showing some hope he can get onto the field in passing situations day one. Although there is a lot to like with Fields, there is a fair worry he is only a player for passing downs.

https://twitter.com/chumbleycolton/status/1249471542007869446?s=20 A Plano, Texas native, Hines does not excel at any one thing specifically. He brings a solid blend of speed, effort and coverage ability to the linebacker position packed into a lean-built frame. Similar to many on this list, however more severe, he does not possess the requisite play strength to hold up consistently when taking on blocks and can get completely erased from plays. Hines did not play in 2020 and has one year of starting experience, leaving questions as to how his development will go from here.

Other Articles in the series: