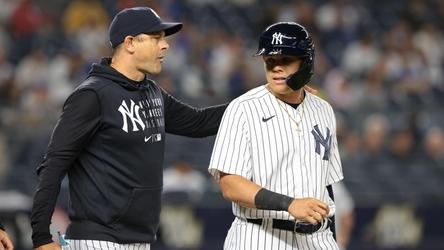 The Yankees’ injured list roster would probably be in first place in the NL East – they just added Gleyber Torres.

It’s a crowded room, and manager Aaron Boone provided updates, some good some bad, on some of his injured players:

Boone broke the news that Urshela suffered “a little bit of a setback” in his rehab from a hamstring injury, and will not likely return to the team this week. Instead, he has remained in New York, but he doesn’t think the setback is “that serious.”

The righty tossed four perfect innings that led the way to a combined no-hitter for the Somerset Patriots, and Boone said he “looks and feels really good.”

Boone said he will make another rehab start on Friday, “get built up a little bit more, and then we’ll probably have a decision in front offs” whether his next start after that will be another rehab outing or with the big league club.

Boone said German “should be close to starting to throw again,” and he should “ramp up pretty quickly” when he does start throwing.