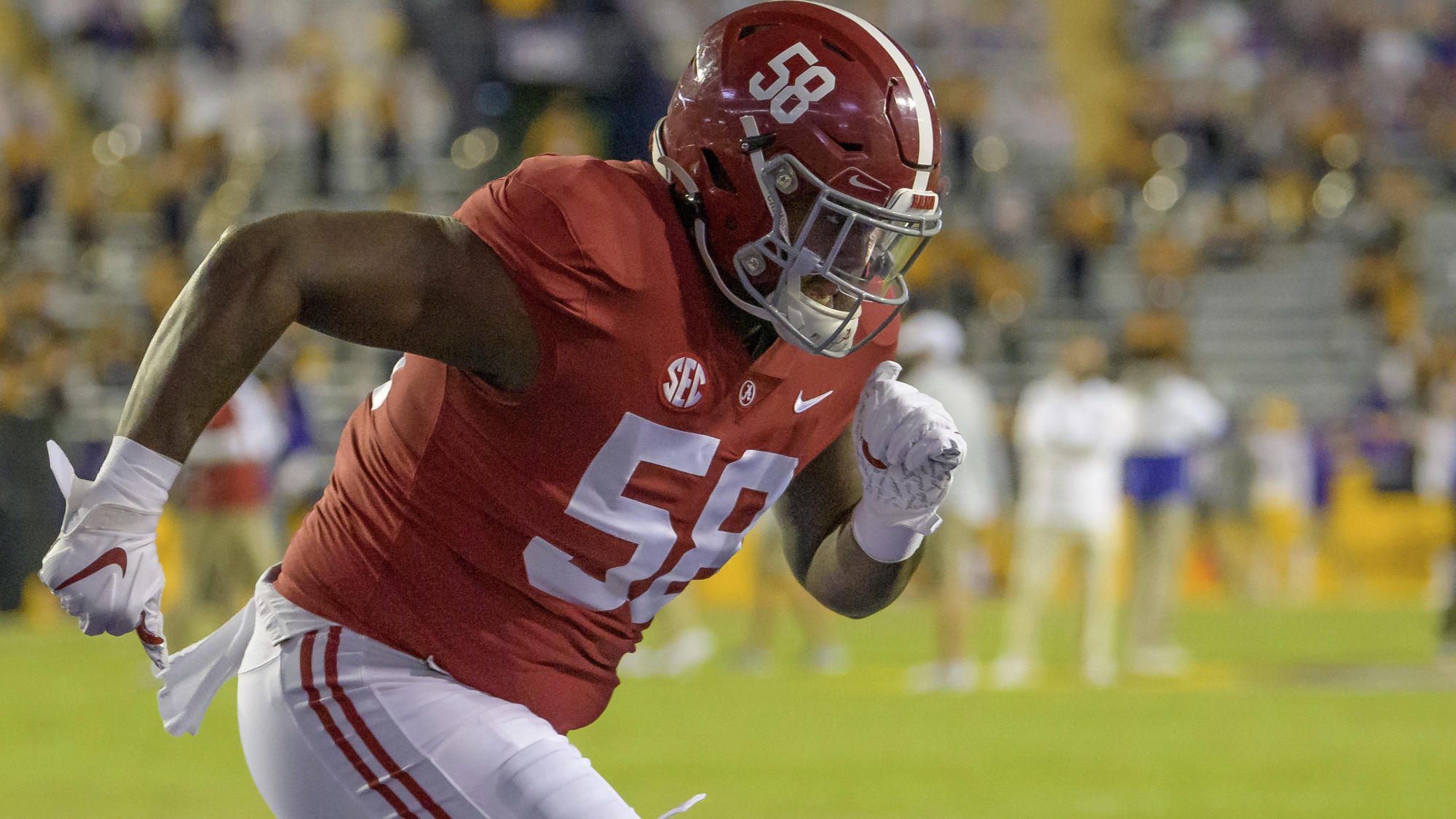 The skinny: A 4-star Rivals recruit out of the Philadelphia area, Barmore picked Bama over nearly 20 offers and redshirted as a freshman in 2018. In 2019, Barmore saw the field in 12 games (one start) making 26 stops (six for losses), two sacks and two pass breakups and was named to the all-freshman SEC team. He stepped up as a redshirt sophomore in 2020 to make 37 tackles (9.5 for loss), eight sacks, three forced fumbles and three pass breakups in 12 starts, missing the opener with an injury. Barmore was named third-team AP All-America and first-team All-SEC for the national champions, earning College Football Playoff Championship Game Defensive MVP vs. Ohio State, making five tackles (two for loss) and a sack in the dominant performance. Following the season, he declared early for the 2021 NFL draft.

Upside: Tremendous potential as interior disruptor. Pressure-to-snap ratio is excellent. Was one of the best interior players in the country in the second half of the 2020 college season.

Great 40-yard dash time (4.97 seconds), with solid 10-yard split (1.76 seconds). Terrific burst off the line to tax lumbering guards. Quick, fairly light feet. Good balance and flexibility — not on the ground a lot. Rare to see him overwhelmed at the point of attack. Can work down the line and make plays laterally.

Lined up in virtually every technique along the line and rushed from both sides. Used effectively on stunts and twists to create pass-rush opportunities. Started to finish better last season and appears to be on the verge of unlocking his full potential. Robust hitter who make his contact count — delivered some punishing shots. On-field bully who doesn’t back down from a street brawl.

Downside: Inexperienced — a mere 747 defensive snaps in college. Only 24 career games and six starts. Still raw — continuing to figure things out on the field. Will turn 22 years old this spring. Late bloomer who turned focus to football later in his high-school career.

Disappeared in some contests. Pass-rush efficiency varied wildly game to game. Quiet in SEC title shootout vs. Florida. Can vacate his gap and run himself out of the play with wide rush angles or freelancing style. Requires more discipline in his approach. Not a reliable tackler yet — lets runners get out of his grasp too often.

Might not be an ideal two-gapper in the NFL. Often asked to hold the point in Bama’s read-and-react defense and was hit or miss controlling multiple gaps. Can struggle against bigger interior blockers. Still learning how to defeat or stalemate double teams.

Fails to locate the ball at times — sucked in on draws and screens. Can be stubborn to make his initial rush work, even after it’s been stalled. Will get half-manned and turned sideways on tandem blocks. Doesn’t always win leverage battles vs. the run. Tends to play high — pad level can be improved.

Best-suited destination: Barmore is an ascending prospect who carries some risk. But his talent base is strong enough where NFL teams are fascinated with what he can become.

With his combination of power and athleticism, plus his decent versatility, there’s no reason to think that Barmore can’t emerge as a three-down defender who has an impact against the run and the pass in time. It just might take some time to fully unlock it.

Did you know: Since the 1999 NFL draft, there have been 69 defensive tackles drafted in Round 1 — an average of 3.3 per year. The only draft in which there was no defensive tackle taken in the first round during that span was in 2017, when Malik McDowell (35th overall, Round 2) was the highest taken.

Many around the league believe Barmore has the best chance to be the one DT to land in Round 1 in this year’s class, although Washington’s Levi Onwuzurike also has an outside shot to join him in the first 32 picks.

Player comp: Style-wise, he’s somewhat comparable to Ndamukong Suh, although Barmore isn’t nearly as refined a prospect as Suh was coming out.