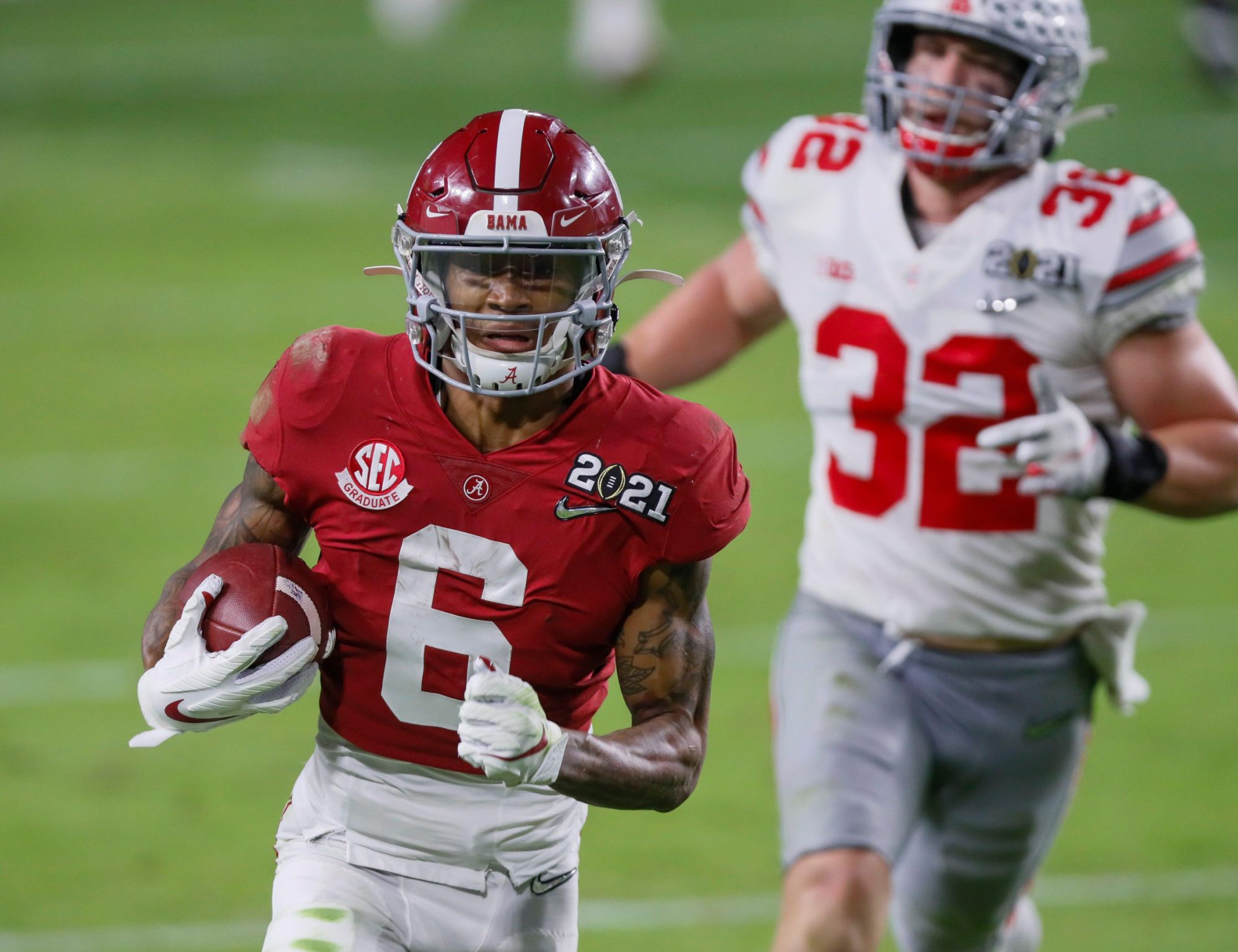 DeVonta Smith‘s weight is a mystery no more.

The Heisman Trophy-winning Alabama receiver who could be in the mix for the Detroit Lions with the No. 7 pick in next month’s 2021 NFL draft said Monday he weighs the “same thing I’ve been weighing” – 170 pounds.

Smith’s thin frame and light weight are the biggest questions evaluators have about whether his college dominance will transition to the NFL.

He declined to weigh in at the Senior Bowl last month but downplayed his size as an issue Monday.

“I feel like it’s not going to be no different than college,” Smith said. “I mean, I played against some of the best in college. I played in the SEC. I feel like it’s the toughest conference there is, so I know a lot of people that’s bigger than me that have more problems than me so I’m not worried about it at all.”

Smith stands to be the second-lightest receiver ever drafted in the first round, according to ESPN. The Baltimore Ravens took Marquise Brown, who weighed 166 pounds, with the 25th pick of the 2019 draft.

Brown has 104 catches for 1,353 yards the past two seasons but was a less accomplished player than Smith coming out of college.

Smith had an electric 2020 season, when he helped Alabama win the national championship with 117 catches, 1,856 yards and 23 touchdowns. He also led the Tide with 1,200 yards receiving and had 14 touchdowns in 2019, when he played alongside two other first-round receivers, Jerry Jeudy and Henry Ruggs, and a third (Jaylen Waddle) who is expected to be a top-15 pick this spring.

Other lightweight receivers who have had illustrious NFL careers include Marvin Harrison and Isaac Bruce, who were both listed in the 180-pound range.

NFL Network analyst Daniel Jeremiah said earlier this month the Lions could not go wrong taking any of the top three receivers in the draft, Smith, Waddle or LSU’s Ja’Marr Chase.

“I think it’s kind of a flavor thing with Waddle and DeVonta Smith,” Jeremiah said. “Waddle gives you a little bit more juice, but DeVonta Smith plays plenty fast as well. DeVonta Smith is a pristine route runner. He’s obviously, everybody knows, is real thin, but man he’s really long-armed, he can go up and get it as well.”

MOCK DRAFT: Panthers trade with Jets to upgrade at quarterback

Smith said he sees himself as both an inside and outside receiver in the NFL.

“I feel like I’m a receiver that can play anywhere, so really just putting me anywhere and just buying into whatever the team needs me to do,” he said.

And he said he will not do anything but weigh in for teams at Alabama’s pro day Tuesday.

“I feel like there’s expectations with everybody that wins the Heisman,” he said. “Everybody expects you to do this and that. I have my individual goals and things like that I expect myself to accomplish, so really just doing the things that I know I’m capable of doing, and just letting everything else just work out for itself.”