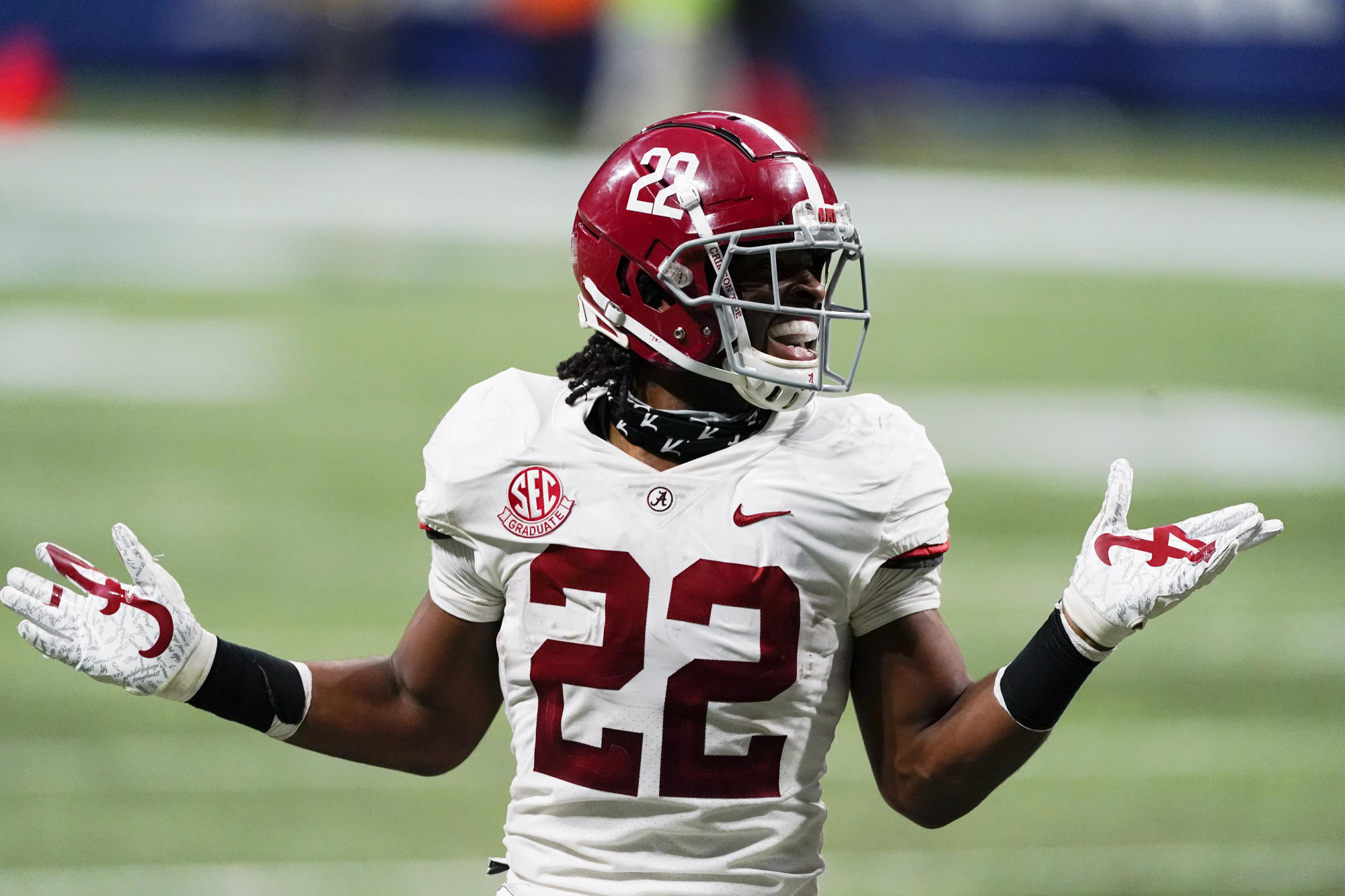 TL;DR scouting report: Bruising back with shockingly light feet and strong receiving ability, but not a home-run hitter

The skinny: A 5-star Rivals recruit, Harris was the No. 1 overall prospect in the Class of 2017, first committing to Bama back in the spring of 2015 and enrolling early in January 2017. He saw time in all 14 games (zero starts) for the national champs that year, running 61 times for 370 yards and three scores and catching six passes for 45 yards. In 2018, Jacobs ran 117 times for 783 yards and four touchdowns, catching four passes for 7 yards in 15 games (zero starts) as a reserve behind Damien Harris and Josh Jacobs.

Harris became Bama’s lead back in 2019, starting 12 of 13 games and earning second-team all-SEC honors in rushing 2019 times for 1,224 yards and 13 TDs with 27 catches for 304 yards and seven touchdowns. He returned to school as a senior and helped the Tide win their second national title during his career. In 2020, Harris ran 251 times for 1,466 yards and 26 TDs, also catching 43 passes for 425 yards and four TDs, winning the Doak Walker Award (nation’s top back) and named first-team All-SEC. He had to pull out of the Senior Bowl because of a late-season ankle injury but did attend practice and interview with NFL teams.

Incredible contact balance — can shrug off tackle attempts and even pinball off defensive linemen trying to take him down. Broken-tackle machine. Keeps his feet moving on contact. Tough runner who gets downhill and delivers a blow as a finisher. Great stiff arm. Always falling forward.

Tremendous production — 57 career touchdowns despite being a third-string back for two years. Career 6.0-yard rush average and maintained his average with increased carries. Showed he can handle a heavy load with 460 carries and 80 receptions over his final 26 college games. Eight games over the past two seasons with 25-plus touches.

Has some smaller-man wiggle to him — good quickness to change gears or shift directions. Some creativity you might not expect in his run style, including an open-field hurdle and a jump cut that can stun defenders. Really light feet for a big man. Capable of running inside and out, and in man- and zone-blocking systems well. Shows great patience to allow blocks to develop up front.

Expanded his third-down value significantly — went from overlooked as a receiver his first two years to running a solid route tree (including wheels and angle routes), improving his already natural hands and making some highlight receptions. Averaged 10.4 yards per catch past two seasons and had only three career drops on 100 targets. Willing pass blocker whose effectiveness improved, especially late in the 2020 season — delivered a few blows.

Only three career fumbles on 787 career touches. Showed outstanding effort, making six tackles after turnovers the past two seasons — including saving a touchdown vs. Texas A&M by chasing down an Aggies player who had a 10-yard head start.

Physically and mentally tough. Hyper-competitive. Well-liked and respected by teammates and praised by the Bama coaching staff.

Downside: Incomplete athletic profile — didn’t work out at pro day because of his ankle injury. Lack of straight-line speed compared to other backs. Not terribly explosive or twitchy. Singles and doubles hitter — doesn’t break many long runs. Only three career gains of 40-plus yards and none longer than 53.

Inconsistent vision — got better at spying lanes in 2020 but can still guess wrong and take poor angles. Lacks ideal rhythm and tempo as a runner at times. Not able to string moves together in open space like some more creative runners. Has some short-yardage runs where he blasted into his own blockers’ backs.

Has taken quite a bit of contact — improved at side-stepping big hits last season but run style still leads to enduring some wallops. High-cut back — runs upright outside, which increases his target zone. Will enter the NFL already having turned 23 years old, with nearly 800 college touches. Long-term durability might be a concern — has knee and ankle issues in the past.

Pass protection remains a work in progress. Can do a better job of surveying the rush landscape and IDing the biggest imminent threat. Will also lunge a bit wildly with his blocks and not square up blitzers crisply.

Suspended for the first quarter of the 2019 season opener, reportedly for missing a team meeting. Scouts say his ego needs a little boosting at times (but it’s nothing that lowers his draft grade).

Best-suited destination: Any team seeking to add a dose of physicality to its run game will want Harris. He’s a foxhole back who can pound the ball inside and also make people miss. Harris’ few major shortcomings — such as improving his pass protection — are fixable. He’s a tough, physical three-down runner who can upgrade a run game and add a dimension with his receiving ability.

Did you know: Harris survived a tough upbringing, living in cars, motels and shelters and sometimes was shuttled between family members as a child. But worse yet, he and some of his five siblings and four half-siblings suffered from verbal and physical abuse from Najee’s father.

With help from his mother, Tianna Hicks, Harris found football — which acted as a form of daycare — and was able to escape a troubling home life.

“I guess you could say football was my savior,” Harris told Bleacher Report in January 2017.

Player comp: We like the Matt Forte comps we’ve heard for Harris, but here’s another name we thought of while watching him: Remember Deuce McAllister?