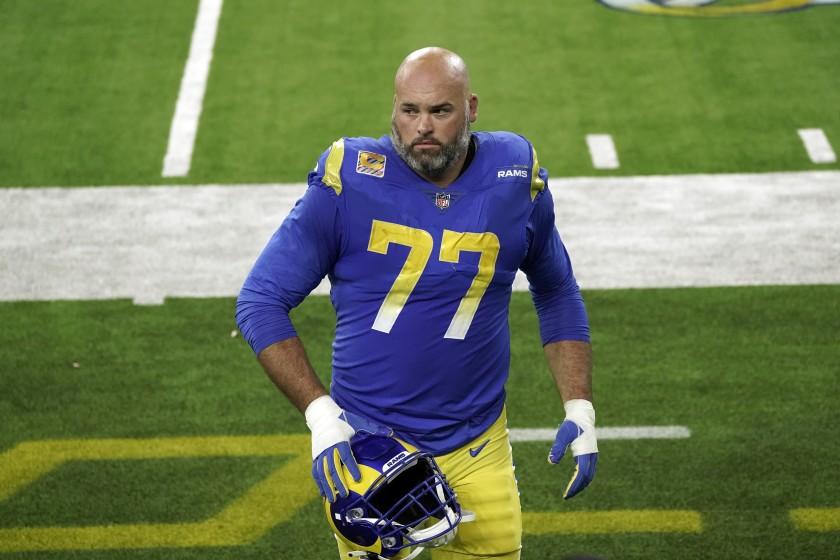 Whitworth did not initially envision that it would become a workout spot for Rams teammates. But the 15-year veteran said all offensive linemen, except for recently drafted rookies, have spent this offseason training together in his Westlake Village home gym.

“Most of the guys just call it ‘The Dojo,’ right now,” Whitworth said Tuesday during a videoconference, adding, “Everybody’s involved and invested in it and that’s made it unique. It’s created a really special bond between us.”

Whitworth, 39, is the leader of a line that must protect new quarterback Matthew Stafford for a team that will begin the season as a Super Bowl contender.

Whitworth will celebrate his 40th birthday on Dec. 12, the day before the Rams play the Arizona Cardinals in a late-season game on “Monday Night Football.”

“I tell him all the time, he’s like a fine wine,” coach Sean McVay said. “He gets better with age.”

Whitworth signed with the Rams in 2017 after playing 11 seasons for the Cincinnati Bengals. Last season he suffered a knee injury that forced him to sit out the final seven games. Whitworth returned for the playoffs, helping the Rams to an NFC wild-card victory over the Seattle Seahawks. The season ended with a divisional-round loss to the Green Bay Packers.

In February, McVay replaced Aaron Kromer, the Rams’ offensive line coach the last four seasons, with Kevin Carberry, who coached the last three seasons at Stanford. Carberry and the linemen have worked together for the first time during organized team activities, which conclude next week with a minicamp.

“Almost like a feeling-out process,” Whitworth said, “Like, ‘Hey, here’s some things we’re going to check, and see where are we with these things.’ ”

Whitworth said Bengals Hall of Fame tackle Anthony Munoz, who retired after the 1992 season, mentored and instilled in him the importance of offseason work, and the need to focus on individual improvement.

Whitworth gets in his work while enjoying the camaraderie of teammates. He said his garage is replete with squat racks, weight benches, dumbbell racks and cardio equipment to work on strength and mobility. There are other training devices as well.

“We got all kinds of nooks and crannies and little gadgets everywhere, in every corner, in every cabinet I can find stuffed with some kind of equipment,” he said.

Whitworth, 6 feet 7 and 330 pounds, has not given in to age. He follows a regimen that during the season includes a controlled, healthy diet. He acknowledged that he allows himself some dietary liberties during the offseason.

“Every time I DoorDash to Taco Bell, I feel it,” he joked. “So, my joints know what happened, I can assure you that.”

Whitworth aims to be in top shape when the Rams open the season Sept. 12 against the Chicago Bears at SoFi Stadium. He will be protecting the blind side of Stafford, a 12-year veteran acquired in a trade with the Detroit Lions for quarterback Jared Goff and two first-round draft picks.

As with Whitworth, Stafford joined the Rams after spending more than a decade in the Midwest with a team that did not win a playoff game.

“It’s almost invigorating, and then also a little nerve-wracking to come somewhere else where there’s expectation,” Whitworth said, adding, “It almost fires you up and makes you feel like a rookie again.”

After playing with Goff for four seasons, Whitworth — and younger Rams linemen — are getting acclimated to Stafford’s voice, snap cadence and movement. Whitworth said there is not a coverage scheme or defense that Stafford has not seen.

“He understands all of the little nuances of things that, there’s just no way you can have those without the time in the game and without the experience,” Whitworth said.