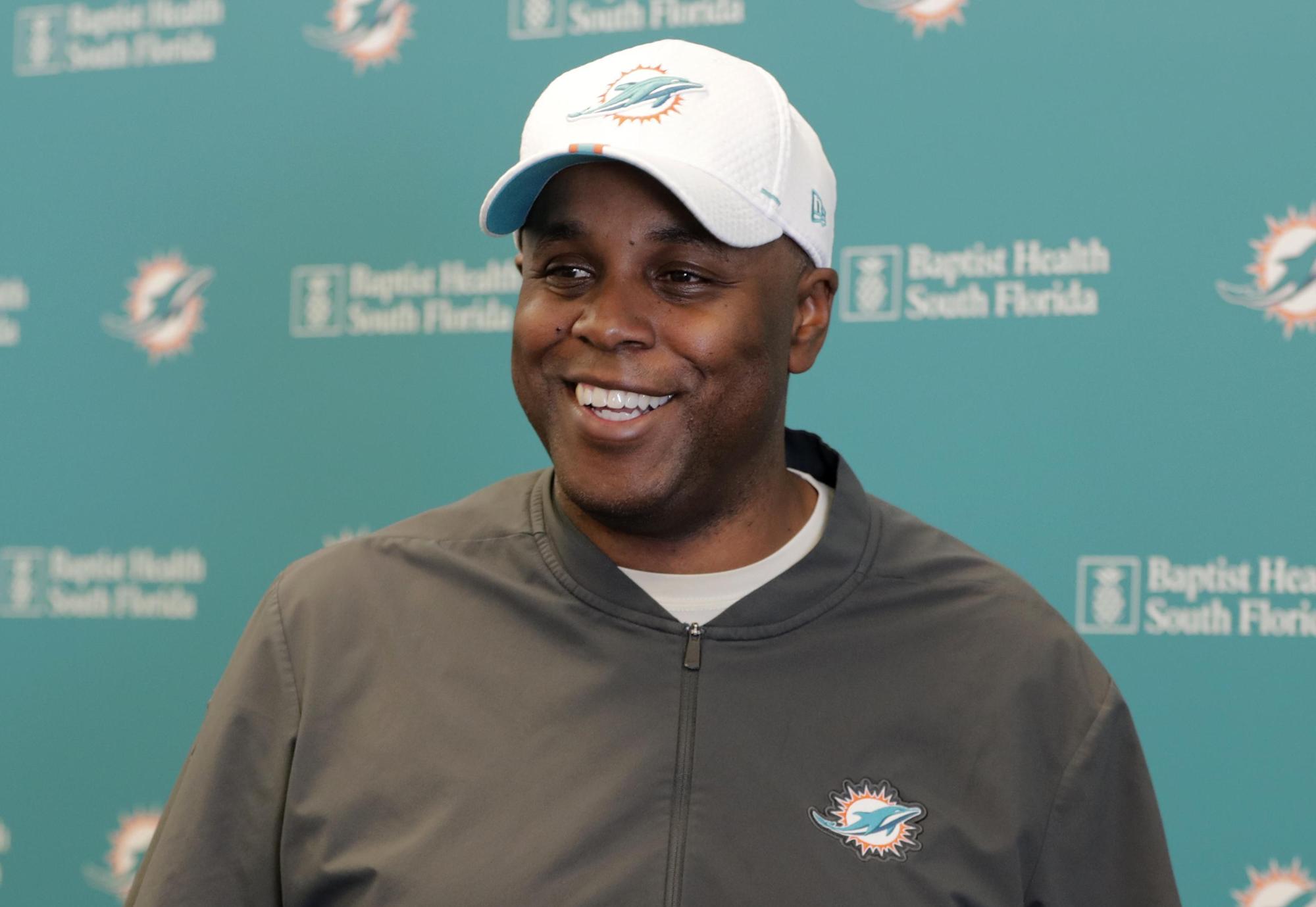 Chris Grier and the Miami Dolphins weren’t about to stay at No. 12, and they’re not married to the No. 6 pick in the draft, either.

Speaking to reporters at his annual pre-draft news conference Wednesday, Grier laid out how the Dolphins consummated their back-to-back trades out of their original No. 3 overall position and into No. 6 — but he also left the door open for yet another trade.

If that happens, it may not be until the Dolphins are on the clock next Thursday evening.

“As the draft falls and gets towards our pick, if someone wants to call and they make an aggressive pitch to us, we’ll evaluate it, look at the board, and look at our options,” said Grier, Miami’s general manager.

Probable translation: If receiver Ja’Marr Chase and tight end Kyle Pitts have been wiped off the board, the Dolphins will be answering on the first couple of rings. If either is available, the card might already be on the way up to Commissioner Roger Goodell.

NFL MOCK DRAFT: What might happen in first round if Cowboys, Broncos trade up?

The Dolphins owned the No. 3 pick as part of the return on the Laremy Tunsil trade with Houston, but San Francisco GM John Lynch valued it to land a quarterback. Even after he offered a package that included the No. 12 overall pick and first-rounders in 2022 and 2023, Grier didn’t feel his work was done.

“Once they gave us the offer that we were comfortable with taking, we decided it was important for us also as well to get back into that top 10,” Grier said. “And once it looked like San Francisco could happen, we kind of reached out to a few teams just gauging whether they would move or not.”

That brought the Dolphins and Philadelphia Eagles together — even if Philly wasn’t the first team Grier contacted.

Eagles GM Howie Roseman owned the No. 6 pick, so the deal they settled upon included the No. 12 the Dolphins had just received plus a 2022 first-rounder. The two blockbuster trades were announced together March 26.

Quarterbacks are all but certain to go 1-2-3 with the first picks, to Jacksonville, the New York Jets and 49ers. But notched at No. 6, the Dolphins could see No. 4 Atlanta and No. 5 Cincinnati take Pitts and Chase off the board or trade with teams that do. If that happens, Grier said he won’t be second-guessing himself.

“When we made our move, we had targeted a number of players that we liked, we’re comfortable with getting,” Grier said. “So I think with us, when you make a move like we did and doing what we did to get back up, we’re very comfortable where we are. …

“We won’t have any regrets.”

After a totally virtual draft last year because of the pandemic, the NFL is edging toward in-person selections this year. All teams will have one representative at the draft in Cleveland. The Dolphins will have the maximum allowed, 10, inside their draft room in Davie.

“Trying to get back to some sense of normalcy,” Grier said.

Wednesday was the first time Grier addressed reporters since the release of linebacker Kyle Van Noy after one season in Miami.

“We had a lot of young players that were developing and we felt good about, and those guys need to get on the field.”

Van Noy had six sacks last season, which the Dolphins didn’t feel justified his four-year, $51 million contract. Parting ways should mean an even greater role for players such as linebacker Andrew Van Ginkel, 25, who had 5.5 sacks but played only 46 percent of the defensive snaps. Grier cited the “jumps” made by Van Ginkel and tight end Mike Gesicki following their rookie seasons.

This article originally appeared on Palm Beach Post: Miami Dolphins could be open to another trade in 2021 NFL draft