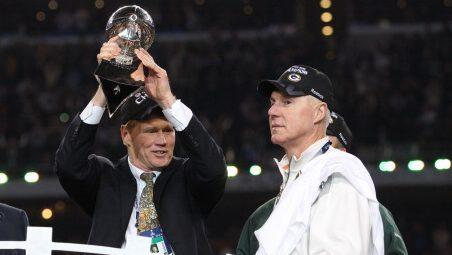 Packers CEO Mark Murphy has once again weighed in on the Aaron Rodgers situation, invoking the late Packers General Manager Ted Thompson as describing Rodgers as “a complicated fella.”

Speaking at an event at Lambeau Field, Murphy made a halting remark indicating that Thompson, who drafted Rodgers, considered Rodgers to be “complicated.”

“I’m often reminded though of Ted Thompson, as most of you know, just a great general manager, passed away this past year — excuse me, earlier this year, often talked about Aaron, that he’s a comp — and it wasn’t just Aaron, a lot of different players. He would say ‘He’s a complicated fella.’ So, I’ll just say that,” Murphy said, via NBC 26 in Green Bay.

Thompson, who died in January, isn’t here to explain what he meant by calling Rodgers and other players “complicated,” and it’s surprising that Murphy would ascribe that statement to Thompson.

But Murphy has now twice in a week brought up Rodgers when he didn’t need to, and done so in a way that was less than flattering to Rodgers. Murphy previously answered a question submitted by a fan to the Packers’ website — a question that wasn’t even about Rodgers — by saying that the Rodgers situation has divided the Packers’ fan base.

In that same answer, Murphy said, “the less both sides say publicly, the better.” And yet Murphy has again spoken publicly about Rodgers.