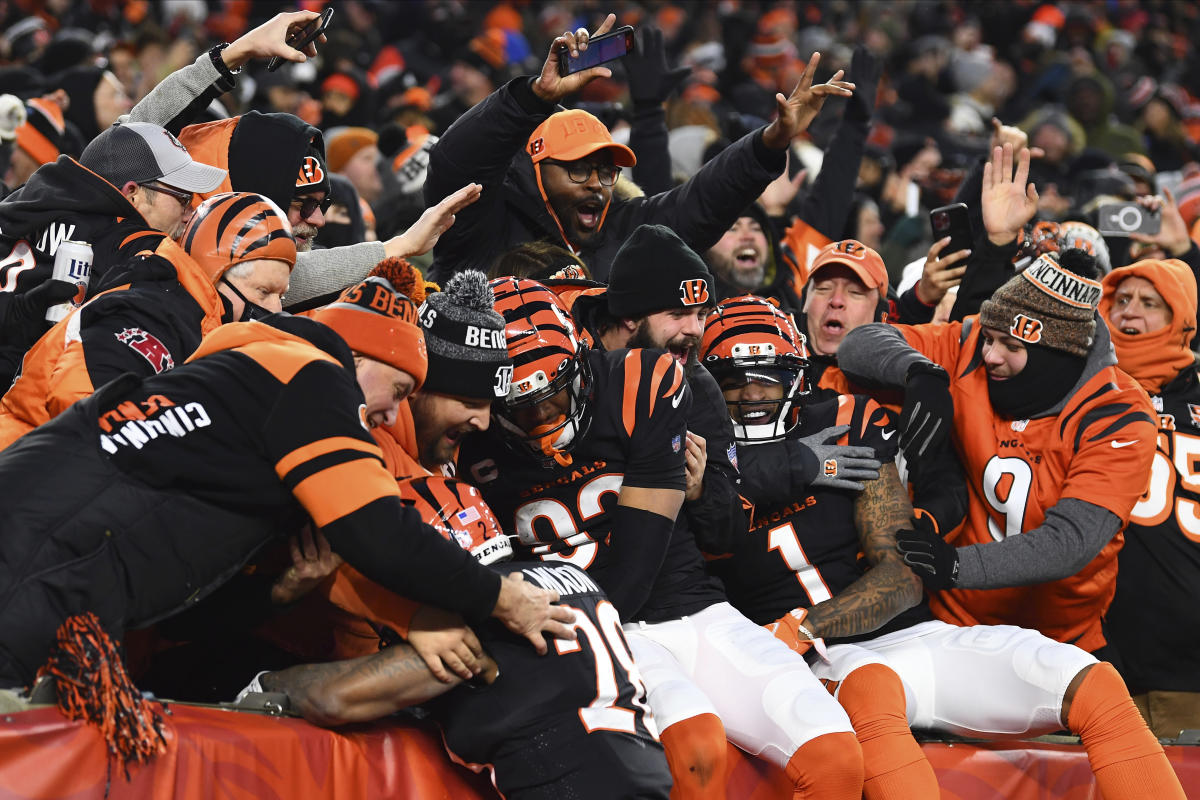 Text messages were flying all over Cincinnati and beyond on Saturday night in celebration of the Bengals‘ playoff win over the Las Vegas Raiders.

Given that pretty much everyone texts now, that was to be expected.

But it took on more significance after one fact circulated on social media: The last time the Bengals won at this time of year was Jan. 6, 1991.

That’s how long ago it was. The thing that for so many of us has become ubiquitous, our way of instantly communicating with loved ones and friends, didn’t even exist.

Once linebacker Germaine Pratt intercepted Derek Carr on the Raiders’ last chance to either tie or win the game, the texts could finally be sent.

The crowd at Paul Brown Stadium, unsurprisingly the largest ever at the facility, was positively euphoric when Pratt secured the goal-line pick.

Raiders kicker Daniel Carlson converted a 28-yard field goal with 3:37 to play, after their offense, which struggled all season in the red zone, stalled at the 10. When quarterback Joe Burrow and Cincinnati’s offense returned to the field, they went three-and-out and took only 90 seconds off the clock, though Las Vegas was forced to use its last timeout.

Carr got another chance, and the Raiders quickly reached the Cincinnati 35-yard line with 1:44 to play thanks to a 15-yard completion to Josh Jacobs and an iffy roughing the passer penalty on the play. Las Vegas later converted a third-and-long to get inside the 10 with less than 30 seconds left. It was very possible the Raiders would rally, especially for a team that gutted out so many close wins during the regular season.

Considering how long the Bengals and their fans had waited, it may have been too much to ask to advance to the AFC’s divisional round easily. But Cincinnati pulled it out all the same.

Burrow was the cool customer we’ve quickly come to expect in his first professional postseason game, the Bengals’ first trip to the playoffs since the 2015 season. The regular season leader in completion percentage at 70.4 percent, he just about hit that number exactly against the Raiders by going 24-for-34 for 244 yards, two touchdowns and no interceptions. Not surprisingly, the Bengals’ first-round draft pick in 2021, Burrow’s former LSU teammate Ja’Marr Chase, was his top target.

Burrow has quickly become a beloved figure, who seems to move seamlessly through the many personalities of the locker room, fond of victory cigars when his teams clinch titles, and a leader who never seems rattled. He said after the game, however, that there would be no cigar Saturday night — “We expected this, so there isn’t going to be a big celebration,” he told NBC.

When you’ve watched a franchise suffer through 30 years of disappointment, it’s easy to feel like it’s doomed to mediocrity, especially for those outside of that fan base. Pundits wait for the Bengals, like they do the Browns and the Lions and Washington, to trip up or do something dumb and then shrug because it’s what’s expected.

But as someone who is old enough to have watched the 1985 New England Patriots, who finally overcame the rival Dolphins in the playoffs (“Squish the Fish” was the cheesy rallying cry) only to be humiliated by the Chicago Bears in Super Bowl XX and enter years of general malaise afterward, I also know that it can all change.

The right quarterback, the right coach, they can change the stars of a franchise. Bill Parcells and Drew Bledsoe got New England back to the Super Bowl, only to have the Patriots soundly defeated again. A handful of years later, Bill Belichick and Tom Brady got a long-mediocre franchise the championship it had never experienced.

Marvin Lewis and Andy Dalton got the Bengals to the tournament several times, but they could never get the team to the divisional round. Burrow and Zac Taylor, the head coach whose seat was getting warm at this time last year, have taken the step they couldn’t.

Maybe there isn’t a Super Bowl appearance this year, but with the AFC so unpredictable, maybe there is.

That’s for the coming weeks.

For Saturday night, there were finally celebrations — and texts.