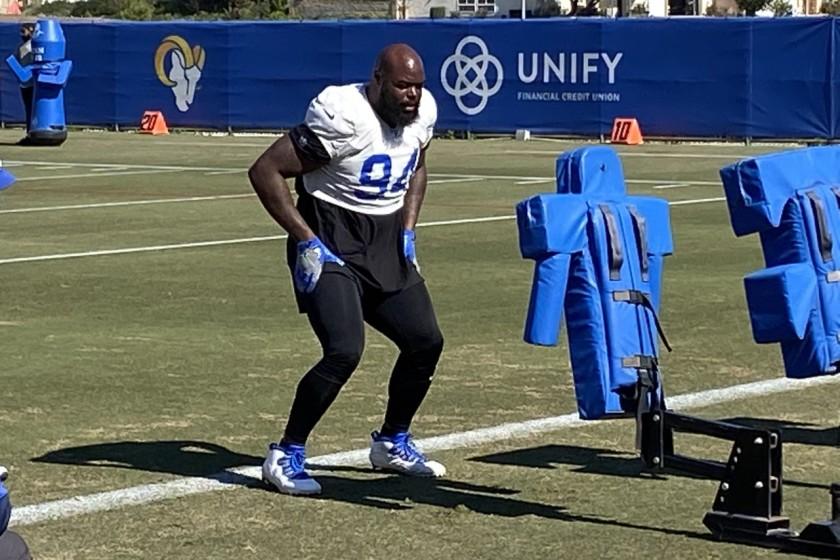 As the Rams prepare for the NFL draft, The Times will examine their roster. Part 4 of 8: the defensive line.

Any line that boasts a three-time NFL defensive player of the year is going to be formidable. It is a simple formula: Rams tackle Aaron Donald makes every player around him better.

Donald, 29, amassed 13½ sacks last season and joined Lawrence Taylor and J.J. Watt as the only players in history to win the defensive player of the year award three times. Donald, an eighth-year pro, has 85½ sacks.

But the Rams’ line will be challenged to duplicate its 2020 success.

The trade of Michael Brockers to the Detroit Lions and Morgan Fox’s free-agent departure to the Carolina Panthers leaves the Rams with holes to fill as they attempt to repeat as one of the NFL’s top defenses.

Before last season, the Rams signed veteran A’Shawn Robinson, ostensibly to replace Brockers, who signed a free-agent deal with the Baltimore Ravens that ultimately went awry. Robinson sat out training camp and the first eight games of the season because of what he described as a “respiratory situation” but returned to play a rotational role.

Sebastian Joseph-Day has established himself as a dependable nose tackle, and Greg Gaines was a productive rotational player last season.

Beyond those players, the Rams have no proven depth. Without a No. 1 draft pick for the fifth year in a row, the Rams will be mining the draft for linemen in lower rounds.

They have done it before.

Joseph-Day was a sixth-round pick in 2018. Gaines was drafted in the fourth round in 2019.

Free agents: Morgan Fox, who had six sacks last season, signed a two-year contract with the Carolina Panthers that included $5 million in guarantees.

Draft: The Rams need depth for this season and must look toward the future. So, they will be in search of interior defensive linemen and edge rushers.

Roster decisions: Robinson and Joseph-Day are in the final year of their contracts.