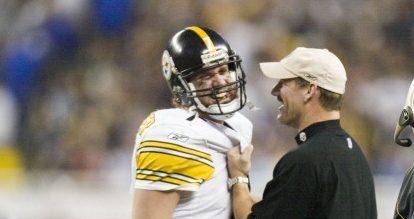 Ben Roethlisberger has won 156 regular-season games and 13 playoff games, including two Super Bowls. Thirty-four of those victories, and one of the Super Bowls, came with Bill Cowher as his coach.

Even though the quarterback is 39, Cowher doesn’t expect anything less from Roethlisberger and the Steelers this season.

“Consistently, year in and year out, he is a great competitor,” Cowher said Tuesday, via Nate Davis of USA Today. “I’m sure he’s just thriving right now on the fact that everyone thinks that he’s done, (that) the Steelers are done.

“I used to always say to people, ‘The greatest thing in sports is to do something nobody thinks you can do.’ And I think right now, Ben is just thriving on that, and he can’t wait to get out there – probably champing at the bit to prove (it). I would be very surprised if he didn’t have a great year this year.”

The Steelers drafted Roethlisberger with the 11th overall choice in 2004, and Cowher admits he thought Eli Manning and Philip Rivers were more NFL-ready than Roethlisberger was. But injuries to Tommy Maddox and Charlie Batch sped up the Steelers’ timetable for Roethlisberger, who entered the starting lineup in Week 3.

The Steelers went 13-0 in the regular season and 1-1 in the postseason with Roethlisberger as their starter in 2004, losing in the AFC Championship Game to the Patriots.

“He went from managing the game to winning games, and I was just amazed at – not just with his athleticism and his size, but his feel for the game,” Cowher said. “He could see the field better than anybody. He got comfortable outside the pocket. Not afraid to make throws. It was never too big for him.”