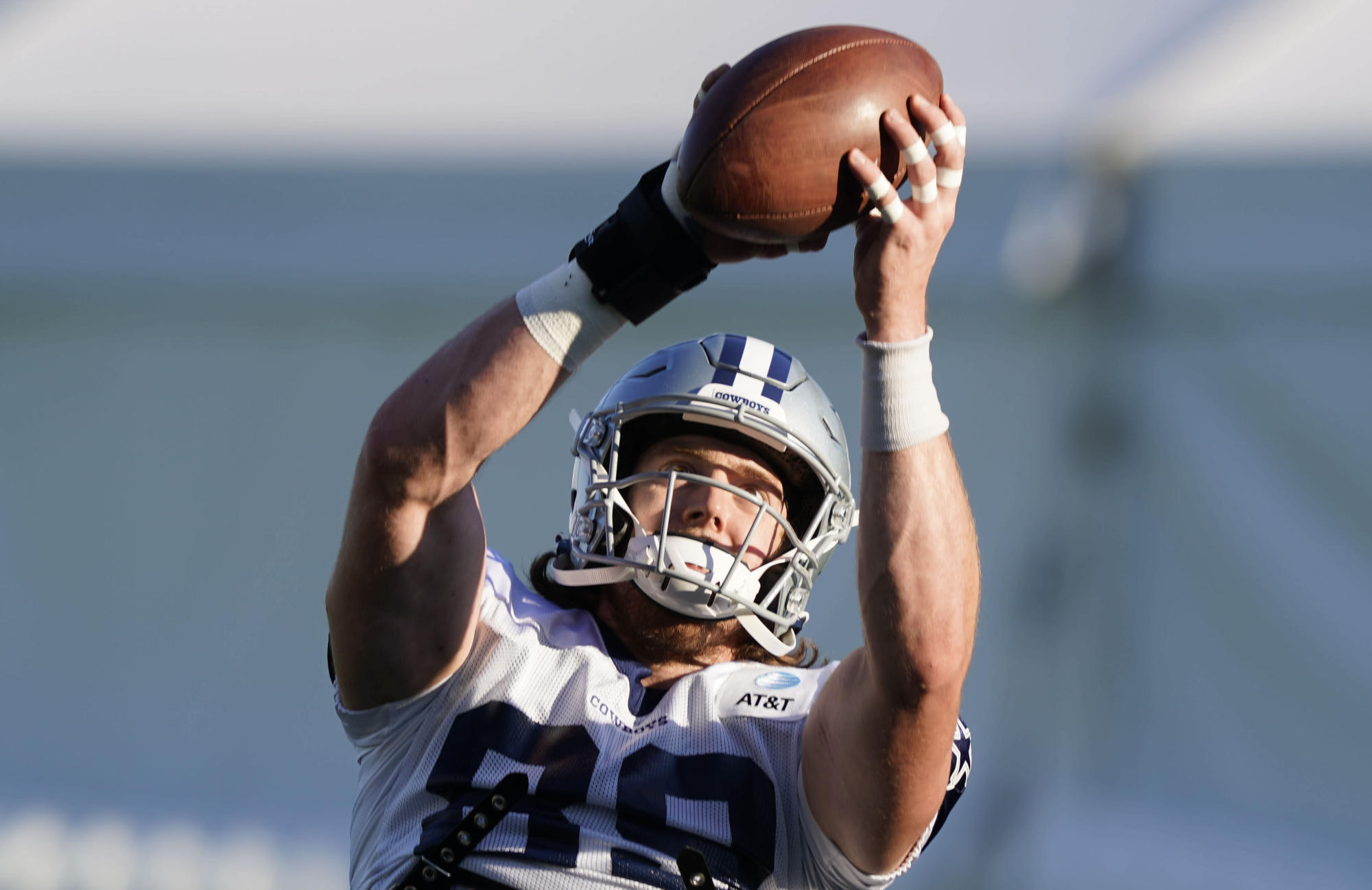 Dallas Cowboys fans had high levels of excitement about Blake Jarwin going into the 2020 season. Not only had Jason Witten moved on to the Las Vegas Raiders, opening up starter snaps at tight end, but offensive coordinator Kellen Moore was sure to utilize Jarwin’s skillset better than Jason Garrett ever could.

Unfortunately, Jarwin had just one catch and never made it out of the first half of the first game of the season. An ACL tear ended his season and added another victim to a long list of Cowboys injuries that derailed 2020.

Jarwin is the next player up in our continuing series, profiling the 2021 Dallas Cowboys.

Jarwin is a prototype for the modern-day NFL tight end, a physical specimen who has all the matchup size for winning receiving battles. He ran in the 86th percentile in the ten-yard split at 1.58 seconds and he had a broad jump in the 84th percent as well. The Cowboys were not only able to steal him as a undrafted free agent, but got him to the practice squad after the cutdown to 53. Jarwin had so much raw talent though the team had to soon keep four TEs on the active roster just to keep the likes of the New England Patriots and Philadelphia Eagles from poaching him from the practice squad. The Cowboys have developed, and now paid, Jarwin and his size, speed, and explosiveness. In an offense that already has Amari Cooper, Michael Gallup, CeeDee Lamb, and Ezekiel Elliot, it could be a nightmare for opposing defenses. To this point though, the team hasn’t seen it except a few flashes so far in his four years in the league. Dalton Schultz put up numbers comparable to NFC Pro Bowl TE, Evan Engram while replacing Jarwin in 2020, so while the contract might say Jarwin is the starter, overall production says Schultz could be the guy also. Jarwin will be ready to fight for snaps, but what makes most insiders and fans believe Jarwin will be the guy? The projecting of his limited numbers out when including snap count increases looks so promising. Schultz had a solid year, but diving into the numbers of both guys Jarwin has a better catch percentage, better yards per target and better yards per reception. Jarwin has put up a long of over 40 yards, while Schultz has never eclipsed 30. Going back to 2018 Jarwin started versus the New York Giants and he and Dak Prescott connected on seven of eight targets for 119 yards and three TDs. Jarwin’s potential showed up that night and if he and Dak can do that once, it is believed they can do it again. The coaching staff will need to see how the ACL tear has impacted Jarwin’s on-field ability. If he has lost explosiveness does it make sense to play him ahead of Schultz, who was competent as a receiving option while also being a much better blocker than Jarwin has shown so far in his career. The competition is no problem for Jarwin, who is looking to come in and compete and hopes he and Schultz can push each other to greater heights. “I’m excited to get back out there and compete with him(Schultz.) I think it’s going to be great for the both of us, and I think both of us on the field at the same time will be awesome, as well,” Jarwin says.

You can find Mike Crum on Twitter @cdpiglet or at Youtube on the About the Cowboys Podcast. This profile is part of our countdown series to the regular season. For the full 90-man roster, go here.