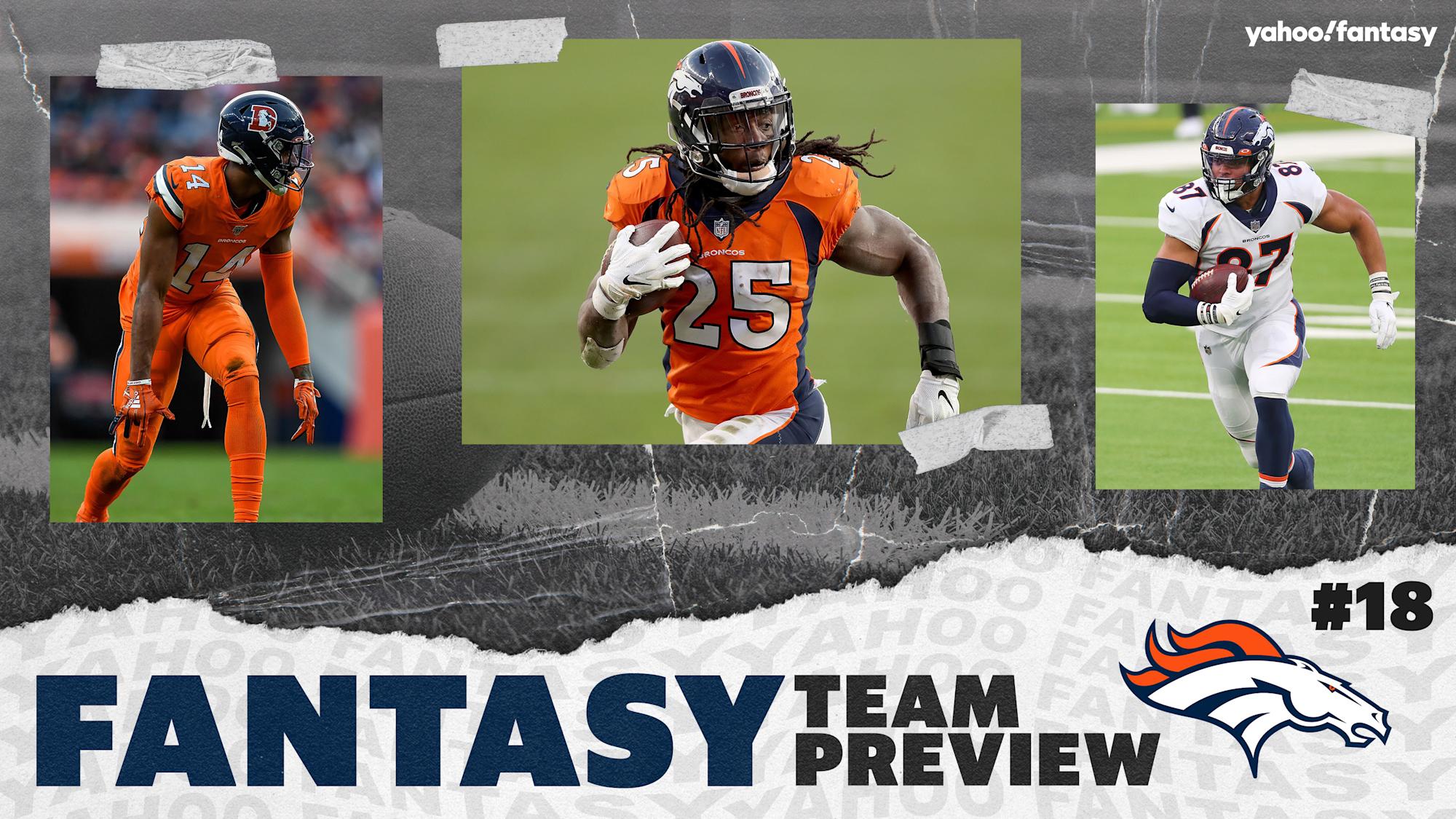 We’re previewing every NFL team to get you ready for the 2021 season. Our analysts will tackle pressing fantasy questions and team win totals, in order from the squad with the least amount of fantasy relevancy all the way to the most talented team. Next up, the 18th-ranked Denver Broncos.

1. The Broncos have some of the best weapons on offense of any team in the NFL, especially at the wide receiver position. Who is your top ADP target on this team, and why?

Liz: Prior to 2020, Cortland Sutton hadn’t missed time due to injury since his true freshman season (2014) at SMU. The chaos created by last year’s abbreviated offseason likely contributed to the ACL tear he suffered in Week 2. Current reports suggest, however, that he’ll be fully cleared in time for training camp and will promptly resume his role as the team’s alpha receiver.

In 2019, with a true collection of bodies under center, Sutton broke out with a 72-1,112-6 stat line. Top-10 in total air yards (1,560) the contested catch specialist was the WR20 overall in fantasy. This go-around, his upside figures to be capped by the talent under center, a low-volume passing offense (bottom-15 in 2020), and loaded receiving corps. Still, Sutton’s experience and red-zone prowess make him a savvy buy after the top-30ish WRs are off the board.

Andy: First of all, it’s OK to like all these guys at their ADPs, none of which seem too aggressive. We don’t have to pick just one player from this loaded receiving corps. But for me, the name with the greatest possible upside here is Courtland Sutton. He’s the 6-foot-4 contested-catch winner who already has a 1,100-yard season to his credit. It’s difficult for me to believe he won’t someday produce a year with double-digit TDs, perhaps in 2021. If he’s gonna slip to the WR3 range, I’m in.

Scott: It’s common for a tight end to really put things together in season three. Although the Drew Lock experience makes my eyes bleed, I expect Noah Fant to spike in 2021, no matter how spotty the quarterback play is. As Behrens will gladly tell you, Iowa has become a hotbed of superstar tight ends.

2. Just when we thought Melvin Gordon was going to have the Denver backfield to himself, they went and drafted Javonte Williams. Are you still in on Gordon or is this a backfield headache waiting to happen?

Andy: Let’s hope Gordon doesn’t slip so far that he becomes a gift to ZeroRB drafters. He’s still the presumptive head of this team’s rushing committee, at least for now. Last year, he dominated Denver’s backfield targets and carries near the end zone, handling 18 attempts inside the 10-yard line. We like those things. Gordon didn’t have the rushing workload entirely to himself last year, yet he still delivered 1,144 scrimmage yards and 10 TDs, averaging 4.6 YPC. He can still help the fantasy community.

Williams is a serious talent ticketed for a significant future role, but, realistically, he’s probably looking at 8-12 touches per week. We shouldn’t assume he’s a lock to be this year’s Cam Akers, assuming Gordon remains healthy.

Scott: Count me out on Gordon. The Broncos prioritized Williams in the draft, the club went after Mike Boone, and the current admin is not the group that acquired Gordon in the first place. I will consider Williams if the draft price is reasonable, and Boone is worth a late-round flier in best-ball formats. Unless Gordon’s ADP sinks like a stone, he won’t be on my rosters.

Liz: Moving up five spots in the second round clearly indicates that Williams is the Broncos back of the future. A tackle-breaking machine with outstanding contact balance, the North Carolina product was a consensus top-3 RB among NFL scouts and draftniks.

But Gordon was the RB12 overall (15 games) in fantasy last year, recording over 1,100 scrimmage yards and 10 total TDs in 2020. Entering the last year of his deal, the Broncos would be wise to lean on Gordon while easing the rookie into the pro game. Last year, in games in which he shared the backfield with Phillip Lindsay, Gordon averaged 12.3 carries per contest. In 2021, 12-14 carries per game make sense. Noting his improved efficiency (4.6 YPC) and red zone opportunities (2.0 rz touches/gm), Gordon is a solid RB3 target.

3. Noah Fant finished as the TE12 in 2020 but is ranked 7th among this year’s group. Does he overcome Denver’s QB questions to take a step forward or remain a low-end starter?

Scott: Maybe I wasn’t supposed to answer Fant in the first question, but I couldn’t help it. He checks all the boxes: physical gifts, route running, competitiveness, career arc. He will be a common target for me this summer.

Liz: Fant is a fascinating study. He’s an athletic marvel (95th percentile SPARQ) who’s regularly plagued by drops (four in back-to-back seasons). I’ll give the Iowa product a pass on last year’s effort, as he played hurt for most of the year. It’s worth noting that two of his three TDs came ahead of the Week 4 ankle sprain and that his involvement/production markedly increased over the last three weeks of the season. I don’t ever envision Fant growing into a consistent player, but he’ll post ceiling games. If volatility is your game, then he’s your guy. I have him ranked just inside my top-10 players at the position.

Andy: It’s pretty much impossible to separate this team’s big orange question mark at QB from the outlook of the individual receivers. But Fant is among the smoothest and most athletically gifted tight ends in the league, he’s only missed one game over two pro seasons (despite battling injuries) and he was a red-zone dominator in college. He has the profile of a potential star. Fant is the sort of player you should reach for at every opportunity in fantasy drafts because his potential ceiling is at or near the top of his position.

Scott: Vic Fangio might be a Peter Principle head coach; you loved him as a coordinator, but he’s overmatched in the big chair. The Broncos have the worst quarterback situation in the division, and the defense is no longer a major needle-mover. I can only punch the UNDER side of this ticket.