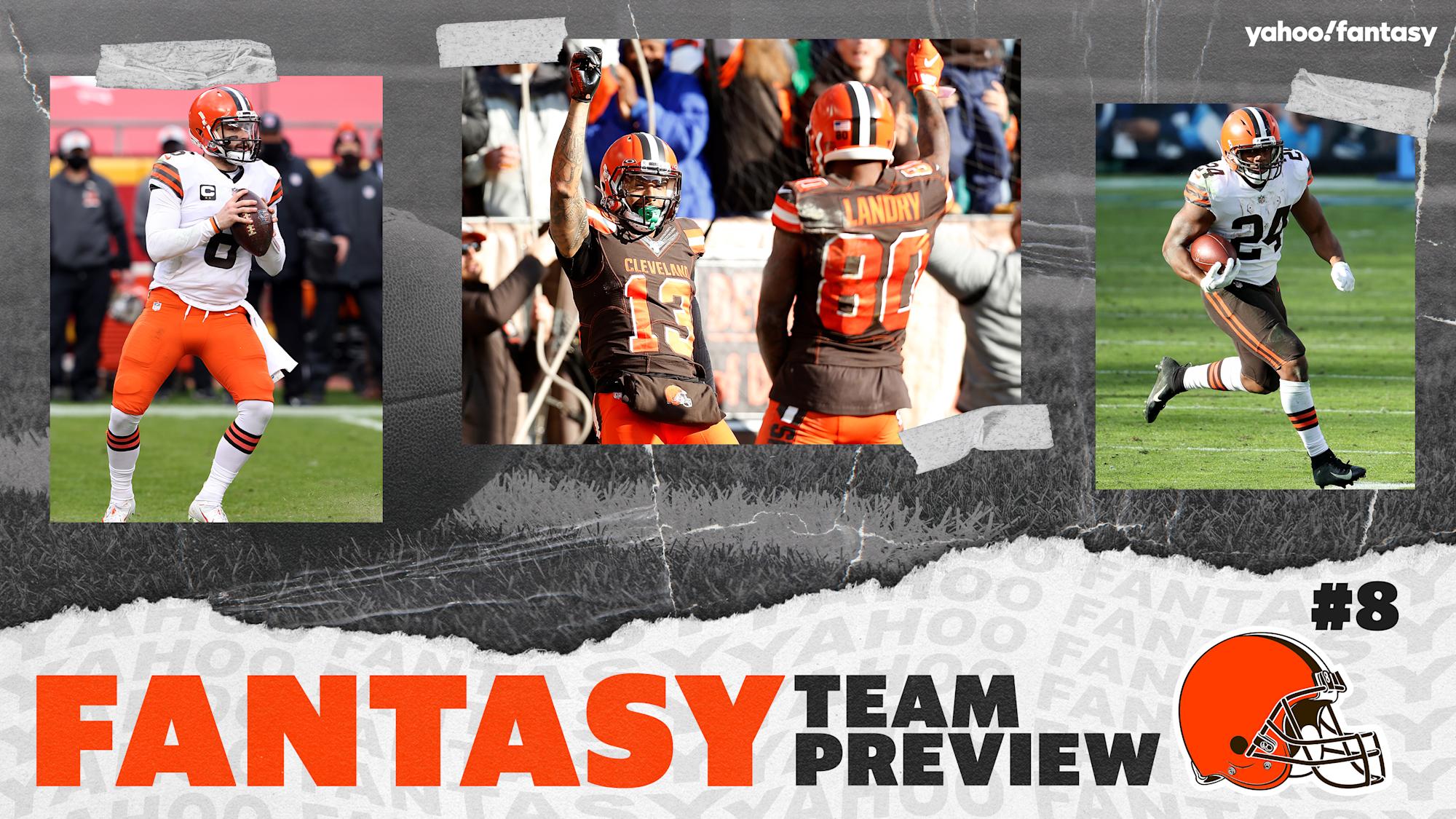 We’re previewing every NFL team to get you ready for the 2021 season. Our analysts will tackle pressing fantasy questions and team win totals, in order from the squad with the least amount of fantasy relevancy all the way to the most talented team. Next up, the 8th-ranked Cleveland Browns.

1. If you’ve watched any Nick Chubb highlights, you know he’s one of the best pure runners in the game. That said, Kareem Hunt remains in this potent backfield, and Chubb is our 8th-ranked RB for 2021. Is it more likely Chubb delivers a top-five finish this season, or falls outside the top-10 rushers?

Matt: More likely to be a top-five player at the position. Nick Chubb checks the three major boxes you want out of a possible elite RB1. He is verifiably great at the game. The Browns are set to be one of the best offenses in the NFL with Kevin Stefanski at the controls. And lastly, Chubb gets a beefy workload — averaging 17 touches per game in 2020. Not to mention, everyone talks about the injury upside for Kareem Hunt if Chubb were to go down. The same ceiling exists for Chubb if Hunt misses time. In that scenario, he might just be the most valuable back in fantasy.

Andy: Considering the setup in Cleveland — particularly the offensive approach and O-line — all we really need from Chubb is a healthy season and he’s clearly going to challenge for a top-5 finish. He’s averaged 106.8 yards from scrimmage over the past two years and he’s coming off a season in which he gained 5.9 yards per touch. Chubb is simply a monster. It’s not unrealistic to expect 1,800 total yards and another dozen (or more) TDs, assuming he plays at least 15 games.

Dalton: Chubb has an argument as the league’s best runner coming off a season in which he led the NFL in Juke Rate, EPA and yards created per touch despite spraining his MCL. The Browns have PFF’s best offensive line entering 2021 and one of the easiest projected fantasy schedules for running backs. Chubb would benefit from more targets, but there’s a better chance he’s a top-five back than outside the top-10. There’s a clear path to finishing as the No. 1 fantasy back should Hunt go down.

2. Staying with the ground game, Hunt is inside our top-25 RBs, but he’s ranked with other runners who are expected to lead their respective backfields. If the likes of Josh Jacobs, Myles Gaskin, Mike Davis, and Chase Edmonds are available along with Hunt, which way are you going?

Andy: All of the running backs mentioned in this question are, at some level and for some reason, a little terrifying. Hunt should again reliably see a dozen or more touches per game with 50-plus targets and a decent helping of goal-to-go opportunities. However, his best path to massive statistical season involves an injury to Chubb, which I am not prepared to contemplate. With Hunt, at least we don’t have to speculate about his 2021 usage, nor do we have to worry about his ability to handle a significant workload (think 240-ish touches). I wouldn’t roll my eyes if you want to take one of these same-tier backs over Hunt, but I’ve got Kareem atop this group. I fully reject the take incoming from Dalton…

Dalton: I have all of the above ranked ahead of Hunt, who won’t end up on many of my fantasy teams as part of the “RB dead zone.” There’s real upside should Chubb go down, but Hunt is barely flex worthy otherwise. Cleveland is a good situation being well-coached and loaded at offensive line, but it will take a Chubb injury for Hunt to be worth his ADP. I’d rather gamble on Trey Sermon.

Matt: It really depends on the construction of the team. I’m probably only interested in some of those veterans with a hold, albeit a shaky one, on their backfield if I’m in need of filling an RB2 spot after hitting other starting positions in Rounds 1-4. Hunt has a really appealing combination of weekly usability and theoretical ceiling in the event Chubb misses time. Honestly, I’m probably not taking any of these guys and would prefer to hit other positions in this range of my draft and take care of running back earlier.

3. Is it too easy to see Odell Beckham Jr.’s injury history and apparent chemistry struggles with Baker Mayfield and pass on him? Or are we now to the point where OBJ has fallen so far (ranked WR26 for 2021) where he could be a draft value?

Dalton: Beckham looked like a Hall of Fame lock at one point, so he should be considered a value now, especially still just 28 years old. OBJ remains one of the league’s bigger injury risks, but there’s not much competition for targets from a QB who got 7.8 YPA with an 11:1 TD:INT ratio over last year’s second half after becoming more comfortable in Kevin Stefanski’s offense. I’m betting on a Beckham bounce back.

Matt: He’s a value at this point. Beckham played much better than folks think as an individual player during his time with Cleveland in 2020. Had he stuck around, he would have reaped the same benefits all other Browns passing game players did as they got comfortable in the new offense. I don’t buy the narrative one bit that Mayfield and the Browns offense are better without him. That’s just a matter of coincidence. The Browns offense can take another leap with a star player like him in the mix. He might not ever get back to the Hall of Fame-worthy play we saw early in his career — there have been too many injuries at this point. However, I’ll always believe in a path back to redemption for Beckham until there’s just zero hope left.

Andy: Even if you don’t fully believe in Beckham’s ability to bounce back to fantasy stardom, you can’t hate this draft price. He’s cleared 1,000 receiving yards in every season in which he’s appeared in at least 12 games. There’s still rapport to be developed between OBJ and Baker Mayfield, clearly, and every Cleveland receiver is going to produce a bunch of quiet weeks. But, again, it’s not as if we’re drafting Beckham ahead of a bunch of no-doubt 1,300-yard wideouts. To me, he’s not an unreasonable flier if he’s falling outside the top-25 receivers.

Dalton: OVER. I don’t love Cleveland entering the season with a good amount of hype, but the high expectations are warranted with a loaded roster and terrific coaching staff. It won’t be easy in a strong AFC North, but Mayfield showed real improvement last season. The Browns also project to have one of the league’s easiest schedules.