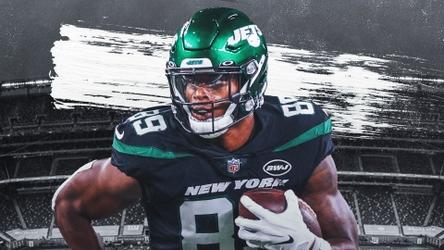 We’ll highlight those players for the Jets, starting with TE Chris Herndon…

After a promising rookie season, Herndon was expected to become one of Sam Darnold’s favorite targets and a key contributor over the next several years. However, he missed nearly all of the 2019 season and then struggled through an error-prone third season in 2020.

The new offensive staff came from an offense which George Kittle established himself as one of the league’s best tight ends, so the Jets will be relying on their tight ends to produce. However, they have a couple of other options to turn to if Herndon doesn’t flourish in the new system.

If he doesn’t produce in 2021, it will probably be best for both Herndon and the team if he moves on and gets a change of scenery elsewhere.

Herndon overcame the durability concerns he faced heading into the 2020 season by playing all 16 games, having missed 14 of 16 in 2019. However, his consistency let him down badly and that’s the main thing he’ll need to overcome in 2021.

Early in the fourth quarter on opening day, the Jets were down by just 11 to the Bills and had driven up to near midfield as they looked to make it a one-possession game. However, Herndon’s fumble helped the Bills put the game out of reach and led to the Jets spiraling into an 13-game losing streak. As the season progressed, Herndon dropped several passes, including a couple of easy ones at key moments. He also lost another costly fumble.

Eventually, the coaching staff seemed to lose confidence in Herndon, and he ended up being used almost exclusively as a blocker. After dropping a pass against Arizona in Week 5, the Jets threw to him just five times over the next eight games. If Herndon can’t earn the confidence of his new quarterback and coaching staff, he’ll once again find himself becoming an afterthought over the course of this season.

The Jets brought in Tyler Kroft during the offseason and undrafted free agent Kenny Yeboah is considered to have potential, so Herndon will soon fall down the depth chart if he falters.

However, Kroft is viewed as more of a blocker and Yeboah had issues with drops during offseason practices, so Herndon should get the first shot at being a featured part of the passing game.

There is perhaps some cause for optimism based on how Herndon played down the stretch. 14 of his 31 receptions came in the last three games of the year as he had several impressive plays, including a key touchdown in the win over the Browns.

If Herndon can carry that momentum into his first season with the new coaching staff, he could feature more heavily in the offensive gameplans with Zach Wilson at the helm. The Jets will hope that the new staff will give him the fresh start he needs, without him having to move to another team.

One area where Herndon has unquestionably improved is in terms of his blocking. He has become more consistent as a run blocker and actually led all NFL non-linemen in pass protection snaps last year. If he can rediscover the pass catching potential he displayed when he led all rookie tight ends in receptions back in 2018, then he could be a versatile weapon for this team and improve.