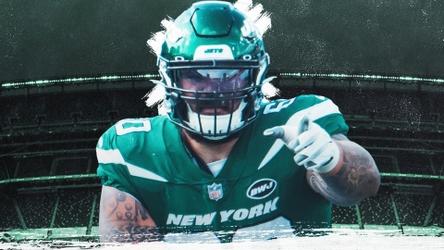 We’ll highlight those players for the Jets, starting with C Connor McGovern…

McGovern signed a three-year deal last season, and his 2021 salary is fully guaranteed. However, he’s due to earn $9 million in 2022, none of which is guaranteed, so if he doesn’t live up to his salary this season, the team is likely to look for an upgrade or a cheaper replacement with more upside.

The recent upgrades made along the offensive line have intensified the scrutiny on McGovern with fans and analysts viewing the center position as somewhere the Jets should be focused on improving.

However, after a shaky start, McGovern quietly played much better in the second half of last season. Could he actually thrive in the new system and with these exciting additions either side of him?

As always, one of the main keys to McGovern’s success in 2021 will be that he remains healthy. Although he started every game last season, McGovern was dealing with a hamstring issue for most of the year, which saw him knocked out of a few games. He toughed it out a couple of times, but it seemed to affect his play.

While injury concerns could affect McGovern’s own performance, injuries to his linemates could also put pressure on him. The longer it takes for the starting unit to gel, the harder it will be for McGovern to avoid mistakes. The coaches may also have to put more on his plate if he has backups playing alongside him, although they will hope the depth they added in the offseason should make this unnecessary.

The two main issues McGovern had last season were bad snaps and allowing too much interior pressure. The snaps issue seemed to clear up over the second half of the season, but interior pressure was a constant issue. While McGovern was responsible for some of this, it’s not always easy to apportion the blame accurately. There would have been other contributing factors, including missed assignments by one of the guards – especially when the starters were out – or issues with the quarterback being too slow to get rid of the ball or anticipate the pressure. The Jets will collectively need to address this injury better in 2021, otherwise McGovern will again face criticism.

As a run blocker, McGovern was much more reliable, especially as the line started to gel over the second half of the season. After the first six games, McGovern graded out as one of the top five run blocking centers in the league according to Pro Football Focus and if he can play like that all year, then the running game should give the Jets a strong offensive foundation.

The Jets are optimistic that drafting Alijah Vera-Tucker will shore up the left guard position and this should hopefully help to limit the amount of interior pressure Zach Wilson has to deal with in 2021. However, Wilson could also contribute to this by being decisive and showcasing his heralded quick release.

The new offensive system is another reason for optimism that a healthy McGovern will play at a much more consistent level in 2021. In the running game, McGovern is most effective on zone blocking assignments and there should be even more of these than last season now that the Jets have brought John Benton in from San Francisco to be their offensive line coach. The expected increase in outside zone runs should enable McGovern to showcase his athleticism to climb to the second level or make reach blocks on defensive linemen.

There was a sign of things to come in December’s game against the Raiders, as the Jets rushed for over 200 yards and almost pulled off an upset win. McGovern was a standout performer in that game as the Jets relied heavily on the kind of outside runs that are expected to be a staple of Benton’s scheme.