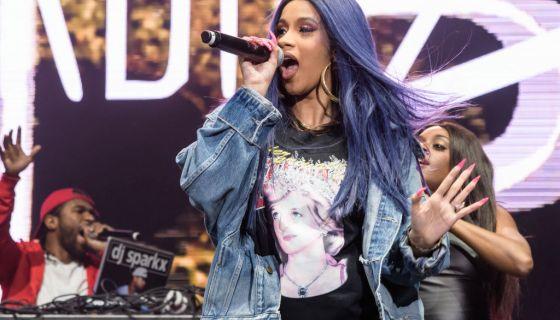 Cardi B is known for oozing sex appeal. From her raunchy lyrics to her risqué style, the Bronx rapstress has never had an issue tapping into her sexy side. But while filming the “Wild Side” video with singer Normani, she said it was hard to do it because she’s pregnant.

” I felt so out of place trying to be sexy and rapping about d**** and c****” she told Cosmopolitan. “My body wasn’t feeling sexy and it was the first time in public where I was butt naked with a big a** belly. But Normani’s a natural dancer, so she was like, ‘Yeah, Cardi go like this, POW!’”

The “Up” rapper said due to baby bump, being nude was the best option because she couldn’t wear any sexy outfits.

“I’ve done so much nudeness in my videos before,” she added. “That was the only thing that made sense around that time because no clothes were fitting me nicely. I was around five and a half months pregnant, going into six months pregnant, so I couldn’t wear a bustier or waist trainer.”

Cardi said Normani was a huge support for her while filming the video. She said she “made sure that the set was very private ’cause nobody knew that she was pregnant” and was giving her “advice on how to look more fierce.”

The soon-to-be mother of two revealed she was pregnant back in June while performing “Type S***” with the Migos. Once she gives birth, she is looking forward to releasing her sophomore album but wants to pace herself so she can bond with her baby and also give her album the proper rollout.