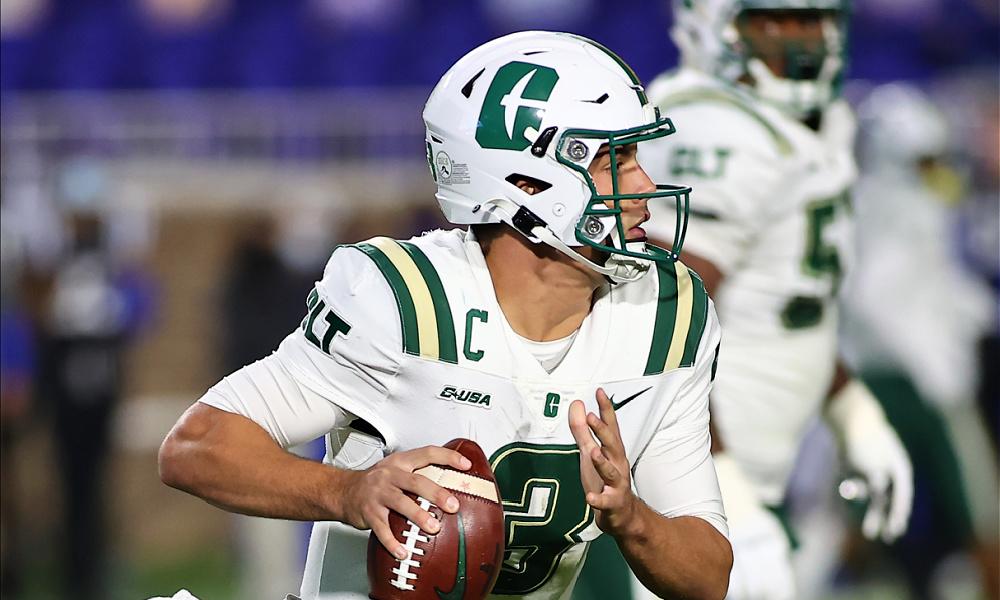 College Football News Preview 2021: Previewing, predicting, and looking ahead to the Charlotte season with what you need to know.

– The 49ers get cut a little slack considering the program was hammered by Covid issues. It managed to do a great job of controlling the clock and the tempo, and it averaged a solid 378 yards per game with a decent downfield passing attack. When they scored more than 20 points, they won. When they didn’t, they lost.

On the positive side in a lemonade-out-of-lemons way, a whole lot of players saw meaningful time and rose up into their jobs. Ten starters are expected to return with the spotlight on …

– Chris Reynolds should be the starting quarterback, but he’s about to get pushed. He’s just a 5-11, 190ish pound baller, but he’s able to move the offense. He threw eight touchdown passes with just two picks in the six games, but in comes James Foster from Texas A&M to battle for the starting gig. Reynolds is the reliable veteran leader, but Foster might be the shot for the stars.

The receiving corps is going to be fantastic with the big play ability of Victor Tucker leading a loaded group. There’s not a ton of size, but the top four pass catchers are back including TE Taylor Thompson.

– Losing top two rushers Tre Harbison and Aaron McAllister doesn’t help, and now it’ll be a rotation for a while to find the main man. Shadrick Byrd comes in from Iowa, and Calvin Camp is a speedster with big play ability.

Four starters return on a line that was good for the running game but struggled at keeping defenses out of the backfield. Losing OT Ty’kiest Crawford to Arkansas and center Jaelin Fisher isn’t a plus, but there are enough decent parts back to be okay. It won’t be a killer line, but the starting five will be fine as long as there isn’t a rash of injuries.

– What You Need To Know: Defense
– Top Players | Keys To The Season
– What Will Happen, Win Total Prediction
– Charlotte Schedule Analysis

– The 49ers went deep into the transfer portal to get a slew of options for the line. The star of last year’s front four, though – Timmy Horne – is gone to Kansas State, and end Tyriq Harris is done.

However, Notre Dame’s Kofi Wardlow brings help for the outside and Iowa State’s Joshua Bailey will add bulk to the interior. Markees Watts led the team with two sacks and Mikel Horton is a big body for the interior, but this will be a work in progress.

– Ben DeLuca was a heart-and-soul safety talent who won’t be easily replaced, but Antone Williams is a veteran for one of the jobs and Lance McMillan is a battler at one corner gig. Like the line, the secondary is getting help from the transfer portal, but it’s going to be a young and relatively inexperienced group overall.

– LB Tyler Murray is a big safety-sized linebacker who led the team with 49 tackles, and Luke Martin is a good run stopper on the inside. There’s not any size in the corps, but it’s potentially one of the team’s biggest strengths if junior Jaylon Sharpe has a big year on the outside and Troy transfer Justin Whisenhunt can be an instant factor.

– What You Need To Know: Offense
– Top Players | Keys To The Season
– What Will Happen, Win Total Prediction
– Charlotte Schedule Analysis

WR Victor Tucker, Sr.
The team’s best receiver over the last two seasons, the 5-11, 177-pounder from Miami followed up a 52-catch sophomore season – averaging well over 17 yards per grab – with a strong six game run in 2020.

There were plenty of good targets, but Tucker still stood out with 30 catches for 400 yards and two scores, hitting WKU for 111 yards and Florida Atlantic for 118 in the all-star campaign.

LB Tyler Murray, Sr.
The 6-2, 215-pounder came over from an All-Sun Belt run at Troy and turned into Charlotte’s top tackler. He’s not all that big, but he gets all over the field coming up with 49 tackles, two picks, and two tackles for loss.

He might not bring a ton of thump, but he’s a solid volume tackler who seems to get in on everything. Watch out for him to be turned loose more into the backfield.

QB James Foster, Soph.
Yeah, yeah, yeah, Chris Reynolds is the baller of a college quarterback who was able to fight through to earn the trust of the coaching staff and do a whole lot of good things for the 49er offense over the last few years, but Foster is a different type of playmaker.

He sat behind Kellen Mond over the last two years and didn’t even get a shot to play last season. Dangerous on the move and with the size and arm Reynolds doesn’t have, at the very least he’ll give the 49ers a terrific No. 2 option if he doesn’t take the O to another level.

– What You Need To Know: Offense | Defense
– Keys To The Season
– What Will Happen, Win Total Prediction
– Charlotte Schedule Analysis

NEXT: Charlotte 49ers College Football Preview 2021: Keys To The Season

The O line has to give everyone more time to work. Statistically the running game worked just fine, but that was all a tad skewed because of a big day against a North Texas D that gave up 200 rushing yards like Halloween candy.

Overall, the 49ers failed to average more than five yards per carry in five of the six games and were stuffed way too often. They still managed to control the clock and the tempo, and they ran for 11 touchdowns, but considering the downfield passing game won’t be an issue, running for at least 150 yards per game is a must.

The pressure has to come from somewhere. The 49er defense had a big problem holding up against the run, and it had an even bigger problem breathing on opposing quarterbacks.

It only managed five sacks in the six games, and two of those came in the win over North Texas. By comparison, the 2019 defense came up five sacks in the opener against Gardner-Webb and generated 36 for the year.

There weren’t enough big plays behind the line from the ends, the linebacking corps was busy trying to clean up everything the front four didn’t take care of, and there were way too many manageable third down opportunities.

It all tied into the problems with the run D. Charlotte gave up over 200 yards on the ground four times and lost all four games.

DT Mikel Horton, Sr.
The 6-1, 290-pound veteran started his career off at Wofford and turned into a nice playmaker behind the line and good tough guy for the interior. He got hurt, transferred to Charlotte, and he worked his way into a role last season making 11 sacks and a tackle for loss.

Now with Timmy Horne off being a Kansas State Wildcat, there’s little to no proven bulk on the inside. Horton might not be the size of the 318-pound Horne, but he has to hold up as a possible anchor against the run.

Middle Tennessee, Sept. 25
It’s not just the team’s Conference USA opener, but it’s one of the only home games for a long stretch. On the plus side, three of the first four games are in Charlotte. However, that overlaps with the start of a run of three road games in four weeks meaning there’s just one home date between September 18th to October 23rd.

The 49ers lost the first four games in the series before winning 34-20 in 2019. Winning is a really, really big deal with a relatively difficult second half of the season lurking.

When Charlotte got to seven wins and a bowl game in 2019, it helped that it played a whole slew of mediocre-to-awful teams to get to the Bahamas Bowl.

But so what? Charlotte just started doing this football thing in 2013, and then got into the Conference USA world in 2015. So there’s no reason to think that the 2-4 2020 season had much more to do with anything other than 1) a global pandemic and 2) better teams on the slate.

To be very, very respectful to the 2019 team, it managed to shock Marshall as the one strong win, but for the most part it lost to the teams it was supposed to.

And that’s what’s going to make this year so interesting in the third year under head coach Will Healy. There aren’t enough teams on the slate that the 49ers are going to be favored against, but there’s the talent and experience in place – at least on offense – to win some of the tougher games anyway.

Duke and at Illinois. Unless there’s a shocker, take those two out of the mix, but out of home games against Gardner-Webb, Middle Tennessee and Rice, going at least 2-1 isn’t asking for the world.

It’s possible to win a road game at Old Dominion, pull off a home victory over Florida Atlantic if everything goes right, and hope for a few more breaks to make this a decent year, but there are too many road blocks to make it a second bowl season in three seasons.

But Healy and this program have defied expectations before. There’s a good chance they get into mid-November with a shot to get to six wins …

But they’ll come up just short.

– What You Need To Know: Offense | Defense
– Top Players | Keys To The Season
– Charlotte Schedule Analysis