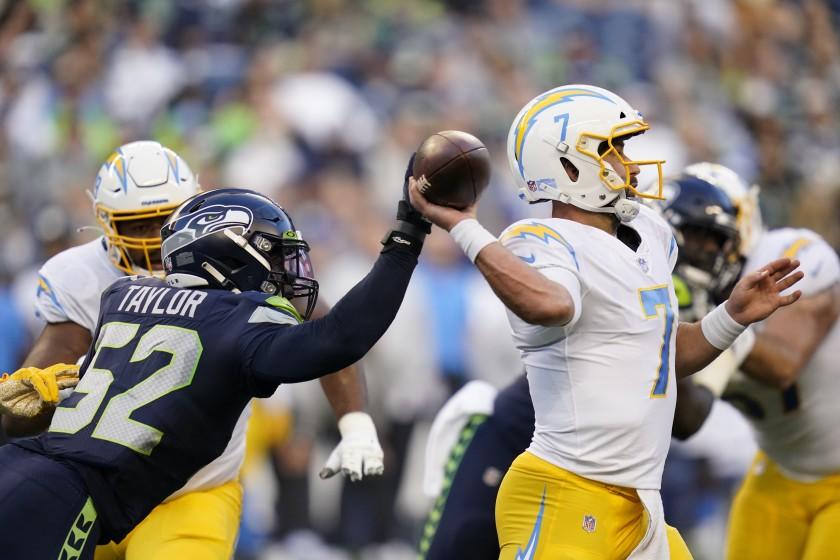 The closing arguments in the Chargers’ backup quarterback race nearly ended Saturday only minutes after beginning.

Chase Daniel, who is battling Easton Stick for the job as No. 2 to Justin Herbert, was injured on the opening series and had to leave the game.

The veteran was able to return after one possession and the competition resumed in the Chargers’ preseason finale — a 27-0 loss to the Seattle Seahawks.

Daniel remained in until the Chargers’ final first-half possession when Stick replaced him again.

That opening series could not have ended much worse for Daniel.

He was sacked by an untouched Cody Burton and fumbled with Seahawks safety Marquise Blair picking the ball out of the air and returning it 17 yards for a touchdown.

Burton blitzed through the middle and reached Daniel just as he was readying to throw.

Daniel left the field staring at his right hand and remained on the sideline after Seattle kicked off.

Stick entered and the offense went three and out when rookie wide receiver Josh Palmer dropped a pass that would have converted on third down.

Daniel, after making several warmup tosses to test out his hand, came back for the Chargers’ third series.

They managed to pick up two first downs — on completions of 10 yards to Stephen Anderson and 16 yards to Tyron Johnson — before punting again.

Within the last week, offensive coordinator Joe Lombardi said the key to being a backup quarterback in the NFL is the ability to remain game ready without receiving many reps.

This becomes even harder to do once the regular season begins and the starter takes almost all the practice snaps.

“A lot of it is visualization, staying after practice and walking through the script,” Lombardi said. “It’s really a mental game for those guys.”

Daniel, 34 and beginning his 13th year, has started just five NFL games and appeared in 64 others. He has backed up Drew Brees, Alex Smith, Carson Wentz, Mitch Trubisky and Matthew Stafford.

Daniel finished Saturday nine for 12 for 70 yards but clearly was experiencing discomfort in his right hand. His status is significant with teams having to cut their rosters to 53 players by 1 p.m. Tuesday.

Stick was a fifth-round pick in 2019, the Chargers taking him after he went 49-3 as a starter and won two national championships at North Dakota State. He was inactive during his rookie year before playing two snaps in 2020.

The first and second halves of preseason games can vary wildly based on the skill level of the players involved, with the more advanced players typically sitting out after halftime.

Given that difference, coach Brandon Staley said evaluating quarterbacks in the preseason is more nuanced and hardly driven by statistics.

“Even with our first offensive line in there, when you go against a really good front, you’re going to have pockets that are like that,” he said of the quarterback facing pressure. “So just your decision making. … Are you seeing the game the right way?”

Beyond the three preseason games, Staley also said he and his staff have had plenty of opportunities to measure Daniel and Stick.

“We’ve been practicing for about a month now,” he said. “And we have a lot of data tracking all these practices and feel like it’s gonna give us a full evaluation on these guys.”

The Chargers also entered Saturday with their kicking situation unsettled between Tristan Vizcaino and Michael Badgley.

Vizcaino had the only attempt of the game, missing a 47-yard field-goal attempt wide right in the first half.

Still, the job of the NFL kicker is such that his direct influence on the outcome of a game often is much greater than that math would suggest. In other words, the decision on kicker isn’t a minor one.