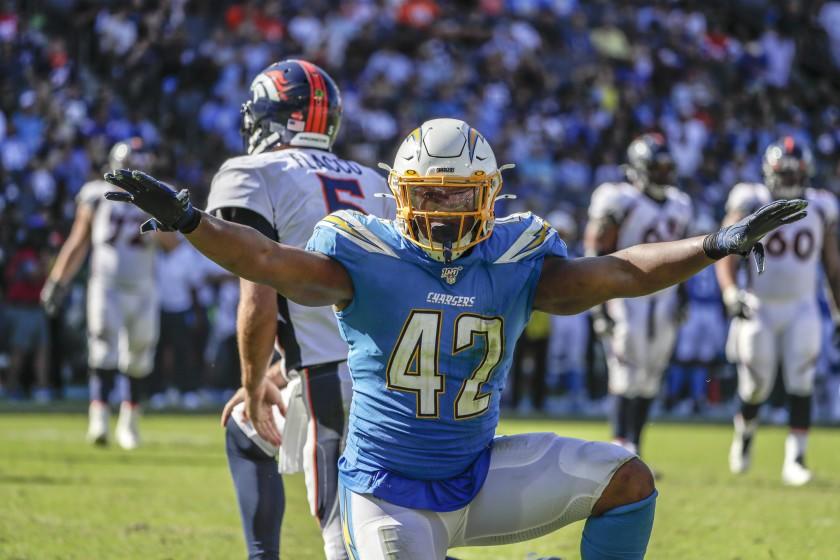 As the Chargers prepare for the NFL draft, The Times will examine their roster. Part 6 of 8: Linebackers.

During his senior year at USC, Uchenna Nwosu had 9.5 sacks, two other tackles for lost yardage, an interception, a fumble recovery and defended 13 passes.

The Chargers aren’t expecting that much from him this season, but they’re talking about Nwosu as if he’ll have plenty of chances to shine.

Entering his fourth NFL season, Nwosu has played about a third of the Chargers’ defensive snaps in his 45 career games.

With defensive end Melvin Ingram a free agent and not in the team plans, general manager Tom Telesco and coach Brandon Staley both have touted Nwosu as a capable replacement.

Under Staley, the Chargers will transition to more of a 3-4 look defensively, with Nwosu for now forecast to start on the edge opposite Joey Bosa.

A year ago in Staley’s scheme, Leonard Floyd became a force for the Rams, finishing with 10.5 sacks and 19 quarterback hits. In March, Floyd signed a four-year contract worth up to $64 million with $32.5 million guaranteed.

Nwosu is two inches shorter and 10 pounds heavier than Floyd. He also was a second-round pick — Floyd was a first-rounder — and doesn’t have Floyd’s playing experience.

But it’s understandable that Nwosu could be projected for a potential breakthrough season with increased playing time. The Chargers certainly can think positive thoughts in that direction.

Another positive: Drue Tranquill returns after playing only five snaps in 2020. The inside linebacker suffered a season-ending ankle injury in the opener at Cincinnati.

Tranquill said he hoped to make it back before the end of 2020 until doctors convinced him to reassess his timeline after the Chargers sunk from playoff contention.

As a rookie in 2019, Tranquill emerged quickly from special teams contributor to key defensive cog. The Chargers have lofty expectations for him now.

Free agents: The Chargers signed Fackrell to give them depth coming off the edge but also because of his history playing special teams. He had a career-high 10.5 sacks in 2018 with Green Bay.

Draft: The Chargers could use another rotational piece to play inside, particularly given their recent history of linebacker injuries.

Roster decisions: Egbule, a sixth-round pick in 2019, has played mostly special teams through his first two NFL seasons. The Chargers would love to see more from him, even if it’s just having a greater impact covering kicks.