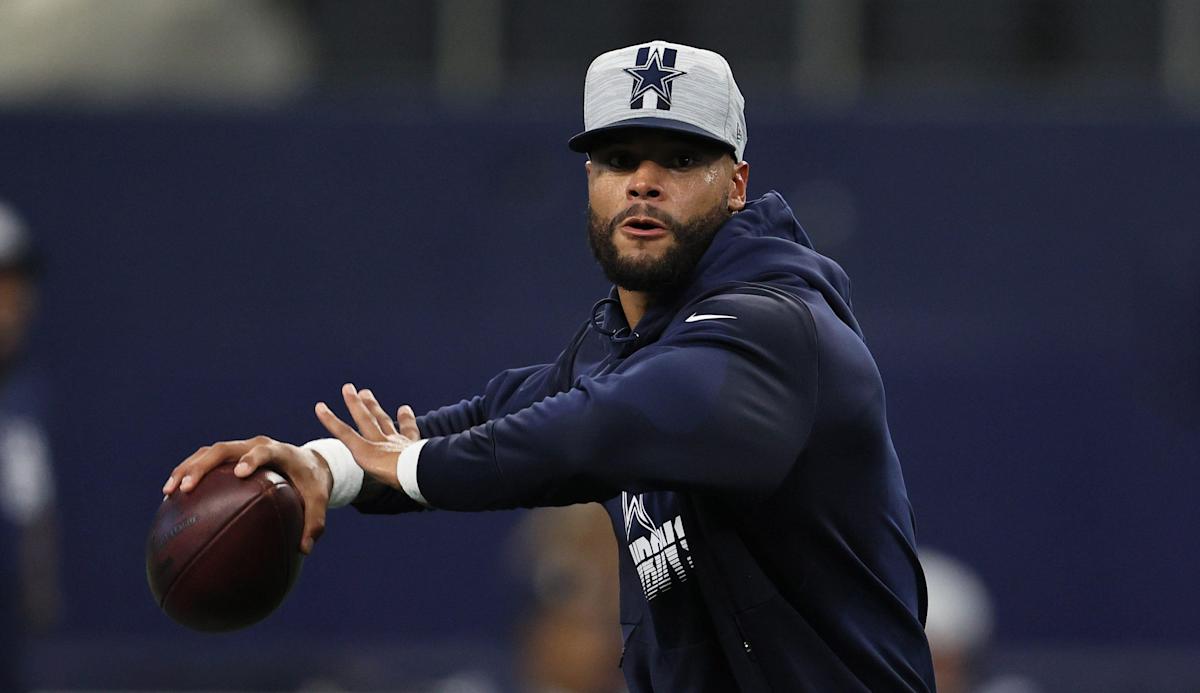 Drones canvassed Dallas Cowboys‘ headquarters at The Star, Jerry Jones’ helicopter had to turn around to retrieve son and executive vice president Stephen, and interceptions were flying off the hands of second-year quarterback Ben DiNucci.

1. What Dak Prescott does, doesn’t fear

The Cowboys quarterback doesn’t flinch when rookie linebacker Micah Parsons talks trash during a game of spades. “I ain’t never feared a defensive guy,” says Prescott ahead of his sixth pro season. The mantra should bode well for Prescott as he prepares for his first live action, 11 months removed from a gruesome ankle injury, against a vaunted Tampa Bay Buccaneers defensive front on Sept. 9

What Prescott does fear: anyone in costumes. The quarterback opened up during a position group meeting after running back Ezekiel Elliott – who has long attended QB meetings to streamline communication – admitted he doesn’t like mascots.

“You think that’s that person in the costume, you don’t know who the [expletive] he is,” Prescott reasoned. “He’s up to something. That’s why I never did anything haunted. I used to tell my mom: ‘That’s the perfect place to kill somebody. Why would I do that?’ I told her that, she understood, never made me. Y’all think it’s a fake chainsaw, you don’t know if one of them crazy [expletive] put a blade on that [expletive] one day.”

Four-time Pro Bowl receiver Amari Cooper missed the first three weeks of training camp practices while rehabilitating foot injuries. He returned eagerly to team drills, telling reporters he had never wanted to run a route so badly in his life. But Cooper wasn’t the only Dallas player to immediately celebrate his return. Second-year receiver CeeDee Lamb was quick to interrogate the veteran on a release he flashed during Cooper’s first day back in competitive drills. Did Cooper work half a man, or his full opponent? And how did he decide when to apply speed?

“The slow will work better because that DB got an internal clock,” Cooper told Lamb while demonstrating how he sells a step left before exploding right. “He can only be patient for so long. The good DBs will be patient. First is just one step. … Then go back in there.

“There’s no way he not thinking I’m going out.”

“Hard Knocks” also featured veteran guidance from Elliott and defensive end DeMarcus Lawrence. Elliott advised rookie running back JaQuan Hardy how best to draw defenders away from him in addition to reinforcing the importance of eliminating lateral movement.

“I understand what you’re doing,” Elliott told Hardy. But “got to run vertical if you’re trying to get a yard rather than trying to run untouched.”

Entering the third of four preseason games, Cowboys leadership had tipped its hat to veteran journeyman Garrett Gilbert as Prescott’s backup quarterback. 2020 seventh-round selection DiNucci was expected to be kept, even if in a practice squad spot as a developmental asset McCarthy was loath to give up on. Then Gilbert lost a fumble against the Houston Texans and DiNucci threw three interceptions. Cooper Rush, competing against them, completed 10-of-12 pass attempts for 97 yards and two touchdowns. Just like that, Rush became the favorite for the Cowboys’ QB2 role. “Hard Knocks” captured sideline emotion during the game.

“Jesus Christ, Garrett!” McCarthy snarled after Gilbert coughed up a ball. It was a far cry from the coach’s “Boom! Hell of a drive” after Rush found receiver Cedrick Wilson for a back-shoulder touchdown connection. Upon seeing DiNucci’s turnovers, McCarthy exclaimed “goddamnit,” which actually was more family-friendly than DiNucci’s verbalized frustration.

“How the [expletive] is that [expletive] getting picked off,” the second-year quarterback out of James Madison University said. “I’m [expletive] fine other than throwing three picks.”

McCarthy drilled the importance of ball security to players in the postgame locker room, reminding them how turnovers doomed their 2020 campaign even before Prescott’s injury had put a damper on it.

“The urgency to be better at that, we’ve got to have it coming down this stretch.”

‘HARD KNOCKS’: 16 most memorable moments through the years

“Hard Knocks” introduced Ivory Coast native Azur Kamara and Mexico native Isaac Alarcon in the second episode. This week, during the third show, each player reappeared. Kamara drew a penalty on defense and contributed one tackle on special teams in 33 total snaps. Lawrence critiqued Kamara’s hesitance to show his speed.

“He’s either going to stay in and block or go out for a pass,” Lawrence told Kamara about rushing against a tight end. “Get rid of him. You don’t need him. You want to go inside …”

Coaches implored Alarcon to ensure he was square, sharpen his three-point stance and keep his eyes up while he engages a defender. Off the field, Alarcon conducted a Spanish interview alongside his older brother and his parents. The family spoke of their Cowboys fandom in Monterrey, Mexico, and what it means to them that Isaac’s helmet is adorned with a decal of the Mexican flag as part of the league’s international players pathway program.

“It’s brilliant,” Alarcon’s mom, Myrthala Garcia, says in Spanish. “It’s magnificent to be able to show everyone where we’re from.”

In practices, second-year cornerback Trevon Diggs aims to snatch passes from talented receivers like Lamb and Cooper. But at home and from the stadium stands, his four-year-old son Aaiden snatched viewers’ hearts Tuesday night.

Aaiden Diggs is the inspiration we all need in 2021.

“All right Tre – believe in yourself!” Aaiden said during the Cowboys-Texans preseason game, sitting with his grandmother. “Make sure you do good! Break those ankles!”

At home, Aaiden flashed the ability to break ankles himself. The four-year-old imitated his father’s defensive back drills as well as receiver drills from uncle Stefon Diggs, the Buffalo Bills’ All-Pro wideout.

His touchdown dance is ready:

If you enjoy talking football, we have the perfect spot for you. Join our Facebook Group, The Ruling Off the Field, to engage in friendly debate and conversation with fellow football fans and our NFL insiders. Do the right thing, sign up now!