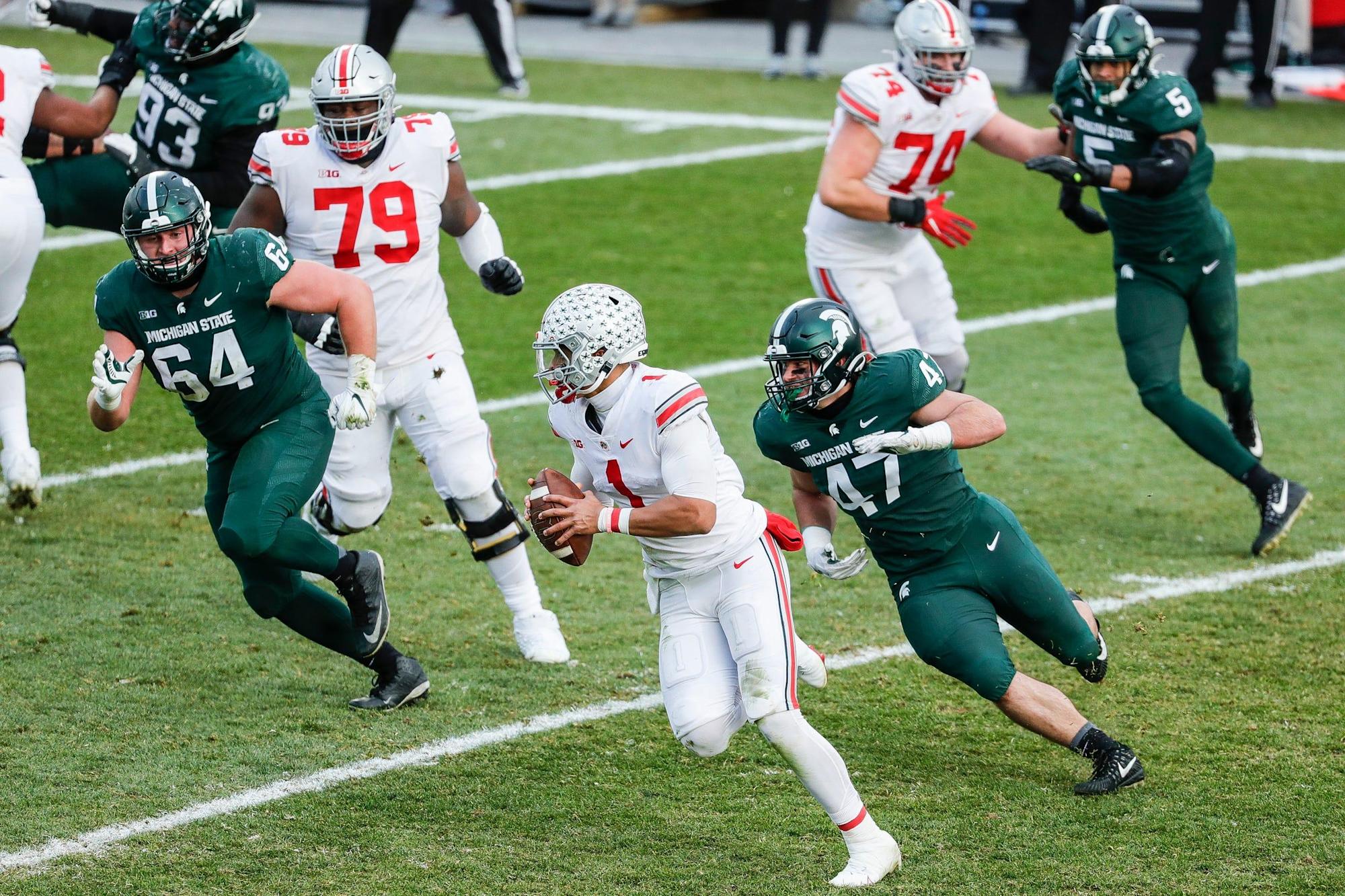 If the Atlanta Falcons do not take their heir apparent to Matt Ryan, the Detroit Lions could have their pick of two of the NFL’s draft most intriguing quarterback prospects.

And if the Lions want to draft their future at the position, ESPN analyst Kirk Herbstreit said Wednesday they would be lucky to have any of Ohio State’s Justin Fields, North Dakota State’s Trey Lance or Alabama’s Mac Jones at No. 7.

“If they’re sitting there in a position to be able to get a quarterback, I don’t think they can wrong with any of these guys,” Herbstreit said. “I mean, Trey Lance, having a (Jared) Goff there to help him learn under a guy that’s a veteran would be very beneficial. I think Trey has a tremendous upside.

“Justin Fields … it’d be hard for me to pass on him at 2, personally, because of what he provides as a player. And then if Mac Jones is sitting there, Mac Jones is — he’s a surgeon. He probably, of all these guys as we sit here right now, probably cause of the offense he’s coming out of, he probably processes as quickly as anybody that’s coming out in this draft.”

The Jacksonville Jaguars and New York Jets are expected to take Clemson’s Trevor Lawrence and BYU’s Zach Wilson with the first two picks, but the rest of the top seven remains a mystery.

Most NFL observers believe the San Francisco 49ers will take Jones at No. 3, while the Falcons at No. 4 are the only other team currently in front of the Lions in need of a signal caller.

Atlanta has indicated it is open to trading down. The Falcons also could consider Florida tight end Kyle Pitts or Oregon offensive tackle Penei Sewell.

Lance is one of the highest-upside prospects in the draft regardless of position.

He turns 21 next month, made just 17 starts in his college career — all at the FCS level — but is built for the modern NFL as a dual-threat quarterback.

In 2019, Lance threw for 2,786 yards and 28 touchdowns without an interception, and ran for 1,100 yards and 14 scores, while leading North Dakota State to a national championship. Last year, the Bison played just one game (Lance had 149 yards passing and 143 rushing) because of COVID-19.

“What he did in ’19 stands for itself,” Herbstreit said. “That’s absurd in high school let alone in college. And so, what he can do as a player, his physical traits and abilities speak for themselves, but I just think because he wasn’t able to play a year ago, I think it would be ideal for him to go somewhere where he just gets a chance to kind of learn how to be a pro, learn under a guy that’s not intimidated or afraid of him. Learn from an offensive coordinator, head coach, a quarterback that are helping him kind of move throughout the year and grow, and then hand him the reigns and go.”

The Lions acquired Goff in a January trade for Matthew Stafford and have committed to him this fall as their starter.

Jones, like Lance, has only 17 career starts, though most of his came in the talent-laden SEC, where he threw for 4,500 yards and 41 touchdowns while leading Alabama to a championship last season.

Fields, a two-year starter at Ohio State, is the most experienced of the three quarterbacks and like Lance, a dual threat.

Herbstreit said he believes Fields has the work ethic and pedigree to be a successful quarterback in the NFL. Fields went 21-1 as a starter at Ohio State and amassed more than 6,200 yards from scrimmage.

“Justin Fields to me is exactly where the NFL is trending, as far as his physical skill set,” Herbstreit said. “I love his versatility. He can throw the ball downfield, he can throw the ball intermediately. He’s got the levels concepts. And he can create off platform very comfortably, so I don’t think you’re pigeon-holed if you take him. I think what I just described covers a lot of offenses.”