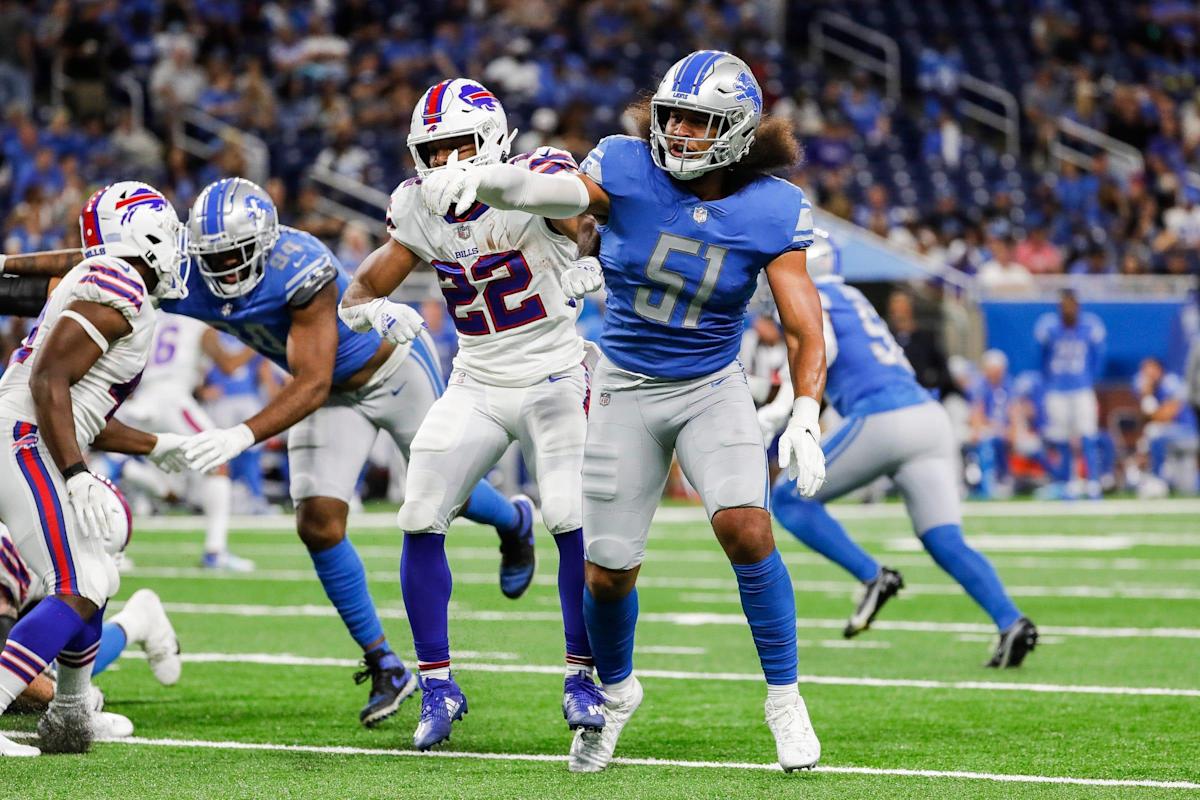 Tavai was, at best, the Lions’ fifth inside linebacker and appeared to play himself out of the mix for a roster spot in recent weeks.

He struggled in pass coverage this preseason and occasionally misdiagnosed plays, and those errors overshadowed the good work he put in this offseason transforming his body to try and better fit the Lions’ image for a linebacker.

COVID vaccine a non-issue in cuts

The Detroit Lions finished training camp with a half-dozen or so players who refused the COVID-19 vaccine, but coach Dan Campbell said vaccination status was not something he and Brad Holmes considered when setting their 53-man roster.

“I don’t think that came into play as far as the 53 is concerned,” Campbell said Monday as he left the lectern at the front of the Lions’ outdoor media room before stopping to offer a more resolute: “It didn’t come into play.”

The NFL has two sets of rules in place for vaccinated and unvaccinated players this fall. Unvaccinated players must wear masks, undergo daily COVID-19 testing and are subject to social distancing restrictions similar to the rules all teams operated under last year. Vaccinated players are tested every other week, do not have to wear masks and have more freedoms on road trips and inside team facilities.

The Lions have placed three players – Nick Williams, Jalen Reeves-Maybin and Evan Heim, who is vaccinated – on the reserve/COVID list this summer. Williams, who is a lock to make the 53-man roster, and Mike Ford, who was waived Monday, are among the Lions who have said they are not vaccinated.

While Campbell said vaccination status will not factor into the team’s 53-man roster decisions, it could impact practice squad decisions. The Lions are among the many NFL teams who have inquired about the vaccination status of players they consider bringing in for workouts, multiple agents have told the Free Press in recent weeks.

Positions to target on waiver wire

Dan Campbell acknowledged the obvious Monday when he said “there’s going to be some guys that are going to be on our team that aren’t even in the building yet.”

The Lions have one of the weakest rosters in the NFL, so it makes complete sense for them to target upgrades on the waiver wire as cuts filter in from the league’s other 31 teams this week.

While it’s too early to say what players will be available, and thus of interest, there are several obvious positions the Lions will be monitoring.

Backup offensive tackle is atop the list. The Lions waived-injured Tyrell Crosby and Dan Skipper on Monday, leaving them with just Matt Nelson and Darrin Paulo as swing tackle options. (Halapoulivaati Vaitai could move from guard to tackle, and the Lions could play Logan Stenberg or Tommy Kraemer in his spot.)

THE FUTURE: Meet 10 elite college quarterbacks the Lions could eye in 2022 NFL draft

Offensive line depth is putrid across the league, so even with prime waiver position – seventh overall — the Lions could face competition for any remotely decent tackle who becomes available.

Beyond the line, I’d guess wide receiver, tight end, inside linebacker and cornerback are the positions the Lions are most likely to make a move at.

Campbell said Tom Kennedy has “an inside track” at the No. 5 receiver job for now, but if a player like the New England Patriots’ Kristian Wilkerson hits the waiver wire he could be too temping to pass up.

At tight end, I would be mildly surprised if either Alize Mack or Brock Wright made the team at this point, though Wright strikes me as a good practice squad candidate. Neither Jahlani Tavai nor Anthony Pittman seems like a long-term solution at linebacker, though having a fifth player at that position could be important for special teams purposes. And the Lions will be looking for an upgrade in the cut pile for one of their two veteran slot cornerbacks, Corn Elder or Nickell Robey-Coleman, though even serviceable cornerbacks rarely hit the waiver wire.

“(It) was about, ‘Let’s look at these guys on other teams, potential releases on other teams, guys that may be a fit, what do we think, rank them to who’s here.’ All those things,” he said.

More on some of these later, but here is the list of roster moves the Lions made Monday.

The Lions have made their first surprising move of roster reduction week, cutting special teams ace Mike Ford, according to a person with knowledge of the move.

Ford played both slot and outside cornerback in training camp, but his real value to the team was as a gunner, where he was easily one of the Lions’ best coverage players.

“Love brudda,” Jacobs wrote. “Appreciate you for everything my dawg keep at striving for greatness!!!”

Ford surely will find special teams work elsewhere in the NFL, but the move could be good news for a couple other Lions on the roster bubble.

Undrafted rookie A.J. Parker, who took first-team slot cornerback reps the past three weeks (after Ford opened camp at the position), already seemed like a roster lock after shining in preseason games. But Bobby Price was fighting for a backup job after converting from safety to cornerback in August, and there could be room now for one or both of Corn Elder and Nickell Robey-Coleman, veteran slot corners who had disjointed training camps.

Price is a talented special teams player who took first-team gunner reps opposite Ford most of camp. Elder missed time this summer with a hamstring injury. And Robey-Coleman was a late addition to the roster.

I don’t imagine this played any part in the move, which may have been more about fit than anything, but I think it is worth noting Ford was among the handful of Lions players who is not vaccinated against COVID-19.

Lions coach Dan Campbell is scheduled to meet with reporters later Monday morning, and Ford’s release will be one of the topics of discussion.

The Lions have until 4 p.m. Tuesday to cut their roster to 53 players, but they made their first of what should be several moves Monday when they informed receiver Breshad Perriman of his release.

Perriman struggled throughout camp, both on the field and with a hip injury that cost him playing time.

He had two drops in last week’s preseason loss to the Indianapolis Colts and an offensive pass interference penalty a week earlier against the Pittsburgh Steelers.

If you’ve followed the Lions at all this summer, you can’t be too surprised by the move, even given the state of the Lions receiving corps.