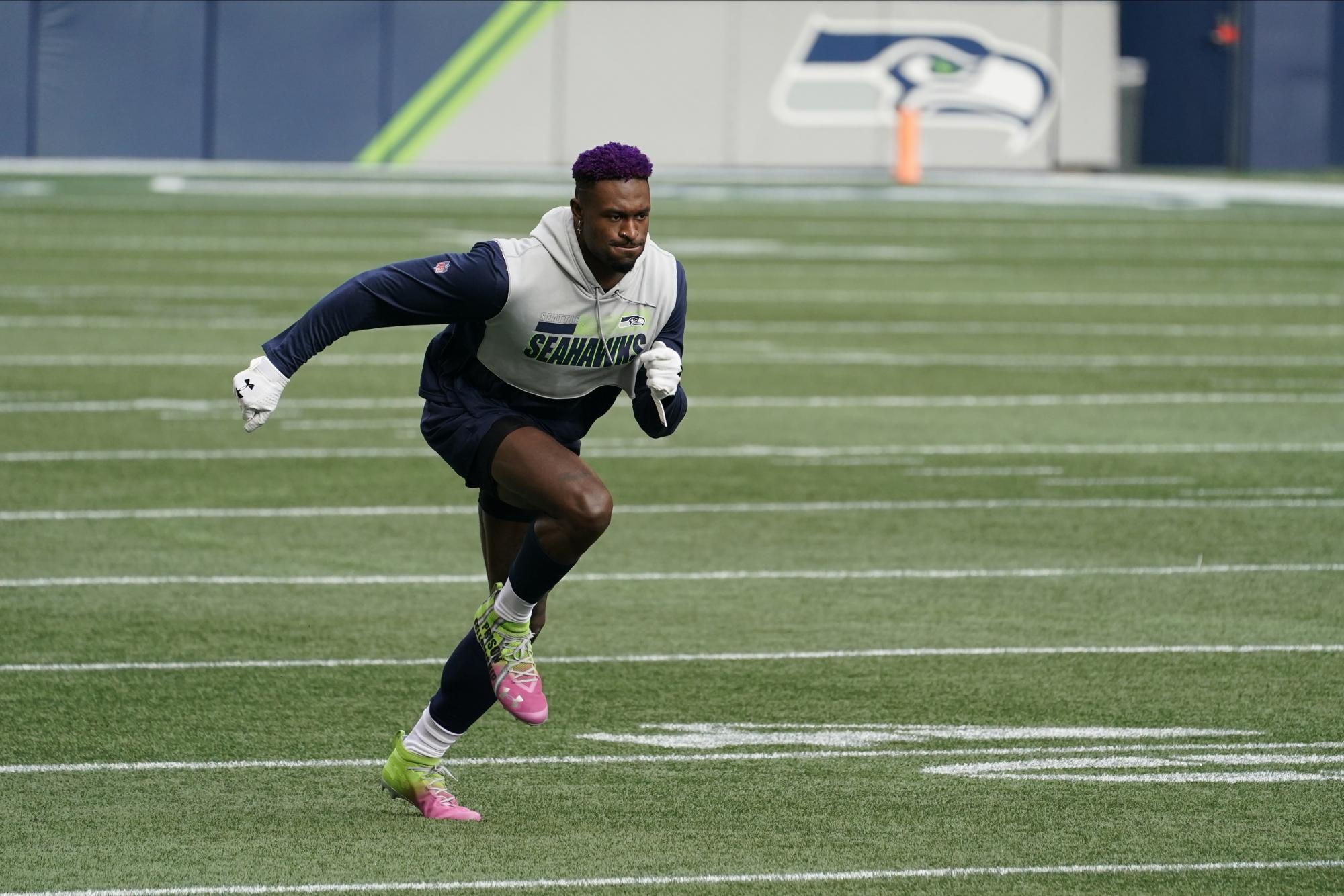 One of my pet peeves when watching the NFL broadcasts is when announcers will say a player has “track speed.”

I guess if we’re not distinguishing what level of track and field we’re talking about, then really everyone has track speed.

But elite track speed? That’s rare. Outrunning some fellow NFLers on a kick return or an opponent who thinks he has an easy pick-6 does not a track star make.

Seattle Seahawks receiver DK Metcalf may learn that the hard way this weekend.

Metcalf has accepted an invitation to run the 100 meters at the USA Track & Field Golden Games at the famed Mt. San Antonio College track in Southern California, one of 15 men entered in the event. He took to Instagram and Twitter to hint at what he was up to this weekend, with a short video clip of spikes being dropped on a track and “May 9th” written on the screen. USATF filled in the blanks on its Twitter feed.

The idea of Metcalf getting on the track came after he chased down Arizona’s Budda Baker last October, preventing what Baker likely believed was going to be an easy touchdown. It was a great play, the type that will follow Metcalf for the rest of his career. Much like now-retired tight end Benjamin Watson, whose out-of-nowhere tackle Denver’s Champ Bailey to save a touchdown in the 2006 playoffs has been part of Watson’s story ever since.

To be clear: It’s dope that Metcalf is taking on the challenge of running on Saturday and facing some of the best sprinters on the planet, including Mike Rodgers, a member of the 2019 World Championships gold medal-winning 4×100 team. Whether he’s been training seriously for a couple of weeks or sees it as a fun distraction, if he brings some viewers to the meet who wouldn’t have watched otherwise, it’s a good thing for track and field.

The sport remains somewhat niche in this country, especially from the standpoint of television ratings, even though America’s depth, across all events, men and women, is arguably the strongest it has ever been.

But the idea that Metcalf has a chance to qualify for the U.S. Olympic Trials in six weeks is completely unrealistic, and a bit of an insult to the athletes who dedicate their lives to perfecting every phase of their races in pursuit of a spot in the Olympics.

That’s not meant as a slight to DK. It’s just reality.

He hasn’t competed in a track meet since 2016, when he was a senior at Oxford High in Mississippi. Metcalf didn’t run the flat 100, rather focusing on the 110 meter hurdles, with a personal best of 14.89 seconds in the event. It’s a great time that was seventh-fastest among high schoolers in the state that year.

You can’t wake up one morning and decide to try to qualify for the Olympic Trials. Particularly not if that morning is roughly two months before said event occurs. It’s no different than saying someone who hadn’t played football since high school five years earlier woke up two months before the NFL draft and wanted to be a second-round pick like Metcalf was in 2019.

The USATF automatic qualifying standard in the men’s 100 just to gain entry to the Trials is a 10.05-second, wind-legal performance. (Wind-legal means a tailwind reading under 2.0 meters/second.) At the moment, 15 American men have already matched or bettered that mark.

The Trials field will be 32 runners, so if 32 men don’t hit that mark before the meet, the remaining spots will be filled with the next-fastest men. In 2016, it took a 10.16 or better to get a berth at the U.S. Trials.

Outsiders may believe running a 100 isn’t that hard, but it’s incredibly technical, and raw foot speed is only the beginning. The block start is critical, and elite runners will spend hours training to get it just right; at the relatively short distance, races can be won and lost in the first 15 meters, if a sprinter has a phenomenal start or falters at all and can’t recover. Once you hit top speed you have to be able to maintain it through the finish line, every stride powerful and purposeful, your arms pumping in harmony, your face and shoulders relaxed.

The United States Olympic track and field team is the hardest team to make in the world. Because of our country’s dominance in the sport we can bring three competitors in each event, and getting to be one of those three is a feat all its own.

For perspective, the American women swept the medals in the 100-meter hurdles at the 2016 Rio Olympics. Kendra Harrison, who was the world No. 1 going into the Trials that year and broke the world record later that summer, didn’t even make the team.

It’s early in the outdoor track season, but currently six of the seven fastest 100-meter times in the world this year have been posted by American men, led by Trayvon Bromell’s 9.88 seconds last Friday in Florida.

If Metcalf surprises and runs 11.0 or even 10.8 seconds this weekend, it will be remarkable, truly. Given that he’s spent years focused on football-specific training, and given that he’s built more like a discus or javelin thrower than pure sprinter at 6-foot-4, 235 pounds, running that fast will cement his status as a special athlete.

But football speed and Olympic-hopeful track speed are not the same.