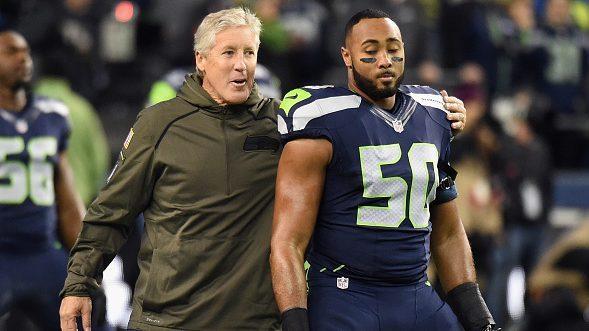 One of the most prominent members of the Seattle Seahawks over the last decade, linebacker K.J. Wright, remains unsigned as a free agent. After 10 seasons with Seattle, Wright has yet to find a team willing to sign him for the 2021 season. That includes his long-time employee in Seattle.

Seahawks head coach Pete Carroll said on Thursday that the door isn’t closed to Wright returning to the team for the upcoming year. However, they’re currently moving forward with the options they have until they have a better chance to see how their roster looks later in the summer.

“Until we get on the field and can see how things are starting to come together there won’t be major changes in what’s going on because we’re pretty committed at this point,” Carroll said. “That doesn’t mean that we’re not tuned into all of the options and the opportunities that are out there because we are. But K.J. is OK at this point. He’s doing fine. And if we get a chance to call on him we’ll go after it and see if we can put something together.”

The Seahawks used their first-round pick last season on a linebacker in Jordyn Brooks. The selection of Brooks, paired with an early season injury to Bruce Irvin, led to a role change for Wright. While he would remain in his traditional position alongside Bobby Wagner in nickel situations, Wright would move to the strong-side spot in base formations so Brooks could get on the field at a natural spot off the ball. Brooks really started to shine in the latter stages of his rookie season as well, which seemingly led Seattle to be willing to turn the page on Wright. General manager John Schneider has even said he expected Wright would have signed elsewhere by now given just how strongly he played last year for the Seahawks.

So far that hasn’t happened.

The Seahawks had approximately 35 players on the field for their OTAs on Thursday, per Carroll, as veterans are working out on their own. The group is camp mostly consists of rookies that took part in their rookie mini-camp last week. While the Seahawks are expecting most of their roster to be on the field for their mandatory mini-camp next month, it won’t be until training camp until they’ll get a really extensive look at the roster. An injury to Brooks or Wagner could change the calculus rather quickly as well. However, the Seahawks appear likely to stand pat for the time being.