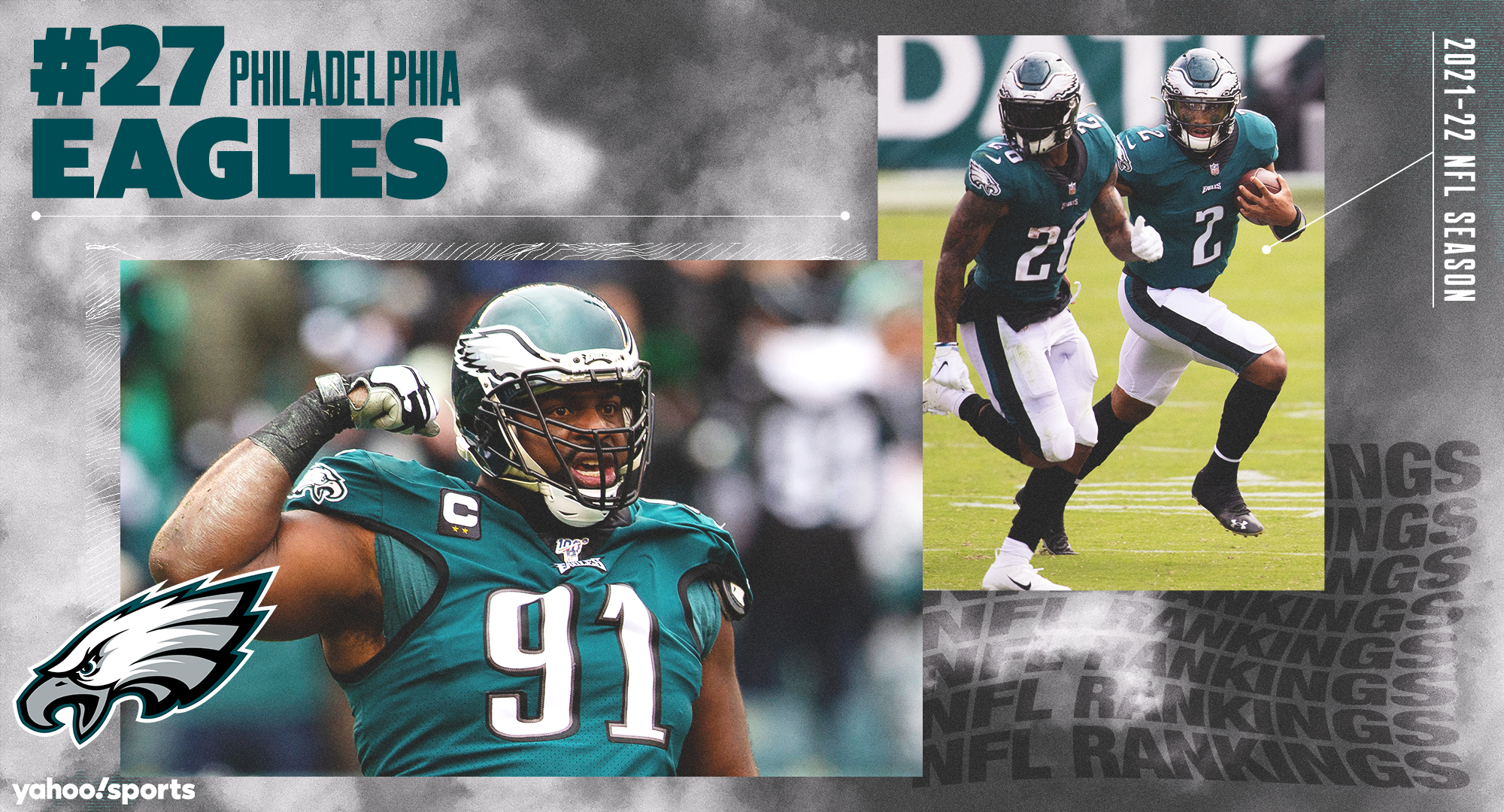 Imagine if the Philadelphia Eagles hadn’t won that Super Bowl just a few years ago.

The three seasons since that championship have been a fiasco. The Eagles underachieved in each of them. They jettisoned the head coach who won the Super Bowl and the young quarterback who was once the shining star of the franchise. There have been endless headlines describing the dysfunction of the organization, most notably the meddling of owner Jeffrey Lurie.

It had to be tough for Eagles fans to watch the team fall off so fast. Then again, it would be infinitely worse had it not been for that Super Bowl win over the New England Patriots.

This preview is about the 2021 Eagles, not the 2017 team, and it’s hard to know where to start. It’s a team stuck between a full rebuild and trying to make a run at the playoffs again. They can have some hope for a big rebound because there are still some players from the glory days and the NFC East isn’t that tough. But it’s clearly a franchise in transition.

The head coach is new. Doug Pederson was great in 2017 and not so good since then. Maybe the fall was due to the departure of key assistants, most notably current Indianapolis Colts coach Frank Reich. Maybe it was due to Lurie and the general dysfunction of the front office (an unnamed source said in an explosive story by The Athletic, “The fact that Doug had the success he did with all the s— going on in the building, sometimes I look at our Super Bowl rings, and I’m like, ‘Holy cow, I don’t know how we did it.'”). No matter the circumstances, Pederson didn’t do much with a fantastic roster in 2018 and 2019, then things fell apart last season and he’s gone. Nick Sirianni, from Reich’s staff in Indianapolis, takes over.

The quarterback on opening day will be new. Carson Wentz had a career in Philadelphia that would be hard to find a comparison for. He was the best quarterback in the NFL in 2017, an MVP favorite, before tearing his ACL. He was stuck in the awkward situation of watching his backup, Nick Foles, win a Super Bowl later that season. Injuries held him back the next two years, but he still had moments of good play on a bad team. In 2020 the wheels totally fell off. He became a turnover machine. He was benched. There was a lot of turmoil that became public, and Wentz was traded to the Colts for a 2021 third-round draft pick and a conditional 2022 second-round pick. That’s a heck of a wild ride, especially considering Wentz is just 28 years old and five seasons into his NFL career. Jalen Hurts will take over at quarterback, and Lurie has been criticized for pushing that decision on the staff.

The Eagles took some shots on veterans in trades, and while most moves didn’t work out, it’s hard to blame them for chasing another Super Bowl. They traded some draft picks in those moves, and missed on too many of the picks they did keep. That is how you go from the top of the NFL to the bottom in a hurry.

But the Eagles’ fall seems to be about more than missing on Andre Dillard in the first round or picking Jalen Reagor over Justin Jefferson. Given the stories that come out of Philadelphia all the time it’s hard to believe, to echo the words of that unnamed source to The Athletic, how the Eagles ever got to the top of the mountain with all the stuff going on in the building. It makes it equally hard to believe it’ll be a quick ascension back to the top.

It had to be hard to trade Carson Wentz. It was inevitable after Wentz struggled and the relationship between the team and player dissolved, but he was still a player who looked like he’d make multiple Pro Bowls in Philly. That era ended way before anyone expected. That trade was the biggest move of a quiet offseason. The Eagles had major salary cap issues, so they let go of some veterans and watched free agency pass by. The biggest loss was safety Jalen Mills to the Patriots, but the Eagles signed Anthony Harris from the Minnesota Vikings to replace him. Harris was the only free agent to get at least $4 million from the Eagles. First-round pick DeVonta Smith was the biggest addition, a great college receiver who will always be questioned due to his size. The Eagles couldn’t do much this offseason because of their cap issues, and it’s hard to say they’re better.

However the Eagles got to the decision to start Jalen Hurts this season, it was the right call. The Eagles made a strange call to draft Hurts in the second round last year, but they did make that investment and he did fine in his four starts in place of Wentz. In his second start at Arizona, Hurts threw for 338 yards and three touchdowns, while running for 63 yards and a score. He was electric. That game alone was enough to give him a shot this season. Hurts wasn’t polished last season, but he was a second-round rookie taking over for a failed starter. It’s time to see what Hurts can do before mapping out a different course.

BetMGM set the Eagles’ win total at 6.5. Lost in all the crazy headlines, the Eagles still have blue-chip talent. Offensive linemen Lane Johnson and Jason Kelce, cornerback Darius Slay, defensive linemen Fletcher Cox and Brandon Graham have all been among the best in the NFL at their positions. There are some young players who still could break out. It’s possible a coaching change will help. There are too many questions for me to take the over, but it shouldn’t be a total shock if the Eagles surpassed their modest expectations. It’s a pass for me, with a slight lean to the under.

Philadelphia has had some bad luck with injuries. Last season, the Eagles had the second-most adjusted games lost due to injury, via Football Outsiders’ metrics. (If you include COVID-19 issues, the Eagles lost the third-most games.) First-round pick Jalen Reagor got hurt in training camp and missed four games, hindering his development. Miles Sanders missed four games as well. Only two players who gained a yard for the Eagles last season played all 16 games (Greg Ward and Boston Scott). Jason Kelce was the only offensive lineman to start all 16 games, and only two regular defenders didn’t miss a game (Brandon Graham and Alex Singleton). Some better injury luck would at least allow us to see how good the Eagles really are.

Can Nick Sirianni be an upgrade over Doug Pederson?

Sirianni did not win his introductory press conference. Winning a media conference is a weird notion anyway, but a less-than-ideal quote or misplaced enthusiasm can stick to someone for a long time. It’s not fair, but that’s the social media era. Sirianni was amped up the first time he met the Philadelphia media, talked excitedly and often about his “systems,” and Twitter couldn’t let it go. But Sirianni’s enthusiasm isn’t a bad thing, and it will play just fine in Philly if he wins. Sirianni was a surprise choice for the Eagles (also not necessarily a bad thing), but he comes from a good Colts organization and he’s the type of young offensive mind many teams are chasing. Pederson will always have a special place in Eagles history, but the past few years were not good. Whether that was due to factors out of his control, or Pederson being the Mark Rypien of coaches (one undeniably great year and little success before or after), we don’t know. But it clearly wasn’t working anymore, and Sirianni might pump some new life into the organization.

You can talk yourself into the Eagles making a run at an NFC East title, and not just because the division stinks. If Jalen Hurts plays like he did at Arizona last season, old veterans stay healthy, young players like Miles Sanders and Jalen Reagor emerge, DeVonta Smith is as unstoppable in the NFL as he was at Alabama, and the defense plays well around stars Fletcher Cox and Darius Slay, the Eagles could be pretty good. That’s a lot of ifs, of course.

In 2018 and 2019 the Eagles underachieved with a talented roster, but still made the playoffs. In 2020 they were bad. Given all the stories about the dysfunctional organization, it seemed the franchise was in freefall. Maybe the freefall will keep going another year. We don’t know how Jalen Hurts will look over a full season, if Nick Sirianni can coach or if the talent on hand is either on the decline or will never develop. A lost offseason due to salary cap woes doesn’t help. And just imagine the reaction if Carson Wentz is great in Indianapolis.

The Eagles, for one reason or another, botched a chance to be a mini-dynasty. They were set up well. They whiffed on many personnel moves — GM Howie Roseman is still around, which perplexes some Eagles fans — and the infighting seemed to eliminate any remaining chance of getting back to another Super Bowl. Perhaps we can blame Doug Pederson and Carson Wentz and assume that because they’re gone the Eagles will bounce back, but the problems seem deeper than that. It might be another long season in Philadelphia. And if it is, there will be more wild stories to follow.