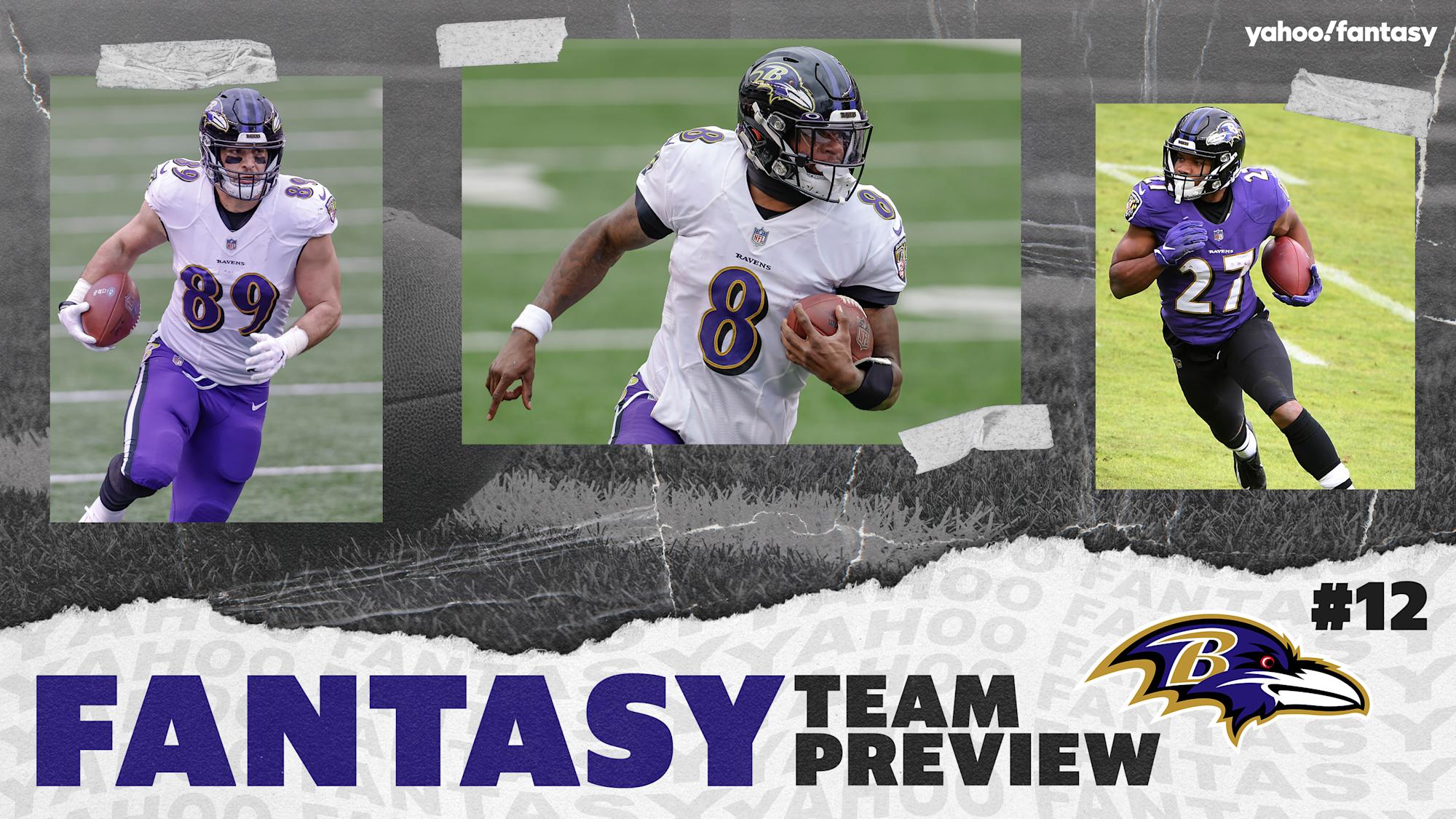 We’re previewing every NFL team to get you ready for the 2021 season. Our analysts will tackle pressing fantasy questions and team win totals, in order from the squad with the least amount of fantasy relevancy all the way to the most talented team. Next up, the 12th-ranked Baltimore Ravens.

Andy, you have Lamar Jackson as the overall QB1 (something you correctly called in 2019). Liz and Scott, you have Patrick Mahomes, Josh Allen, and Kyler Murray ahead of him. Make the case for why you’re right and the other is wrong.

Andy: The basics of the case for Jackson as QB1 can be found in the video above. We’re talking about a player who, at age 22, produced the best per-game fantasy scoring season in the history of his position. Lots of analysts tend to discuss Jackson as if he’s somehow already peaked, but the man won’t even turn 25 until January. He’s an ascending talent, a back-to-back 1,000-yard rusher who averages 6.0 YPC, and his receiving corps improved in a big way in the offseason (Hello, Rashod Bateman.) Considering his otherworldly running ability, it’s not crazy to expect a double-digit rushing TD season at some point.

I don’t consider Jackson to be a tier-of-his-own quarterback, just to be clear. I think Mahomes and Allen should be drafted in the same neighborhood. But no one else at this spot has the sort of rushing upside that Jackson brings to the party, and he’s set up for a high-yield passing season as well.

Liz: It’s not that Andy is wrong. The points he makes above are thoughtful, cogent, and smart — signature Behrens. It is by no means impossible that Lamar could return to QB1 status … but the lack of offensive balance constricts Lamar’s avenue to production. Mahomes, Allen, and Murray are all dual-threat QBs who exist on pass-friendly squads that also regularly utilize them as rushers.

Last year Jackson was the QB1 in total carries (159) but he was also the QB32 in pass plays per game (27.4). Meanwhile, the three QBs I have ranked ahead of Jackson were all at least top-17 in pace and additionally top-14 in carries per game. Furthermore, they each averaged around 4.5 deep ball attempts per contest (which was significantly higher than Jackson’s 3.1/gm). The Ravens have been trying for seasons to provide Jackson with more receiving talent (where you at, Miles Boykin?) but, as of yet it hasn’t clicked … and forgive me for not believing Sammy Watkins is the answer.

Scott: Allen and Murray can match Jackson’s rushing chops, but they have more help in the passing game (and Allen is a better passer, anyway). As for Mahomes, he has the highest floor of everyone here, not to mention the insulation of Andy Reid, Travis Kelce, and Tyreek Hill. I’m not dug in on the idea that Jackson belongs at the bottom of this tier; it’s a clustered group, and any theoretical ordering would be defendable. And I’m unlikely to make a Home Run pick at quarterback anyway; I’d like to see if I can find a Top 5 quarterback without having to shell out significant ADP capital.

J.K. Dobbins is our consensus 15th-ranked running back on a run-first team, but if he’s sitting there at the end of the third/top of the fourth round, would you take him over some of the backs like Clyde Edwards-Helaire, Najee Harris, or D’Andre Swift?

Scott: Harris shouldn’t be here, as the Steelers show every inclination of handing him the keys to the reworked offense. The other three are interesting comps, in part because they’re all second-year players who were part trick and part treat during 2020. Until I can feel comfortable with Dobbins getting a step forward in the passing game — part of that is on the Baltimore play designers, part of that is on Jackson — he will be the final option for me in this tier.

Andy: For me, he doesn’t belong in the conversation with Harris, a player who’s locked into a full workload that includes significant receiving volume. In any sort of PPR format, I’d give CEH an edge as well. It’s fine for fantasy managers to hope for a change in Dobbins’ usage, just as we all wanted more targets for Josh Jacobs a year ago. But the fact remains, Dobbins saw only 24 total targets last season with just two in his final five games; the Ravens’ top four running backs combined for only 50 targets. There’s simply no receiving volume to be found for Dobbins unless you think the team’s offense will undergo dramatic change.

Liz: This iteration of the Ravens will never exist as a pass-first operation, but Dobbins’ emergence as an every down player is highly probable. His increased usage in the red zone (26 RZ totes over the back half of the season versus just two RZ opportunities before Week 8), in tandem with his ability to convert at the goal line (88.9%) places him solidly in the RB17-20 range.

BUT … I have Harris at RB15 because of his projected volume (I don’t view Benny Snell to be as much of a “threat” as Gus Edwards is, who the Ravens just signed to a two-year, $10 million extension). And I have CEH as my RB16: despite an underwhelming rookie season, he’s still an RB attached to Patrick Mahomes (Darrel Williams remains on the squad, but is on a deal worth only $930K guaranteed).

3. Mark Andrews has shown the capability and production to be one of the top-three fantasy options at the position, but the Ravens have added more talent to their wide receiver room for 2021. What’s the more likely scenario this season: Andrews finishes in the top three, or outside the top 8?

Liz: Positionally, Andrews’ target share has been in the top-three for back-to-back seasons. While his TDs regressed from 10 in 2019 to 7 in 2020, he continued to lead the team in red-zone looks. He’ll continue to get opportunities near the goal line as Lamar’s most trusted weapon in the red area of the field. The lack of overall passing volume, however, is why he’s ranked outside of my top-three (behind Kelce, Kittle, and Waller, all of whom averaged more targets per contest) and is instead my TE5.

Scott: A great question and I don’t have an air-tight answer. You want your fantasy tight end to be no worse than the No. 2 option in his team’s passing game; have the Ravens finally added enough receiver talent to bump Andrews down to the three spot? I can see cases either way. That said, if I’m going to draft a tight end in the ADP pocket of Andrews, I’d prefer T.J. Hockenson, who has more theoretical upside and probably an easier path to a monster target total. As talented as Andrews is, he’s never topped 98 targets in a season. Baltimore’s passing game is never going to be a volume grab.

Andy: It only takes an injury to knock him out of the top-8, so I suppose that’s the most reasonable answer. But he’s a clear favorite of Jackson’s near the goal-line, which gives him a shot at a significant touchdown total. Andrews is definitely on the watch-list to have one of those Ebron-in-2018 or Tonyan-in-2020 seasons, with a crazy ratio of TDs to total receptions. If he stays healthy, he can certainly reach double-digit scores, which would comfortably land him inside the position’s top-3.

Scott: I could only shade UNDER on this number, though it’s probably a no-punch for me. Cleveland and Pittsburgh are also legitimate divisional contenders, and Cincinnati figures to be improved. If you rank the 2021 NFL schedules based on the Vegas over/under totals, Baltimore’s slate is a little harder than average. There will be opportunities to pounce on bad numbers this summer; this isn’t one of them.