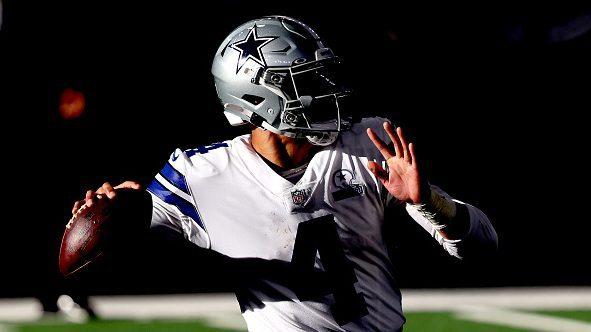 It’s been nearly seven months since Dallas Cowboys quarterback Dak Prescott fractured his ankle in a game against the New York Giants. Prescott has been back on the practice field during OTAs for the Cowboys as he works his way back into form following his extended rehab from the injury last October.

Cowboys head coach Mike McCarthy has been impressed with Prescott’s efforts to get back on the field and the form he’s shown during the early stages of the offseason.

“He’s been here working out the whole time so you’ve been able to watch him go through the rehab process and through the footwork and quarterback drills throughout that,” McCarthy said on the Cris Collinsworth podcast, via R.J. Ochoa of Blogging the Boys. “But to see him throw behind the offensive line, I know he was excited about it.”

Prescott was off to a brilliant start to last season as he tried to carry a flawed Cowboys roster. He had three games with at least 450 yards passing with nine touchdowns and three interceptions in his four complete games before his injury in Week 5. Prescott has said he feels back to his old self even as the Cowboys have been limiting his as a precaution in the early days of OTAs. Whether he’s all the way back already or not, he has until September to get there. With the efforts he’s put in so far this offseason, it appears he’s well on his way.

“It’s great to have Dak out there,” McCarthy said. “He puts so much into it. His energy and his work ethic is off the charts. We’ve had two really good days and we need to hit these next six and feel good about where we are. But yeah, no doubt, it’s great to see the progress that he’s made because I don’t know if he’s taken a week off. He’s been here every day since the injury. We’re off to a good start there.”

Mike McCarthy: Great to see progress Dak Prescott has made on the field originally appeared on Pro Football Talk