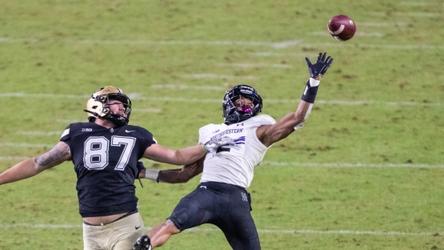 After a 2-14 season, the Jets enter 2021 with a brand-new head coach and two picks in the first round of the NFL Draft.

With Zach Wilson looking like the consensus No. 2 pick for the Jets, here’s what the experts think they could do with the 23rd overall pick.

Moore is a beast and a nightmare to tackle after the catch. He’s neither a burner nor a huge physical specimen, but he fits everything the Jets are looking to be. Think Deebo Samuel, with his ability to carry the ball, catch the ball and generally be a DC’s headache week in and week out.

Collins looks like Anthony Barr 2.0, and the Jets need more talent on their defense.

New York made the decision to trade Darnold and draft a quarterback. Wilson was the official start to the Robert Saleh era but he starts infusing his personality into the defense with the selection of Newsome. When talking about the core pieces on defense, it starts with the defensive line and the cornerbacks. General manager Joe Douglas has added Carl Lawson, Sheldon Rankins and Newsome and are not done.

The fit for Newsome in Robert Saleh’s defense is ideal. His feel and closing ability in zone coverage should translate nicely to a defense that currently sees guys like Bryce Hall, Blessuan Austin, Lamar Jackson and Javelin Guidry atop the position — none of whom were drafted before the fifth round. Newsome allowed just 12 of the 34 passes thrown into his coverage to be completed this past season at Northwestern.