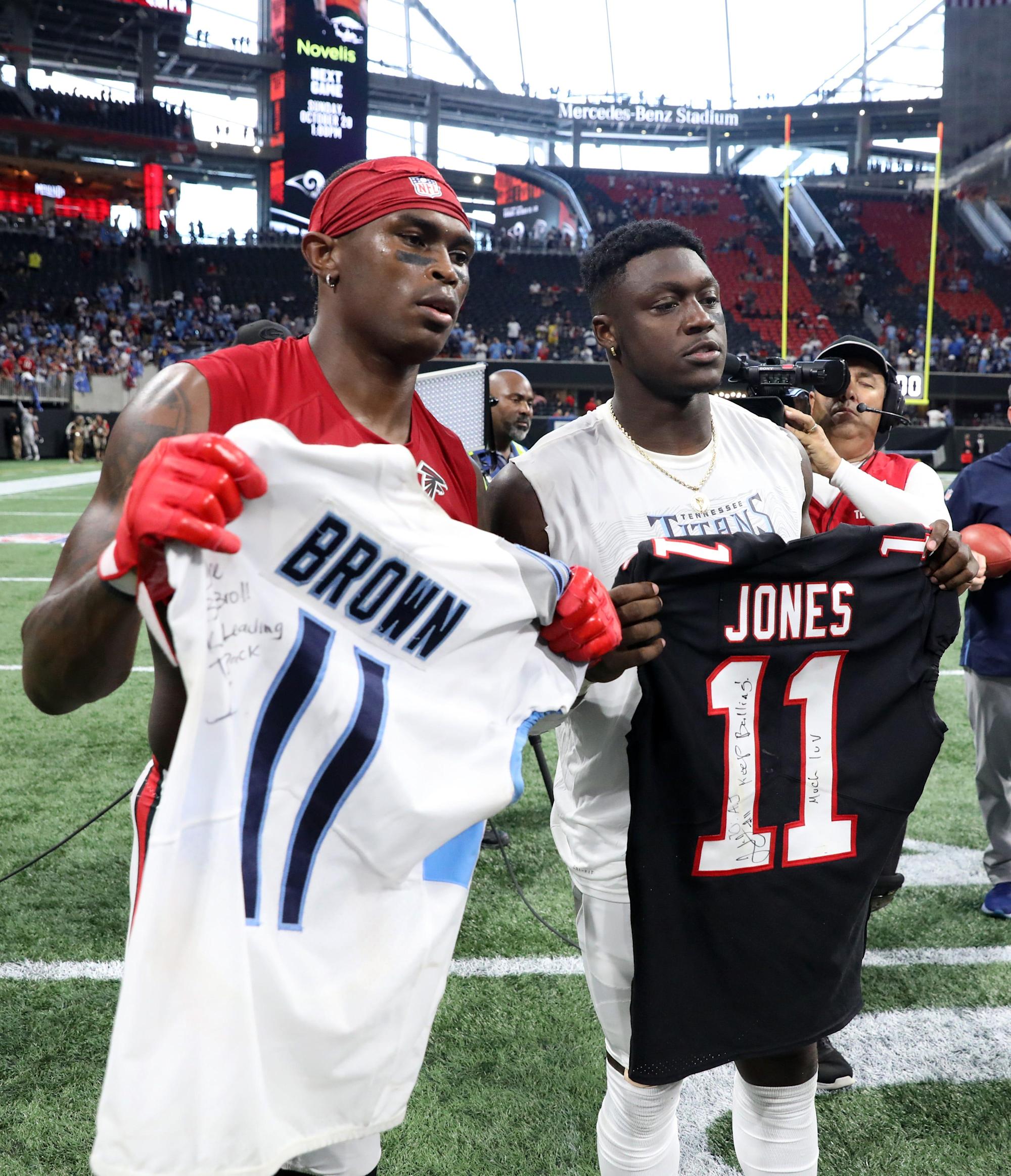 Meanwhile, Jones’ former team, the Atlanta Falcons, officially acknowledged they’re effectively entering rebuild mode after agreeing to trade arguably the best player in the history of their franchise – while having to settle for modest (at best) compensation for their trouble.

As with any deal of this magnitude, the fallout is likely to have a significant impact on the NFL landscape. Who stands to benefit most? Who doesn’t? Let’s dig into the ramifications as Jones moves approximately four hours up the road from Atlanta to Nashville:

Titans: They’ve reached the playoffs in three of the past four seasons, won the AFC South in 2020 and fell roughly two quarters short of claiming the AFC championship following the 2019 season. Now Jones, who’s averaged nearly 1,300 receiving yards per season during his 10-year NFL career (despite missing 25 games), joins the mix for a franchise that has had four 1,300 receiving-yard efforts in its 62-year history. (Jones has six incidentally.) Squarely within what seems to be a prime Super Bowl window, Tennessee’s chances now appear significantly improved, especially as it pertains to keeping pace on the scoreboard with the Chiefs, who won that 2019 AFC title bout in Kansas City.

STUDENTS OF THE GAME: Women moving in, moving up into NFL scouting jobs

Kyle Pitts: The No. 4 overall pick of this year’s draft, the Falcons rookie now stands to make much more of an impact on the field in 2021 given he’s likely to pick up the lion’s share of Jones’ vacated targets. Jones’ departure also means Atlanta now has the cap room to finalize the contract of Pitts and sign the other eight players it just drafted.

Derrick Henry and Ryan Tannehill: Henry, who’s won the NFL’s past two rushing crowns, should stand a better chance to win a third in 2021 given defenses will have to think hard about stacking the box to stop him at the risk of leaving Jones in man-to-man coverage. But whether Jones is single-, double- or triple-teamed, Tannehill will surely enjoy throwing to the best receiver he’s ever played with … and maybe getting a Pro Bowl nod himself in 2021 after feeling like he got snubbed last year.

NFC South: Much as the Falcons generally underachieved following their Super Bowl 51 meltdown – don’t blame Jones, who had four catches for 87 yards even as the Patriots tried to eliminate him – following the 2016 season, Atlanta was typically a tough out on the schedule. Even with Jones sidelined by injuries for seven games, the Falcons were only outscored by 18 points in 2020 despite a 4-12 record that left them in the division basement. But now that the Super Bowl champion Tampa Bay Buccaneers, New Orleans Saints and Carolina Panthers don’t have to design game plans to stop Jones, they should have far less trouble coping with a club that’s also breaking in a new coaching staff and front office.

Marcus Mariota jerseys: If you didn’t donate or recycle them just yet, Titans fans, you should probably continue to hold off. Despite heavily endorsing the idea of acquiring Jones, Tennessee Pro Bowler A.J. Brown did eventually admit he wouldn’t be giving up jersey No. 11 to the more-established wideout. Brown did suggest that Jones could go back to No. 8, which he wore at Alabama and could don again now that the NFL has relaxed its jersey numbering system moving forward. Mariota, Tannehill’s predecessor at quarterback, wore No. 8 for five season before signing with the Raiders in 2020. James Smith has it now, but the punter could surely be persuaded to surrender it to his new teammate.

Hayden Hurst: He’s been supplanted by Pitts as the Falcons’ primary tight end, Atlanta leaving no doubt after declining Hurst’s fifth-year option for 2022. But new coach Arthur Smith – coincidentally, his previous post was Titans offensive coordinator – loves to operate with two tight ends, and Jones’ absence means Hurst should also get more bites at the apple after a career-best season in 2020 (56 receptions for 571 yards and six TDs). No NFL player likes uncertainty, but at least Hurst should have a better opportunity to negotiate on the field as he heads into what is now a contract year.

Jon Robinson: Heading into his sixth season as the Titans’ general manager, he’s done a fine job revamping them from cellar-dweller to powerhouse – hiring coach Mike Vrabel, drafting Henry and Brown plus trading for Tannehill among his notable decisions. But Robinson has also had a few recent personnel whiffs, failing to re-sign All-Pro RT Jack Conklin prior to the 2020 season and exacerbating that decision by drafting Isaiah Wilson as a replacement … but the troubled first-rounder didn’t even last a year in Nashville before being waived. Tennessee seemed to be in the midst of another offseason of roster degradation, Robinson parting ways with DE Jadeveon Clowney, WR Corey Davis, TE Jonnu Smith, CB Malcolm Butler, WR Adam Humphries and CB Adoree’ Jackson, among others.

But acquiring Jones – while only surrendering a second- (2022) and fourth-rounder (2023) to do so – instantly restores belief the Titans can compete with anyone. Robinson isn’t done yet, given he has to fit Jones’ fully guaranteed $15.3 million base salary for 2021 under the salary cap even though Tennessee only has $3.4 million available, per Over The Cap. Details, details … and probably some phone calls to Tannehill, Henry, S Kevin Byard and/or LT Taylor Lewan, the team’s top-paid players, asking about contract restructures.

A.J. Brown, recruiter: The Titans’ leading receiver in each of his two NFL seasons, Brown was not shy in recent weeks about publicly trying to sway Jones on social media to come to Nashville. “Come on, bro. Come vibe with me, bro,” Brown told Jones in a direct message he shared. “You know I’m good for it.”

Brown also told Jones he could “carry the load” as Tennessee’s No. 1 receiver, “But if you get tired, you know definitely you know I’ll carry it, bro.” Brown did walk back an initial offer of that No. 11 jersey, partially because he realized his fallback – No. 1 – was retired in honor of Hall of Fame QB Warren Moon, who played when the franchise was based in Houston as the Oilers. But all in all, it appears Brown was pretty convincing – if nothing else, Robinson shared his sentiments.

Jones: In his final eight seasons, he’s been to the playoffs twice, including that bitter overtime defeat to New England in the Super Bowl defeat. Now 32, Jones said in his recent controversial interview with Fox Sports’ Shannon Sharpe: “I want to win.” He’s got a great chance to do that now.

Jones: His career average of 95.5 receiving yards per game is not only tops in league history, it’s nearly 10 yards clear of second-place Calvin Johnson (86.1 ypg), who was elected into the Pro Football Hall of Fame on the first ballot earlier this year. But that figure is likely to plummet in Tennessee. This offense has revolved around Henry the past two years, the All-Pro running back leading the NFL in carries both times while enjoying more than 700 touches. Jones averaged almost 162 targets in the six years preceding his injury-shortened 2020 campaign. Overall, he’s averaged 132 targets per season during his career, a figure no Tennessee player has surpassed since TE Delanie Walker had 133 in 2015. Still, if Jones really wants to win foremost, he won’t mind if his numbers suffer … too much.

A.J. Brown, receiver: He’s averaged 95 targets, 61 catches and 1,063 yards in his first two NFL seasons after being a second-round pick out of Ole Miss. Brown has already acknowledged his numbers will likely take a hit, probably precluding a Pro Bowl return for a few seasons. At least he appears to be in the proper headspace, more focused on victories than receptions. (Though if Tennessee struggles early, you wonder whether that diva syndrome that seems to afflict most wideouts will flare up for Brown … or Jones.)

Terry Fontenot and Arthur Smith: The Falcons’ new general manager and head coach, respectively, they’re off to a bit of a rocky start while navigating an unenviable situation neither created. Fontenot inherited a tattered salary cap which largely necessitated the belated trade of Jones after June 1, a date that allowed $15.5 million of the receiver’s $23.3 million dead-money charge to be deferred until 2022 rather than absorbed entirely this year. Smith, meanwhile, must recalibrate his offensive approach after losing his best player. Sadly, the circumstances of a trade that notably provides just that second-rounder next year in exchange for a likely first-ballot Hall of Famer probably won’t net a prospect anywhere near Jones’ caliber … and one not likely to cement Fontenot’s or Smith’s job status as they move forward.

Bills, Browns, Ravens: Or name your preferred AFC team hoping to take down the Chiefs, who have represented the conference in the past two Super Bowls. Buffalo, Cleveland and Baltimore were the AFC’s other playoff semifinalists in the 2020 season but, all things being equal, there’s a good chance at least one of them won’t return to that level in 2021 if the Titans live up to their heightened expectations.

Calvin Ridley: The Falcons receiver had a breakthrough 2020 season (when Jones missed nearly half the games), leading Atlanta with 90 catches for 1,374 yards and nine scores. Ridley seemed a likely candidate to be a first-time Pro Bowler in 2021 … but now he could be the first guy defenses bracket, more likely to put the pressure on a rookie like Pitts or less-gifted option such as Hurst or newly signed RB Mike Davis.

Indianapolis Colts, New England Patriots, San Francisco 49ers: Any of these clubs could have significantly benefited from the acquisition of Jones, who would have greatly enhanced their aspirations to contend in 2021 and beyond. All three could have much more easily taken on his contract than Tennessee and certainly had the draft capital to match the Titans’ winning bid. They say that sometimes the best trade is the one you don’t make … but in this case?

Matt Ryan: You gotta feel for the Falcons quarterback and 2016 league MVP as he enters his 14th season. It appeared he’d personally dodged a professional bullet and would have a fairly full deck in Year 1 under Smith after Fontenot chose Pitts rather than Ryan’s heir apparent with pick No. 4. But now Ryan bids adieu to Jones, of whom he recently said: “He’s probably impacted my career more significantly than any other player.”

Though he’s now 36, Ryan continues to play at a high level, leading the NFL in completions (407) and attempts (626) last season while passing for 4,581 yards and 26 TDs. But you wonder whether he is now in a situation similar to the one recently experienced by Matthew Stafford; playing out the string with his longtime team until his contract becomes more tradeable – which, in Ryan’s case, probably isn’t until next June … at the very earliest.