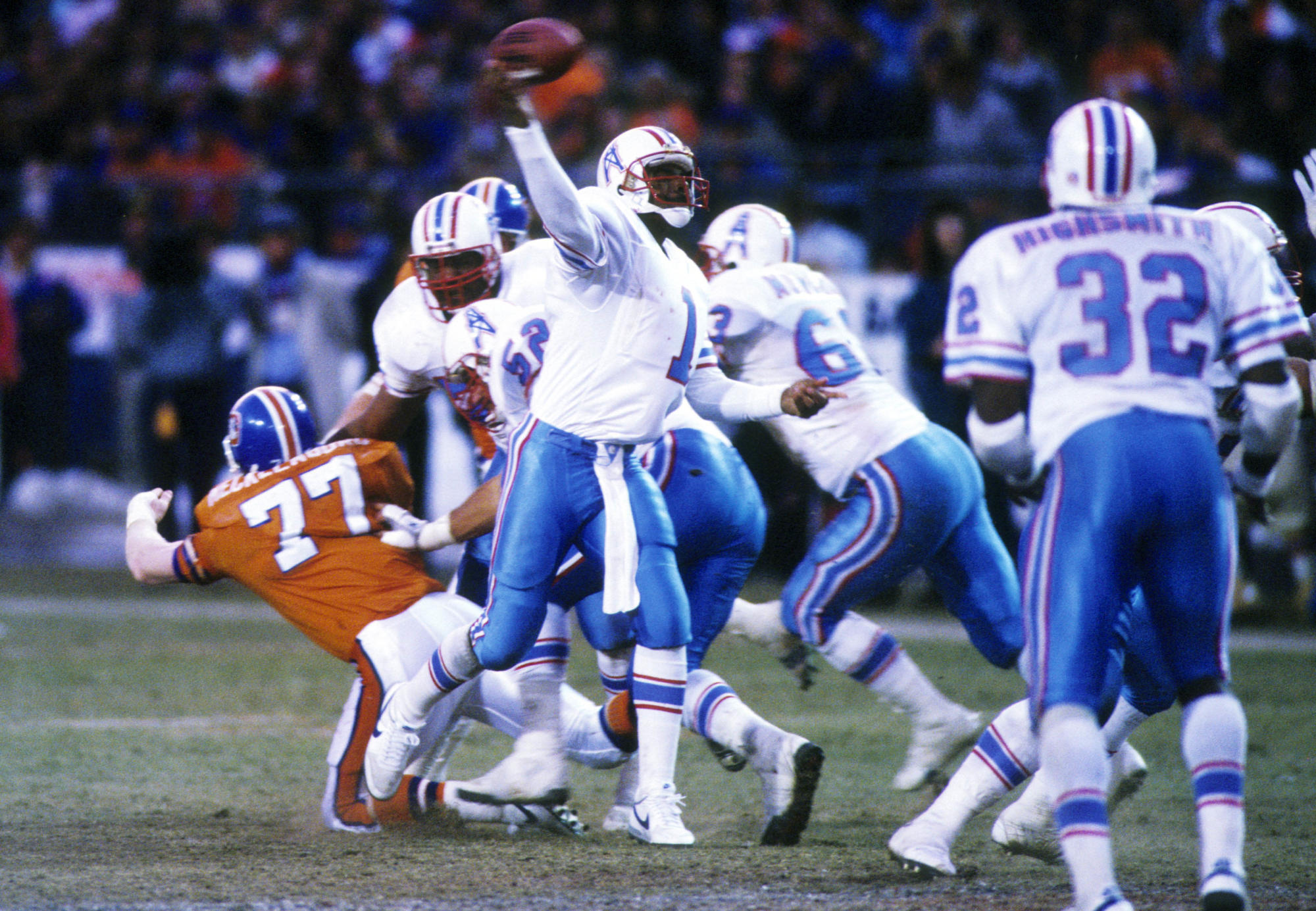 Despite three pretty decent seasons at Washington from 1975 through 1977, Warren Moon was not considered by any NFL team as a draftable quarterback in the 1978 selection process. Like most Black college quarterbacks at the time, he was told to either switch positions to something more “athletic.” or forget about it. So, Moon signed with the Edmonton Eskimos, playing up north through the 1983 season and winning five consecutive Grey Cups.

By 1984, the NFL had pulled its proverbial head out regarding Moon’s potential. Now, he was a highly-prized free agent, and wound up signing with the Houston Oilers (now the Tennessee Titans) to a contract that made him the NFL’s highest-paid player at that time. Moon struggled behind some really bad protection in his first few seasons, which led the Oilers to interview a new quarterbacks coach named June Jones in January, 1987. A former pro quarterback himself, Jones played for the Toronto Argonauts in 1982, so he was more than familiar with Moon’s excellence. Jones did help Moon to new heights… but it almost didn’t happen. By the time Jones was hired, the Oilers were ready to take their high-priced quarterback and move him out of town.

General manager Ladd Herzeg, who outbid the rest of the NFL for Moon’s services in the first place, and owner Bud Adams, who signed off on that deal in the second place, were prepared to transact.

“Ladd Herzeg was going to trade Warren to the Raiders,” Jones told me on the Touchdown Wire NFL Podcast this week. “I can remember, I had just come down from Canada a couple years earlier, and I had played against Warren. I knew him, and then I watched all the film from the three years that Hugh Campbell was at the Oilers, and Warren just got killed. I want to say… I think it was the last game of the year before I got there, Warren got sacked 15 times against the Cowboys (Note: it was actually Week 4 of the 1985 season, the Oilers lost 17-10 to the Cowboys, and Moon was sacked 12 times and threw four interceptions. Still, not good).

“And he got full-on helmet in the face on every throw. I mean, it was the most brutal ass-kicking I’d ever seen a quarterback take. I remember, they were saying, ‘He’s scared! He’s scared!’ And I said, ‘No wonder he’s scared — look at this film!’

“So, I talked Ladd into at least letting me work with him in the OTAs in the spring. I took Warren, and talked them into not trading him after OTAs, because [Herzeg] still wanted him out. I said, ‘Let’s go through the preseason, see how it goes, and then you can make your decision.’ I knew Warren was going to excel in what we did. I just knew it. He was so accurate with the ball, he got the ball out, and he now knew the progressions. And we had a really good football team. I want to say, we went from the worst in the league to making the playoffs [the 1987 Oilers went 9-6 in a strike-shortened season a year after finishing with a 5-11 record], and we were one of the top offensive teams in football over the next couple of years.”

Apparently, Herzeg had this on his mind for a while. In the April 26, 1986 edition of the New York Daily News, Paul Needell wrote about the Oilers potentially selecting Purdue quarterback Jim Everett in the 1986 draft, which Herzeg said wouldn’t happen.

“Houston GM Ladd Herzeg told QB Warren Moon not to worry, he won’t take Everett if the Oilers keep [the] third pick. Then why has he talked to Al Davis about Moon? Just asking.”

It’s a fair question. To Mike McAllister of the Austin American-Statesman, Herzeg was more expansive about this curious thought process.

“It simply says that we think Everett is an outstanding young prospect who our people feel is going to become an outstanding pro quarterback,” Herzeg said. “Warren is 30 years old, and you have to think about that. Plus. it’s hard to play in this league without two good quarterbacks on your roster. In the event that something happens to Warren, you have to have a good backup.”

Herzeg compared the situation to what the Chiefs did in 1983, selecting Todd Blackledge with the seventh overall pick in that draft despite Bill Kenney playing decently the year before. The timing of the Blackledge comparison was highly suspect — in the 1985 season, Blackledge completed 50% of his passes, and threw six touchdowns to 14 interceptions.

Blackledge was out of the league after the 1989 season, as was Herzeg. So, there’s that.

No doubt, every Oilers fan ever owes June Jones a refreshing beverage. In 1990 and 1991, Moon led the league in attempts, completions, passing yards, and in 1991, passing touchdowns. He really started to turn things around in the 1987 and 1988 with Jones as his quarterbacks coach, and Moon ended his NFL career with 3,988 completions in 6,823 attempts for 49,325 yards, 291 touchdowns, and 233 interceptions with the Oilers, Vikings, Chiefs, and Seahawks from 1984 through 2000.

Though he was robbed of five early NFL seasons because NFL executives were really, really dumb about Black quarterbacks in the 1970s, and through he just missed the hyper-prolific modern passing era, Moon to this day ranks 11th all-time in attempts, 12th in completions, 12th in passing yards, 14th in passing touchdowns, and 56th in Adjusted Net Yards per Pass Attempt. Moon was a slam-dunk first-ballot Hall of Famer, and if he’d been given the opportunity to play in the NFL when he left Washington before the 1977 season, one can only imagine his career numbers.

For the Raiders of the time, a trade for Moon would have presented quite the alternate history. In the transition of head coaches from Tom Flores to Mike Shanahan to Art Shell, the then-Los Angeles team cycled through league-average quarterbacks every season — Marc Wilson in 1987, Jay Schroder in 1988, Schroeder and Steve Beuerlein in 1989, back to Schroeder in 1990… and on and on.

The franchise generally put better-than-average defenses on the field, and had a running back corps led by Bo Jackson and Marcus Allen. Perhaps it wouldn’t have taken Tim Brown a full four seasons to come into his own as a future Hall-of-Famer. Can you imagine Moon in Mike Shanahan’s offense? Or, can you imagine the Raiders, in the late 1980s, with a Black head coach and a Black quarterback?