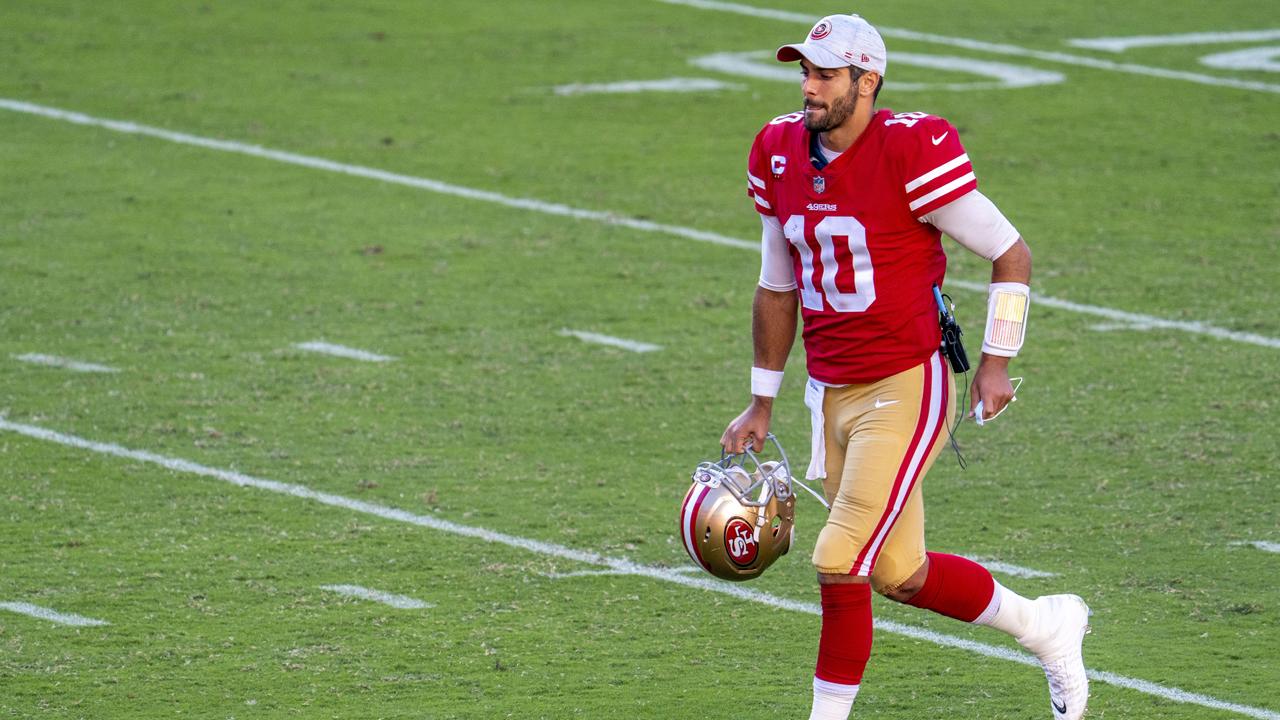 Perry: How Pats could move up in draft if Jimmy G is unavailable originally appeared on NBC Sports Boston

They’ve backed Jimmy Garoppolo publicly time and again this offseason, and there is logic behind what they’ve told ESPN’s Adam Schefter. Holding onto Garoppolo while the quarterback taken at No. 3 overall in this year’s draft sits and develops makes some sense.

What does that mean for the Patriots?

Let’s start here: The Patriots want to compete in 2021. If one needed any further indication beyond Bill Belichick’s 20-year tenure in New England, look at how he handled 2020, when he could’ve sold off valuable parts on his roster in order to improve draft position. Look at how he’s aggressively reshaped his team this offseason.

If he wants to compete, history would suggest he needs to up his investment at the game’s most important position. Outside of Case Keenum with the Vikings, Dak Prescott with the Cowboys and Derek Carr with the Raiders, no NFL team has made the postseason without a veteran starting quarterback on a market-value deal or a young quarterback playing on a first-round rookie contract.

If Garoppolo isn’t available for Belichick to make said upgrade, the Patriots could wait for players like Sam Darnold, Gardner Minshew, Teddy Bridgewater or Drew Lock to shake free depending on how the quarterback dominos fall around the draft.

While Patriots fans may jump at the opportunity to acquire Darnold as a free agent or Minshew in a trade for a mid-round pick, Belichick could argue that the above players would not represent what he sees as a significant upgrade over what he already has in Cam Newton.

That leaves the draft. But as we pointed out earlier on Friday, even that is no sure thing for Belichick. There are four teams — Atlanta (No. 4), Detroit (No. 7), Carolina (No. 8) and Denver (No. 9) — ahead of the Patriots (No. 15) in the draft order who could be in on the two remaining quarterbacks of this year’s top-five. Atlanta could sit and pick their next quarterback of the future. The rest could offer Atlanta a better package than the Patriots to trade up based on this year’s draft position.

But what if Atlanta, who just pushed some of Matt Ryan’s money into the future to save cap space in 2021, is out of the rookie quarterback market? What if that pick is up for sale and Belichick sees an opening to make a Niners-like move up the draft board to get whoever is left at quarterback after the first three go?

Based off the Rich Hill trade value chart, as would be expected, the Niners overpaid to make their jump Friday. If we consider future picks to be in the middle of the round not knowing how future seasons will play out, and if we make the universally-held NFL assumption that a pick one year in the future is docked one round in terms of trade chart points, San Francisco overpaid by about 30 points to jump nine slots.

In a hypothetical deal with the Falcons, an 11-pick jump for Belichick, one would imagine the Patriots would also have to overpay. Dealing away No. 15 overall, No. 96 overall (in the third round), a 2022 first and a 2023 first would result in an overpay of about 40 points to get to No. 4, per Hill’s trade value chart.

Worth it? If you’re asking me, yes.

Curran: Pats are letting the QB game come to them

In that scenario, the Patriots would end up with either Trey Lance, Justin Fields or Mac Jones. Lance or Fields have enough physical ability to go toe-to-toe with just about any first-round quarterback in each of the last three drafts. They are big, fast, strong-armed, and they played in offenses that asked them to make good reads in the pocket. Lance only has one full season under his belt, and it came against lower-end competition at North Dakota State. Fields has had issues holding onto the football for extended periods of time. Both would make for logical understudies to Cam Newton for a time — maybe not even a full season, necessarily — before taking over.

Either way, the Patriots would have hope for the future at the game’s most important position. And by 2022, they would have a well-constructed roster loaded with 2021 free agents able to prop up their young starting quarterback.

(If the Patriots lose a bidding war for No. 4, they could still ensure that they come away with one of the five best quarterbacks in this class by making another attempt to get up the board. If Denver, for example, lands No. 4 then the Patriots might be in competition with the Panthers for the last of the five consensus first-round passers. In that scenario, a trade with Detroit to No. 7 — one spot ahead of Carolina — might be necessary. Trading their 2022 first-rounder along with No. 15 would be about a 10-point overpay to make that jump, per Hill’s chart.)

No doubt, it would be a boatload of draft capital sacrificed to get from No. 15 to No. 4. But if Garoppolo is truly unavailable, it could be argued that is a more promising plan than pairing an about-to-be-supplanted veteran with Newton. And it would align more tightly with the aggressive, improve-at-all-costs approach the Patriots have taken in free agency this offseason.

Plus, it would take advantage of the team-building cheat code that is a quarterback on a rookie deal. Belichick spoke to that modern-game truth late last season.

With a rookie quarterback, teams have the resources to spend elsewhere, Belichick explained. Because the Patriots have already done their spending, in taking a rookie quarterback they would be taking the same path as a team like the Bills — who have built up the roster around Josh Allen, who is still on a rookie contract — but in reverse.

“But, that quarterback number is generally such a high number, if it’s a low number, it creates quite a bit of extra spending dollars. It’s an important component to the roster-building strategy… absolutely.”

Perry: What would it take for Pats to acquire Jimmy G via trade?

Belichick added: “The key, obviously, is to have a good player. So, there are some teams that have gone to free agency and put that money, invested that money into a free agent… as opposed to the rookies that are less expensive, but with the key being you have a productive player at the quarterback position. That’s the goal for every team. However that happens, then you work around it.”

The Niners are obviously hoping they will find a good player after handing over two years’ worth of first-round picks to Miami on Friday. The question now is whether or not Belichick would, for a roster that appears to be a quarterback away, find it palatable to take a like-minded approach.