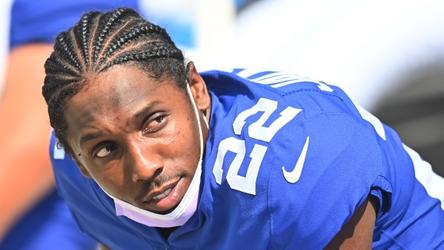 CB Adoree’ Jackson‘s status for Week 1 is in limbo after suffering a sprained ankle last week, which hasn’t publicly received a grade of severity. His signing has been billed as the perfect complement to James Bradberry on the other side of the line of scrimmage, but it might not come right away for New York.

If that is the case, the Giants don’t seem too worried about it. They have faith in their young corners on the depth chart.

The Giants do have some viable options. Which one they may choose is the question.

Rodarius Williams, the sixth-rounder out of Oklahoma State, did get reps with the starters in the final preseason game against the Patriots. He showed some solid coverage, and has been improving week by week on tape.

Defensive backs coach Jerome Henderson loves what he’s seen from Williams thus far, even when he fails because he learns quickly from mistakes.

“We are building those young guys to be ready to play,” he said. “At the corner position and at every position in this league, you’re going to lose guys to injury for a week, two weeks, multiple weeks. And that’s just part of the NFL with a 53-man roster.

“So right now, if we had to play today and Rodarius is out there, I feel like Rodarius is going to play his ass off. I think he’s going to be competitive, he’s going to make rookie mistakes and we’ll try to manage those in the situations we put him in.”

There’s also Josh Jackson, who the Giants acquired in a trade with the Green Bay Packers. Jackson has only spent a day with Big Blue, but has the most experience in terms of depth.

“The thing is he’s eager to learn, You know his past, his production in college and you like that. We’ll just have to get him in the mix when he gets healthy and see how he does.”

And then there’s Sam Beal, who surprised some by making the roster. Henderson said his physical tools are too intriguing to give up on despite barely playing for New York since joining the team two years ago.

“He’s got tremendous tools, and I think early in camp after being out of football for two years almost it was a lot for him,” Henderson explained. “I think as we went, he just got a little better everyday and worked harder every day. He doesn’t say two words but just kinda went out and worked and worked and got better. And with those physical traits and skills he has, he’s a guy that we’re hoping later in the year he’s going to play some quality snaps for us.

Could Darnay Holmes move from the slot to outside? What about Julian Love going back to cornerback?

No matter who goes there, Bradberry’s Pro Bowl status might mean the Broncos stay away and pick on whoever is opposite him.

But the secondary is arguably the deepest unit of any on the team, so whoever steps up — again, if Jackson can’t play — Graham doesn’t see it being an Achilles heel.

“I have confidence because I know this: Whoever’s down in whatever part of the season, the other team doesn’t care. So we have to prepare and get those guys ready,” he said.