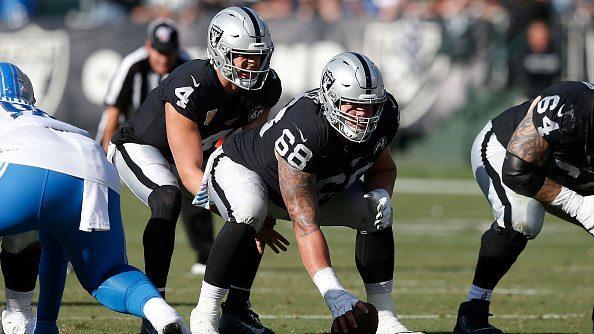 When the Raiders elected to transform their offensive line this offseason, the choice largely affected Derek Carr.

The quarterback had played behind Rodney Hudson — widely thought of as one of the league’s best centers — since 2015. After the club traded Hudson to Arizona, Andre James will take over that position. James doesn’t have much regular-season playing experience, but Carr still has comfort with the third-year pro out of UCLA.

“Really, during the season when Rodney would [not] practice on Wednesdays, I was with Andre anyway,” Carr said, via Paul Gutierrez of ESPN. “Andre started a game for us, and Andre is a good player. Obviously, time will tell for him, what he’s going to be. And he’ll let his play do that talking, but he’s a heck of a player and I’m excited about him.”

Las Vegas also traded guard Gabe Jackson — a member of Carr’s 2014 draft class — to Seattle and tackle Trent Brown to New England. Denzelle Good has been with the Raiders since 2018, starting 22 games in that time. He’s slated to replace Jackson. And Las Vegas selected Alabama tackle Alex Leatherwood in the first round to play right tackle, replacing Brown.

But the left side of the Raiders’ offensive line remained in tact with tackle Kolton Miller and guard Richie Incognito.

“Trust-wise, we’ve had a lot of injuries on our offensive line throughout the years, so I’ve played with a lot of these guys already,” Carr said. “It’s not like I’m looking at new faces that I’ve never seen before. I’ve played with these guys. Especially with the caliber of players they are. They’re really good football players and we have [offensive line] coach [Tom] Cable. He’s going to make sure we’re ready to play.”