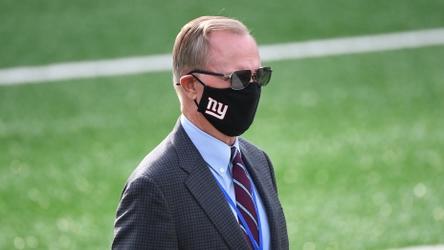 The Giants have been surprising in free agency thus far, and definitely in a good way if you’re a fan of the team. Money was spent, contracts were restructured to make cap room, and ultimately, the team got a lot better on paper.

Kenny Golladay is the crown jewel of them all, adding a No. 1 receiver to a team desperate for offensive playmakers not named Saquon Barkley. And then Adoree’ Jackson, the young corner from the Tennessee Titans, was brought in to be James Bradberry’s counterpart on the other side of the defense. Who’s to say the Giants won’t do even more before the NFL Draft?

But as of now, fans can be confident this Giants team will look different next season. Co-owner John Mara, though, is already thinking about the playoffs.

“I think our roster is good enough to make the playoffs,” Mara told the New York Post’s Ian O’Connor.

But it comes down to the man quarterbacking the team: Daniel Jones. Those who watch the game know teams start and stop with their signal caller. Mara is confident he can not only lead the Giants into the playoffs, but win a Super Bowl.

“Yes, he does,” Mara said when asked if Jones had it in him to win a title game. “I can say that without any hesitation.

“Every single one of our coaches loves the kid, and believes he has the talent to win a championship,” Mara said. “He really wants to be great, you can see that. … I believe the sky’s the limit with him.”

The Giants’ roster is much better now, but a Super Bowl right away may be stretching it. But these moves were certainly designed to get back into the playoffs – something Mara desperately wants for his team. They haven’t been since 2016 and haven’t won a game there since Super Bowl XLVI against the New England Patriots.

And that’s not to mention their biggest free agent priority: Re-signing Leonard Williams.

But the fact that the Giants have struggled so badly recently still baffles Mara. And the 2018 offseason, the first year of Gettleman’s contract, still haunts him. It’s definitely gotten better since then.

“We made some miscalculations, to put it mildly, back in 2018, and to a certain extent we’re still paying the price for some of those errors,” Mara explained. “But our personnel decisions improved a bit in 2019 and then significantly last year. I think the combination of Joe and Dave works.”

Will all of these combinations lead to a playoff berth to break the Giants’ drought? Time will tell. But there is no doubt Mara and the Giants have set themselves up to take the next step. Or to put it better, a step back into the playoffs.

“I’d be very disappointed if things don’t turn around quickly. … I’m starting to get impatient. It’s been a while,” he said.