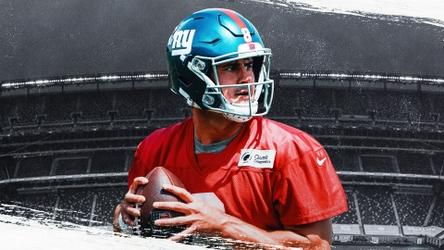 We’ll highlight those players for the Giants, this time with QB Daniel Jones…

Well, Jones isn’t fighting for his spot on the team as we all know. He’s the team’s QB1 and that’s not changing with Mike Glennon as his backup now.

But… Year 3 could be a career-altering one depending on how he performs.

The Giants kept OC Jason Garrett in place so Jones doesn’t have to go through his third offense in three seasons. Familiarity with the system entering training camp was a priority so that Jones can hit the ground running come Week 1.

What happens if the results aren’t there at the end of the day, though? Co-owner John Mara was quite direct when he said after the season that he’s sick of not being in the playoffs and looking ahead to next year. Jones does have two years of team control after 2021 (fifth-year option available as a first-rounder), but the Giants could become impatient depending on his play.

All of the talk from head coach Joe Judge and GM Dave Gettleman praises Jones’ work ethic, drive and preparation. But on-field production is all that matters in the end.

With the offense being one of the worst in the NFL last season, the Giants’ success will go as Jones goes this season. The pressure on Jones will the most it’s ever been.

There were a lot of factors that resulted in the Giants’ lack of points last season, not just Jones’ play. Receivers couldn’t get open, the offensive line was still porous and Garrett deserves some blame for his play-calling, too.

But if there is one thing that didn’t take a turn the way the Giants hoped for in 2020, it was Jones’ turnover problem. He had 10 interceptions and 11 fumbles after totaling 18 fumbles and 12 picks in 2019.

Though some interceptions can be pinned on receivers, the fumble issue wasn’t eradicated. It was less than his rookie year, but still something that had many shaking their heads.

If Jones can’t fix that problem in his third season, and if you add in bad results, the Giants will need to reconsider what their future with Jones looks like. Quarterback hell is what Gettleman is trying to avoid, but more of the same from Jones may result in just that.

Productive drives. Scoring touchdowns. Winning games due to offense and not dominant defense. Literally anything of that nature will have Jones going into his fourth season with Big Blue.

For the Giants to reach their potential this season, Jones and Garrett will have to be on the same page. They have the weapons in the pass and run game. The offensive line is banking on better chemistry after a full season together. And Jones has two full years of experience to know how fast the game is played. The excuses are all gone.

And Jones probably realizes that. He has shown some tremendous play-making ability, both with his cannon arm and his legs. He just needs to be consistent throughout the season, and the Giants will surely then recognize he is their guy. The faith is already there that he is and will remain that guy for years to come, too.

Year 3 is always the leap year and the one scouts and coaches alike look for in players. Jones is a prime candidate to do that this year. He just needs to stay consistent.