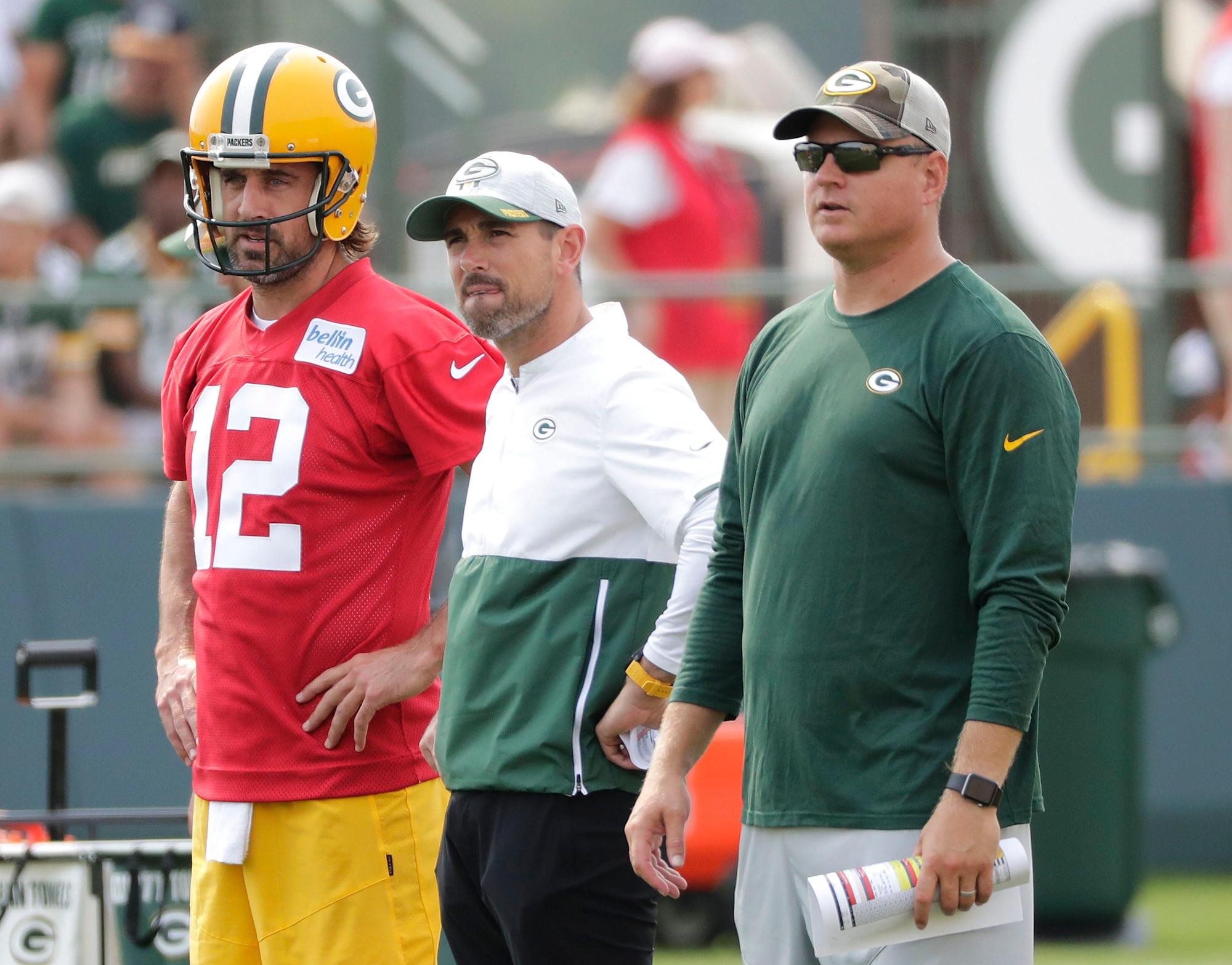 GREEN BAY, Wis. — Based on the way Packers general manager Brian Gutekunst and vice president of finance Russ Ball have managed the offseason, it’s hard to argue that they aren’t all-in on the 2021 season.

The only maneuver left was finding a way to placate quarterback Aaron Rodgers so that the commitment to retaining their own players and the risky salary-cap moves they made leading up to this season would all be worth it.

After agreeing to include Rodgers on some of their decision-making, promising to discuss his long-term future after the season, voiding the final year of his contract and bringing back his buddy Randall Cobb via a trade with the Houston Texans, the Packers managed to make themselves whole again.

Rodgers might not have a warm feeling about the front office or the organization, but he swore Wednesday that he is invested in this season, which very well could be his last with the Packers. He made it clear that his competitive fire still burns and that it would carry him through his 17th season.

Given the number of contracts the Packers have restructured to allow them to re-sign players such as David Bakhtiari, Kenny Clark, Aaron Jones, Marcedes Lewis, Kevin King, Robert Tonyan and Tyler Lancaster and add veteran free agents such as inside linebacker De’Vondre Campbell and tackle Dennis Kelly, they could face salary-cap purgatory next year.

Thus, there is an all-in feeling to this season.

“I mean, we’ve pushed it to the limit about as far as we can push it,” Gutekunst said. “I really like our football team; keeping it together as much as we could I thought was really, really important.

“Depending on kind of where the salary cap goes, there’s going to be some future pain as we move forward to try to do what we did for this season. There’s no doubt about it. I mean, we’re always all in, but this year there are certainly some decisions we made that maybe we wouldn’t have in the past because we see what’s out there for us.”

The addition of Cobb will not only cost the Packers a sixth-round pick, but it will eat up a chunk of the $5 million in salary-cap room they have left this season. It will take another restructure with Rodgers — which pushes even more cap charge down the road — to get into a place where the front office can deal with things that normally pop up during the regular season.

However deep the grievances Rodgers has with the Packers go, there weren’t many options for him to get out from under the final three years of the four-year, $134 million extension he signed in 2018. He could have sat out the year or he could retire.

It’s why Gutekunst said Wednesday morning before the players hit the field for their first training camp practice that he felt all along Rodgers would be their quarterback this season. He said he was confident the Packers could revive their relationship with Rodgers, although in his post-practice news conference the quarterback didn’t seem to think much is different, especially when it comes to his long-term future with the organization.

“I think those things in that direction, haven’t really changed at all,” Rodgers said. “I think I’m just going to focus on this year. There’s a lot of moving pieces besides myself, expiring contracts for a number of guys. So, there’s going to be a lot of tough decisions at the end of the year. I’m just going to enjoy this year and then revisit that conversation at the end of the season.”

How much the offseason will affect the team chemistry remains to be seen, but Gutekunst and coach Matt LaFleur feel the locker room is strong enough to handle it. Most players realize there’s a harsh business reality to playing football and have enough to handle with their own future, let alone someone else’s.

On Wednesday, it was back to football.

“There’s a lot of distractions in the offseason,” Gutekunst said. “But I really do believe in the guys in that locker room. I think we’ve got some really strong leaders and, it’s like a lot of things when there’s all this noise, but then when the games start, the practices start, you start preparing for a season.

“I think professional football players know how to turn the page and move forward. And that’s what I expect of all of them.”

With Rodgers leading way, LaFleur likes makeup of his team

As for Rodgers, LaFleur had no reason to believe his quarterback wouldn’t be focused on football.

“I have no doubts,” he said. “He is the most competitive person I’ve ever been around, so there’s no doubt about it that he is going to go out and play to the highest of his ability.”

LaFleur remains excited about a team that returns all but one starter (center Corey Linsley) from a team that went to back-to-back NFC championship games. Gutekunst’s draft class features three players — cornerback Eric Stokes, center Josh Myers and receiver Amari Rodgers — who are already seeing full or partial time with the No. 1 units.

He hired defensive coordinator Joe Barry to replace Mike Pettine and promoted Maurice Drayton to special teams coach to replace Shawn Mennenga in an attempt to push those units to a championship level.

There are a lot of pieces around Rodgers.

“With him, we feel like the sky is the limit,” LaFleur said.

Gutekunst says Rodgers has ‘seat at the table’

The challenge for Gutekunst will be to keep lines of communication open with Rodgers so that their relationship doesn’t go sour. Rodgers denied that his displeasure stems from Gutekunst’s decision to pick quarterback Jordan Love in the first round of the 2020 draft, but it’s hard to imagine it’s not part of the equation.

Gutekunst, who described his relationship with Rodgers as “professional,” can’t take back the pick and trading Love would show weakness, so his only option is to make Rodgers feel welcome and see where this thing goes.

“I think winning is the most important thing, right?” Gutekunst said. “I mean, that’s the No. 1 thing. And with the communication part, I think when we make decisions, whether it’s personnel, whether it’s Matt and his coaching staff, whether it’s (team president) Mark (Murphy) and some of the things he’s doing, I think, there’s a lot of opinions. There’s a lot of different angles.

The future is so uncertain that it’s Super Bowl or bust for the Packers. It’s the only way you can look at it from the current lens.