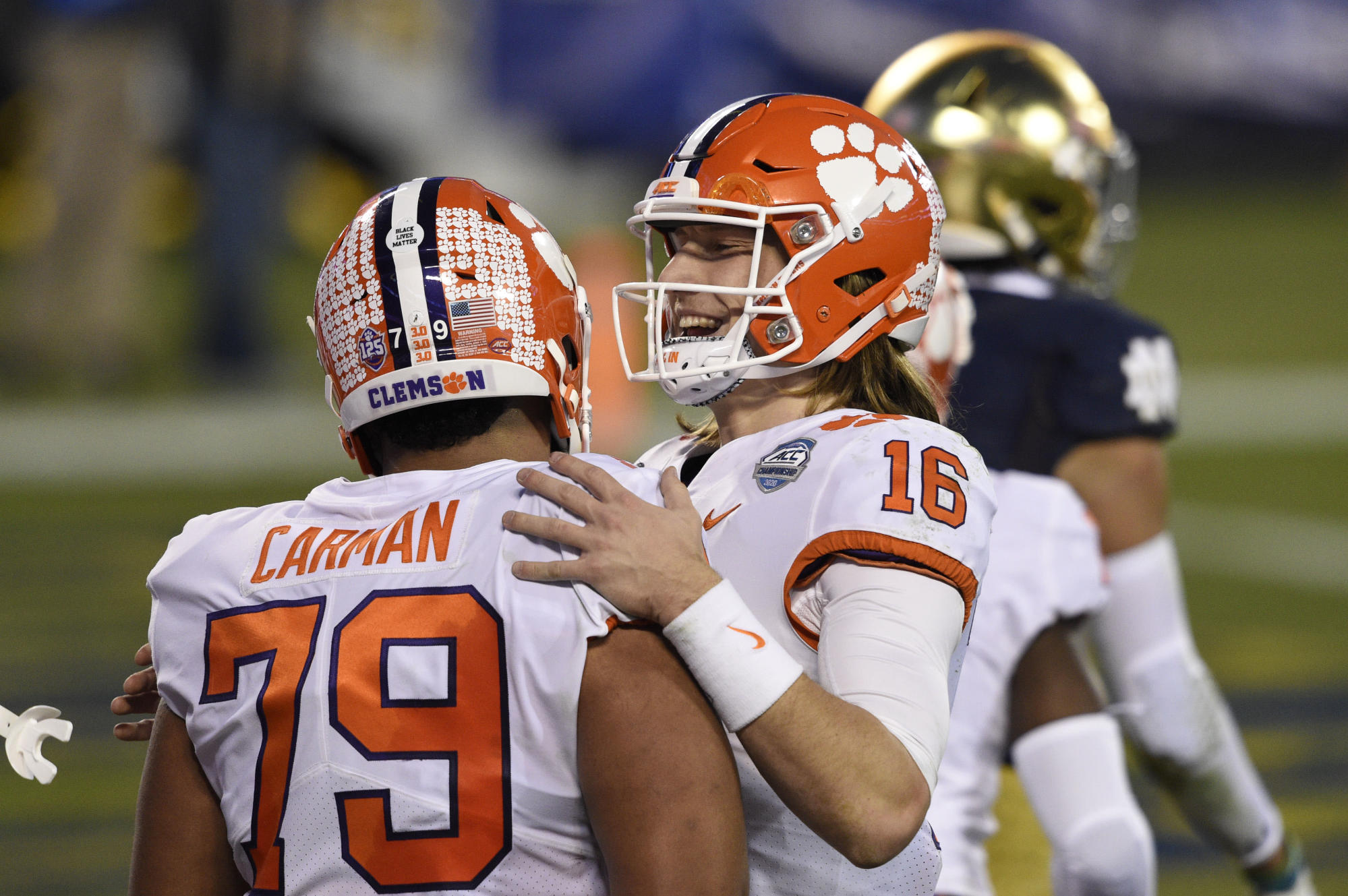 The 2021 NFL Draft is just over two weeks away and anticipation for the annual event couldn’t be higher. While fans of the Jacksonville Jaguars are pretty certain of what will happen with the first overall selection, figuring out what the Jags could do with their other nine selections has been stressful, yet fun.

With our last mock being posted three weeks ago, we took another crack at putting together a mock that would set the Jags up well heading into camp using Pro Football Focus’ simulator. Here are the results we came away with in a seven-round scenario:

When asked if the team was going to draft Trevor Lawrence with the No. 1 pick, Urban Meyer said the following to Peter King: “I’d have to say that’s the direction we’re going. I’ll leave that up to the owner when we make that decision official. But I’m certainly not stepping out of line that that’s certainly the direction we’re headed.” Jags owner Shad Khan stressed the importance of getting a franchise quarterback in his first postseason press conference for the 2020 season, while most believe Urban Meyer came out of retirement just to coach Lawrence. That’s all that needs to be said.

There was a trend that fans took notice of in free agency where the Jags mostly stuck to acquiring players who their coaches were familiar with. Look for that trend to continue in the draft in some form. The Jags’ secondary coach, Chris Ash, coached edge rusher Joseph Ossai when he was a defensive coordinator at Texas. At his pro day (which went well), Ossai praised Ash, so they enjoyed their time together. Ossai is an athletic pass rusher who has a knack for causing turnovers, and with Christian Barmore and Trevon Moehrig off the board, why not get a player the team is familiar with that has late Round 1 grades?

This is another pick where there isn’t much to be said. The Jags weren’t able to get a receiving threat at tight end in free agency, and the room doesn’t look all that strong as a result. sticking with the trend of acquiring players they know, this is a spot where fans could see the Jags take Pat Freiermuth, who was coached by Jags tight ends coach Tyler Bowen in college. Freiermuth is a player who would offer Lawrence a big target with YAC ability. He’s also proven to be solid in catching the ball in traffic, which could get him a long way in the NFL.

As we discussed earlier this week with former Jags running back Maurice Jones-Drew (listen below), Oregon’s Jevon Holland has proven to be pretty versatile. That could catch the eyes of Jags defensive coordinator Joe Cullen. While Cullen is a first-time NFL defensive coordinator, he’ll probably be looking to duplicate a scheme like that of the Baltimore Ravens, who he previously was the defensive line coach for. https://twitter.com/BleavInJagsPod/status/1381356133722566663?s=20 While Cullen was there, the Ravens moved their defensive backs around and valued versatility. That’s exactly what could draw him to Holland, who some feel could make the move to cornerback (due to his ball skills) if asked.

Clemson offensive tacle Jackson Carman (79) played 100 snaps in the Notre Dame game, and Tigers coaches acknowledge that may be too much.
Clemson The Citadel Ncaa Football

The first and second rounds may be a little early for the Jags to take an offensive tackle as they have starters in place for 2021. Cam Robinson is playing on the franchise tag (worth over $13.7 million), so there is no way he’s not starting this upcoming season. Jawaan Taylor was just drafted in the second round in 2019, and while he’s struggled, it’s simply too early to give up on such a high selection. However, if both or either player doesn’t play well in 2021, it would be simply time to move on. That said, the Jags probably should take advantage of this deep tackle class and get a prospect around the third round, then figure the rest out later. Jackson Carman admittedly isn’t the easiest evaluation, but he’s been projected to go anywhere from the back half of the second round to the middle of the third round. As Lawrence’s protector on the blindside in college, Carman displayed superb power and strong hands. However, some feel he may be better suited for guard, and if that’s the case, the Jags could still use him with starters A.J. Cann and Andrew Norwell set to become free agents in 2022. Like Freiermuth and Ossai, the Jags’ staff is somewhat familiar with Carman. Urban Meyer and the Ohio State Buckeyes tried to recruit the Ohio native, however, he ended up going to Clemson to join Dabo Swinney

Unfortunately for the Jags, Tyson Alualu decided to return to the Pittsburgh Steelers, but when considering it was to avoid having to relocate his family, it’s understandable. However, with him being one of the top additions of the Jags’ free agency class, they could look for a player who can do similar things in the draft. From that standpoint, Marlon Tuipulotu is a player with a Day 3 grade who could help bolster the defensive line. With a high motor and some serious power packed within his 6-foot-1, 308-pound frame, some were impressed with him at the Senior Bowl and believe this is right about where he could come off the board.

The Jags came out of free agency fine at cornerback, signing Shaq Griffin and bringing back Tre Herndon and Sidney Jones IV. However, Gowan, who the Jags have met with, marked good value here as PFF’s No. 5 rated cornerback and the best available player remaining in this particular simulation. Gowan was a member of Central Florida’s loaded secondary that included notables Richie Grant and Aaron Robinson. Despite that, he also shined and allowed just 25 yards or fewer in nine of the 12 games he played in. To me, that sounds like a player with big-time potential.

145.) WR Shi Smith, South Carolina – Smith is another Senior Bowl standout who displayed his speed, footwork, and suddenness in Mobile. He could be a designated slot receiver for the Jags, adding to an already talented group. 170.) RB Javian Hawkins, Louisville – Meyer has said he wants to build the running back room around James Robinson. He did that by signing the team a No. 2 and a former player of his in Carlos Hyde. Now, look for the Jags to add a speed threat at tailback, which Hawkins is, to make the group well-rounded. 249.) DL Austin Faoliu, Oregon – Why not end the draft by getting a developmental defensive lineman like Faoliu? According to Pro Football Network’s draft analyst Ian Cummings, Faoliu is a versatile player who can play anywhere from the one technique position to the five.