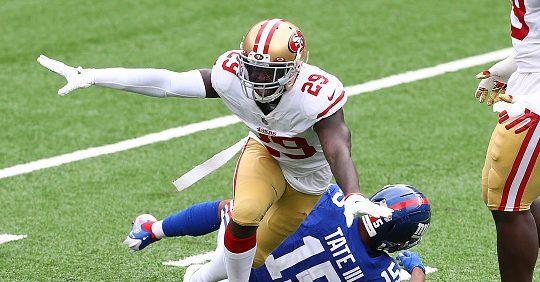 Safety Jaquiski Tartt ended last season on injured reserve after tearing a ligament in the big toe on his right foot in a Nov. 5 game. He required surgery to repair the injury.

“At this point, I’m doing well,” Tartt said Monday after re-signing with the 49ers on a one-year contract, via Matt Maiocco of NBC Sports Bay Area. “Surgery went well. Rebab’s been going well.

“But when it happened, I thought I’d probably miss a game or two, and to get the news that it was a Grade 3, it was tough for me.”

Tartt, 29, has played only 36 of the 49ers past 64 regular-season games because of injuries. That’s why Tartt thought maybe the 49ers wouldn’t re-sign him after six seasons in San Francisco.

“I was up in the air,” Tartt said. “I wasn’t sure because of me coming off the injury. I wasn’t sure they’d want me back here or not. They did. That was a good thing for me. I felt like I left a lot on the field last year so I’m glad to be back here.”

Tartt has started 50 games in his career and will compete for the starting job alongside Jimmie Ward. The 49ers signed Tavon Wilson and also have Tarvarius Moore and Marcell Harris at the position.