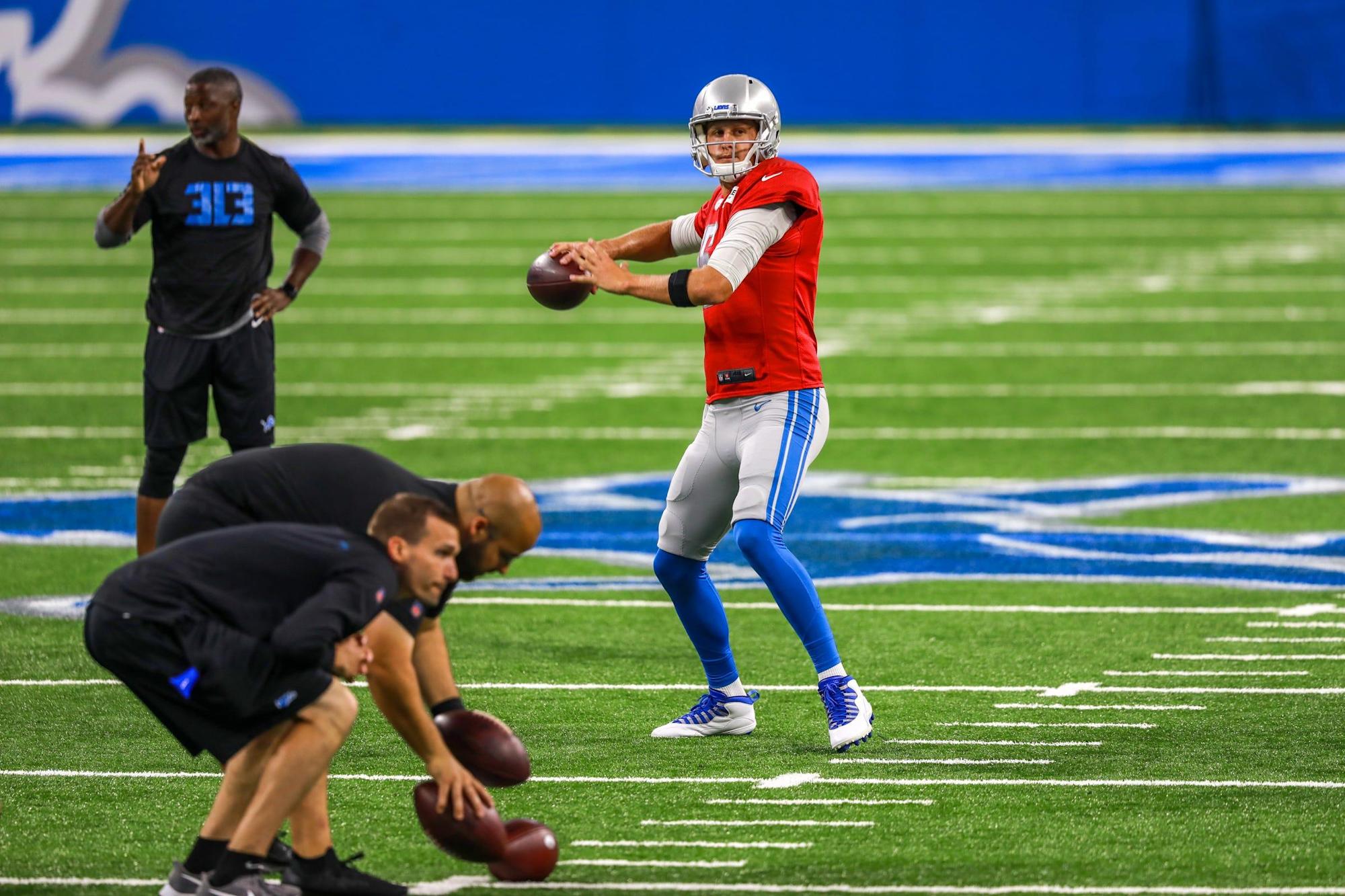 Detroit Lions quarterback Jared Goff rolled to the right, scanned his options and fired the ball to tight end T.J. Hockenson in the back of the end zone.

The Goff-Hockenson connection for a 6-yard score occurred in Saturday’s 11-on-11 scrimmage at Ford Field, where fans showed up to watch the Lions prepare for their first preseason game Friday against the Buffalo Bills. The completion capped a strong first possession, in which Goff completed all five of his passes.

“We have a pretty good feel of Hockenson,” Lions coach Dan Campbell said. “He’s shown up once again.”

FROM CANTON: For Megatron, Pro Football Hall of Fame induction ‘like a dream come true’

LOVE FOR HOCK: Veteran TE calls TJ Hockenson ‘one of the top’ in NFL

The Lions held Saturday’s practice without wide receivers Tyrell Williams, Breshad Perriman and Quintez Cephus. Williams is dealing with a tight groin, but Campbell isn’t concerned. Perriman has a hip injury, and Cephus “bumped his head” in Friday’s practice.

But Goff made something clear: He trusts Hockenson and fellow tight end Darren Fells. Before Hockenson’s touchdown, Fells caught a 25-yard pass to enter the red zone. Goff added two more touchdowns, an 8-yard pass to St. Brown and a 5-yard completion to Hockenson.

“It does make you feel good,” Campbell said about his tight ends. “Sometimes, the perception is you don’t have a certain area, or maybe they’re just having a bad day. Whatever that is, you know you got the tight ends. That’s something to feel pretty good about.”

BIG V: Why Halapoulivaati Vaitai is ‘super-excited’ for Penei Sewell, Year 2 with Lions

“I always told coach we can play with five tight ends out there if we need to,” Fells said. “Everybody in that room is extremely talented and can make plays when they’re called upon. When someone else goes down, I feel like that group can step up.”

• Barnes and Brown attended practice but didn’t suit up in pads. Reeves-Maybin, who has been on the reserve/COVID-19 list since late July, was on the field, wearing his jersey and a face mask. He seems set to return soon.

• Running back D’Andre Swift didn’t compete in the scrimmage. Jamaal Williams, the team’s No. 2 back, took reps with the first team, and Jermar Jefferson — seventh-round pick in the 2021 draft from Oregon State — helped out the second-team offense.

• Kickers Randy Bullock and Matthew Wright went 0-for-4 on field goals beyond 45 yards. “Bullock’s been kicking it well to this point. Yeah, he had a rough one today,” Campbell said. “Let’s see how we correct it. This is not going to be a knee-jerk reaction from me right now. It’s way too soon. But certainly, he would be the first one to tell you he needs to kick better.”

• Outside linebacker Robert McCray departed from practice before the rest of the team. He had been involved in a scuffle with offensive tackle Taylor Decker. “We’ll just check in and see what’s up,” Campbell said. “That wasn’t pulling him out. Certainly, that’s not what we want, and that will be addressed.”

• Campbell got the fans fired up with his pre-practice speech: “I want you to envision right now that we’re all in the backyard, because Ford Field is our backyard, and we’ve got our fire pit in the backyard. We got our beer, we got our hotdogs, we got our wine. The kids got the marshmallows ready to go. Let me tell you something. We’re going to bring the firewood, and we’re going to light the fire. At some point, it gets late in the night, man, and you really want to see how high we can get this thing to burn. You’ll douse it with gasoline. That’s what we need from you.”