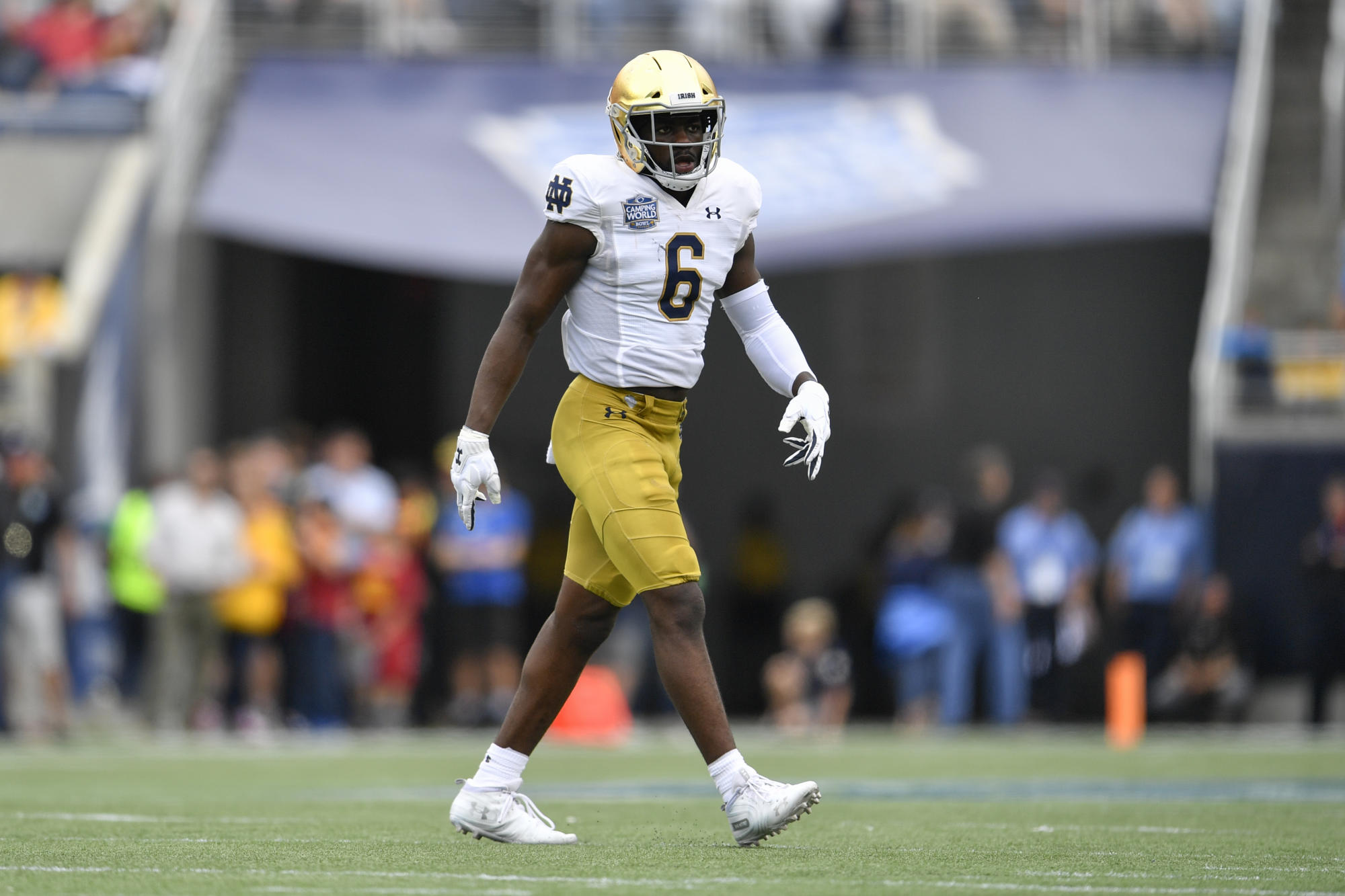 The skinny: A 3-star Rivals recruit, Owusu-Koramoah flipped on his commitment to Virginia and went to Notre Dame. He redshirted in 2017 (at age 17) and played only special teams in two games in 2018 but didn’t record any statistics. In 2019, Owusu-Koramoah stepped into a starting role (13 games) and made 80 tackles (13.5 for losses), 5.5 sacks, four passes defended, two forced fumbles and two recoveries. He was named the Butkus Award Winner (best linebacker) and ACC Defensive Player of the Year in 2020, logging 62 tackles (11 for losses), one sack, three forced fumbles, two recoveries, one interception and three pass breakups in 12 starts. After the season, he declared early for the 2021 NFL draft.

Upside: Fast, rangy defender who can cover a lot of grass. Played out in space on the “field” side predominantly to take advantage of his work in space. Lightning-quick trigger — ideal reaction time to break on the ball or adjust to the action up front.

Explosive athleticism. Pro-day testing offered a glimpse of that — a 37-inch vertical jump and a 124-inch broad jump. Also reportedly has been tracked hitting 20.4 mph on the field via GPS, can rip off 42 unbroken pull-ups and can back-squat 555 pounds.

Rare versatility was demonstrated in Notre Dame’s “rover” role. Covered the slot extensively — even vs. wide receivers, not just backs and tight ends. Did work in the box as a stacked linebacker and overhang defender, asked to blitz and even logged snaps at wide corner and deep safety occasionally. Shows some real juice as a blitzer who can get home with shocking frequency (see three-sack game vs. Iowa State). A true mismatch defender who can man multiple spots.

Coverage ability should be one of his calling cards. Mirrors big and small targets well and can carry them pretty well. Nice awareness and comfort in zone drops. Well-versed in man coverage — can even line up in press, flip his hips and run. Fits the modern NFL game and prevents subbing out defenders vs. tempo.

Fast closer who flies in like a missile. Drives through the ball and can blow up screens, draws and backside runs with his pursuit ability. Hits with force and bad intentions. Disruptor — five forced fumbles and 24.5 tackles for loss in two seasons of starting.

Selfless player — will blow up block attempts that open up tackle opportunities for his teammates. Improved at slipping blocks and sorting through the trash. Innate nose for finding the ball.

Downside: Small frame for a linebacker. Was 188 pounds in high school, 198 when he arrived on campus and might now be maxed out at around 220. Decent overall length (33-inch arms) but unusually small hands (8 7/8 inches). Mild durability concerns — missed a big chunk of his redshirt freshman year with a foot injury.

Role and fit will be crucial for his development. Sort of a tweener. Spent most of his time in the slot the past two seasons (more than half his snaps) and might not be able to mirror the NFL’s quickest inside receivers. Likely won’t be able to thrive a large portion in the box. Hybrid defenders are all the rage now, but they don’t always make seamless, immediate transitions.

Still learning to disengage from blocks. Lacks the kind of power or take-on strength you’d typically find in a box defender. Not a stack-and-shed player by any means. Made a lot of unblocked plays that might not be there at the next level. Best when playing more freely in space to roam.

Hyper-aggressive player who will whiff on some tackles (see the first Clemson game in 2020). Allows ball carriers to slip through his arms. Takes some wild angles to the ball and will grasp air. Attacks too high at times and misses the ideal target zone. Comes in too hot and can’t break down.

Loses discipline at times and can play a bit too frenetically. Could add a dose of control and discipline to his game — gets jumpy and guesses too much. Alabama took him out of the game with a steady diet of RPOs — sort of caught him in no man’s land.

Allowed a lot of catches in coverage. Gave up too many yards after the catch. Only one career interception. Racked up a lot of tackles downfield.

Best-suited destination: Owusu-Koramoah’s projection will be really interesting. On the one hand, NFL teams love chess-piece defenders who can handle a variety of roles and offer scheme flexibility without having to substitute. But on the other, those transitions aren’t always overnight successes.

We still believe that he should be able to carve out a role as a box safety and big-nickel defender who can blitz, cover backs and tight ends readily and make rangy plays with his athleticism and pursuit ability. But it just might take some time for that to be fully realized.

Did you know: Owusu-Koramoah — also known as “Wu” and “JOK” for short — was also a fine basketball player at Bethel High School in Hampton, Va., playing alongside his older brother, Josh, for two years. Jeremiah helped his team to the 5A state title and earned all-state mention. He even became friends with Bethel’s most famous alum, Allen Iverson, and received multiple hoops scholarship offers (VMI and Maryland-Eastern Shore).

Player comp: In the Derwin James or Malcolm Jenkins mold, although less as a deep safety.