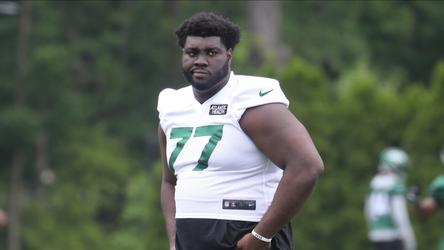 Following their final preseason game of the new year, the Jets have two weeks before they kick off their season in Carolina against the Panthers. And while their roster is a tad banged up, Robert Saleh is confident those two weeks will make sure most of those guys are available for his squad on gameday.

Left tackle Mekhi Becton and wideout Denzel Mims are two of a few players that Saleh told reporters should be good to go Week 1.

Becton has been dealing with a concussion he suffered while at practice. Also, Mims is working himself back since his food poisoning incident earlier this offseason that has him playing catch-up.

Also on offense, RB La’Mical Perine, the Florida product the Jets took last season, should be good to go for Mike LaFleur‘s running back by committee plan Week 1. Michael Carter, a rookie out of UNC, and Tevin Coleman should be the guys in the backfield. Ty Johnson is another option as well.

On defense, S Lamarcus Joyner is another player that should be back healthy. In Saleh’s zone scheme, Joyner could do very well at that position despite playing nickel corner with the Las Vegas Raiders.

Finally, CB Brandin Echols is the final player Saleh mentioned as being someone to expect ready for Week 1.