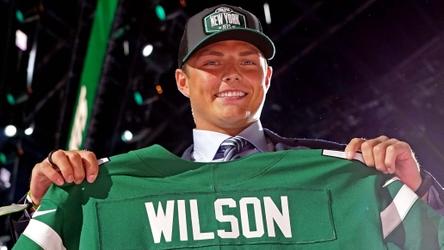 The bar was set very low, since it’s hard to imagine the Jets being worse than they were a year ago. The Jets were starting basically from scratch in their attempt to put a better team around their newest quarterback of the future.

That’s clearly what this offseason was about: Do whatever is necessary to give Zach Wilson the tools for success. They spent a lot of money in free agency and used their first four draft picks on offensive players, and still had a little leftover to boost their defense, too.

But did it work? It seems clear there’s more talent around Wilson than there ever was around Sam Darnold. But how much better are the Jets, really? And will they see the results this year?

Here’s a position-by-position look to see where the Jets have improved, and whether they really will be a better team:

Time will tell, of course, but in three years Darnold never really looked like the franchise quarterback he was expected to be. Surely the lack of talent around him, the bad coaching and the injuries hurt, but he had his own turnover issues, too. Wilson is a fresh start, and as highly regarded as Darnold was three years ago, if not more.

Better or not?: TBD

Injuries left the Jets with a bunch of nobodies at receiver a year ago and no true No. 1 receiver. Even Denzel Mims only made it through eight games. Now they’ve got a No. 1 in Davis, some real promise in Cole, and Moore might be the most dangerous and explosive receiver on their roster. Even better, they’ve got depth. They won’t have to start Braxton Berrios and Jeff Smith, or try to find a Chris Hogan on waivers. With Davis, Cole, Moore, Mims, and Jamison Crowder, they’ve got enough.

Better or not?: It’s potentially the best receiving corps they’ve had in years.

The Jets are returning most of the starting lineup from a year ago, though Vera-Tucker is likely to replace Alex Lewis at left guard. On the surface, that’s not a good thing given how bad the line was in 2020. But that was also an injury-ravaged group. Maybe with better health there’ll be improvement. Adding Feeney gives them better depth, which will help. And Mekhi Becton and Vera-Tucker gives them a potentially powerful left side. There’s still work to do here, though.

Better or not?: Marginally, but if they stay healthy they may be on to something.

The Jets love that Carter was still available for them in the fourth round, and they’re high on what Coleman can do as long as he’s healthy. The other part of what will surely be a committee approach is La’Mical Perine, and it’s hard to tell what to expect from him after an injury-prone rookie year. The Jets won’t have ageless, tireless Frank Gore as a security blanket anymore. But the Jets are comfortable with what they have, especially since this offensive scheme tended to get great production out of plug-and-play backs in San Francisco.

Better or not?: There may be no Gore-like workhorse here, but there are fresher legs and there is definitely more explosive, versatile potential.

The veteran Kroft really just adds depth to this position. It’s still the Chris Herndon show, with backup from Ryan Griffin. It’s a little odd, given what everyone has seen of Herndon, that the Jets didn’t address this position more aggressively in the offseason, especially with all of the cap space and draft picks they had. That sure signals that the coaching staff sees something they like in Herndon. It’s anybody’s guess what that is.

Better or not?: No, not really.

Just a hunch, but Robert Saleh isn’t done tinkering with this defensive line yet, given how important it was to his defense in San Francisco. The addition of Lawson and Curry gives him a much better pass rush than the Jets had last year, though, and Rankins and maybe Marshall will add strength to the inside rotation that will still feature Quinnen Williams. The Jets still could use a young pass rusher to add to the end rotation. At this point, though, that might have to wait until next year.

Better or not?: Much better. Lawson alone would’ve been a huge improvement over what the Jets had last year.

It’s a little hard to know what to make of this group, because Saleh isn’t just transitioning the Jets from a 3-4 to a 4-3, but he’s also reinventing the way the Jets use their linebackers. The two additions from the draft are both college safeties, and it remains to be seen if the move to linebacker will be an adjustment or just basically the same as what they had been doing. Davis is a former first-round pick and a true middle linebacker, but he was a bit of a bust in Detroit. There’s potential here and probably better talent than what the Jets had the last few years, especially if C.J. Mosley returns healthy. It’s just hard to see exactly what Saleh is doing until this group is on the field.

Better or not?: Probably. At least on paper. But seeing will be believing.

It is still stunning that the Jets didn’t pursue any cornerbacks in free agency, and maybe even more shocking that they then waited until the fifth round of the draft to address this position. That suggests they’re comfortable with Bryce Hall and Bless Austin as their starters, which is a little hard to believe. Maybe they’ll add a veteran free agency (Hello, Richard Sherman?) and make this all seem better. For now, though, it looks like they’re just going to throw all their young players on the field, including the two fifth-rounders with some potential, to see how it all shakes out.

Better or not?: Honestly, it’s hard to see how.

The Jets believe that Joyner could be a huge addition for their defense, and will play a potentially pivotal role in Saleh’s scheme. He’s certainly an upgrade over the departed Bradley McDougald. And that’s good, because the only other thing the Jetsdid at this spot was re-sign Marcus Maye. Ashtyn Davis figures to now be a starter after a rocky rookie season. And Maye could be very motivated while playing on the franchise tag and seeking a long-term, blockbuster deal.

Better or not?: Probably, depending on what they get out of Joyner and how they use him.

Look, they were a dysfunctional, 2-14 team a year ago, so how could they not be better? They’ve added a lot more talent on offense than they did on defense, but the addition of Saleh — the 49ers’ old defensive coordinator — should immediately make the defense a lot better than it was. As for the offense: Again, how could it be worse than it’s been the last two years? Adam Gase is gone and the Jets have added firepower at receiver and running back and even punched up the offensive line.

In the end, though, it will all come down to this: How good is Wilson going to be right out of the gate? The Jets undoubtedly surrounded him with most of what he needs. It’s easy to see how, with an average, veteran quarterback, the Jets could be a .500 team. If Wilson plays like Patrick Mahomes, then start buying playoff tickets. More likely, though, he’ll have ups and downs like most rookies do.

Better or not?: On paper, the talent level is definitely superior to what they had last year, and it sure seems like the coaching is going to be better too. So it’s your move, Zach. There are enough pieces in place for success. Just how much success, and how much better the Jets are, will depend on how quickly Wilson starts playing like a star.