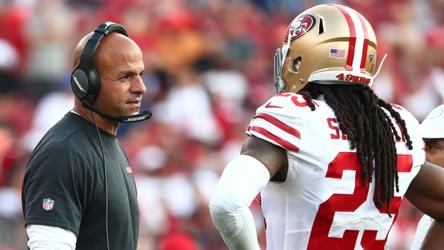 Having spent the past three seasons coaching Richard Sherman, new Jets head coach Robert Saleh knows what the veteran cornerback brings to an NFL team. Saleh (2017-20) and Sherman (2018-20) worked together as a pair of key figures on the San Francisco 49ers‘ defense.

Sherman, who is set to enter his ninth year in the NFL, remains a free agent. Could he reunite with Saleh in New York?

A report published Sunday by ESPN’s Rich Cimini said that Saleh was “interested in reuniting with Sherman” but “a few factors” from the Jets’ 2021 NFL Draft to the cornerback’s preferences kept both sides apart.

In Saleh’s defense, Sherman started all 34 regular-season games he played from 2018-20, totaling 94 tackles (six for loss), four interceptions (one touchdown), 16 pass breakups and one fumble recovery.

“First and foremost, whether or not they can win in man coverage,” Saleh said. “That’s the big thing. Every single game comes down to 1-on-1 situation. So, obviously, foot speed and all that stuff. There’s a million different ways to skin a cat. Like, Richard Sherman is 6-foot-3, 32-inch arms or 33-inch arms — whatever it is — and you guys see he’s a big, lanky guy. And then you’ve got Jason Verrett who’s this little, itty bitty guy. Completely different body types and skill sets, but they both win in man coverage. And then Emmanuel Moseley, who we had in San Francisco, was in the middle somewhere.

“So there’s a million different ways to skin a cat. But the end result of winning in man coverage and getting off of those money downs are what’s important.”