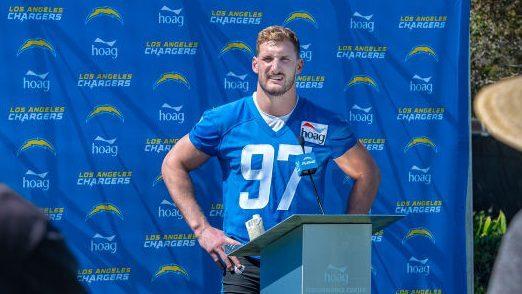 As the Chargers’ offseason program came to a close, Joey Bosa said “it’s been tough” learning the new defense that head coach Brandon Staley wants the team to run during his first season on the job and the educational process hasn’t come to an end.

The Chargers are now in training camp and Bosa is still familiarizing himself with what’s being asked of him. Bosa said he’s usually been “solely focused on how I’m rushing each day,” but shifting from defensive end to outside linebacker means that he’ll be asked to do other things at times.

Adjusting to that part of his portfolio has been the biggest difference as he heads into his sixth NFL season.

“It’s not as much the athletic part of it as it’s just seeing in the field, understanding the formation, seeing shifts, getting the calls,” Bosa said, via the team’s website. “I got to call last year. It was my call. I line up and do what I have to do. Maybe there’s a couple of checks here and there. But, there’s a lot going on. There’s a lot of moving pieces. I think it’s great. It’s a dynamic defense. A good defense shouldn’t be easy to learn in two days, so it’s a fun challenge.”

Bosa said he expects to “make a few mistakes here and there” as he gets everything down in camp, but that the defense will be “second nature” by the time the regular season is underway. The sooner the better for the Chargers’ hopes of contending in the AFC West this season.