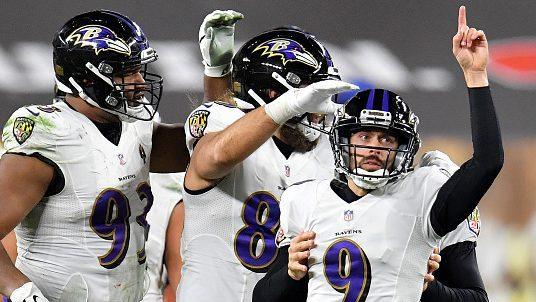 One of the best games of the 2020 NFL season ended with Ravens kicker Justin Tucker hitting a 55-yard field goal to beat the Browns. But Ravens coach John Harbaugh says that minutes earlier, Tucker nearly convinced him to let him kick an NFL-record 68-yard field goal.

Harbaugh relayed the story of that game in a discussion with high school coaches on Hudl, and he said that just before quarterback Lamar Jackson returned from the locker room and threw a 44-yard touchdown pass after the two-minute warning, Harbaugh thought he was going to be down to playing wide receiver Willie Snead at quarterback because Jackson had already gone to the locker room and backup quarterback Trace McSorley had just suffered a knee injury.

“Tucker, who always runs right by me when he wants to kick a field goal, comes clicking by me, spins around and looks at me like, ‘Am I kicking the field goal?’ And I look at him and I go, ‘It’s 68 yards.’ He goes, ‘Yeah.’ I go, ‘Can you make it?’ And I think it might be a good idea. He looks at me and he says, ‘I think I’ve got a better chance than Willie.’ And I’m like, ‘I think you might be right,’” Harbaugh recalled.

Fortunately for Harbaugh, at that moment Jackson ran back to the field from the locker room and said, “I got this, coach.”

Harbaugh’s memory of the game wasn’t completely correct, as it actually would have been a 62-yard field goal for Tucker where the Ravens had the ball at the time. But the mere fact that Harbaugh thinks a 68-yard field goal would be a valid idea shows incredible faith in Tucker.